Now representative of the bustling Golden Gate community, the Colombo Market Arch is a historic remnant of San Francisco's early 19th and 20th century markets that ran until the 1960s. Built in 1874 by Italians from Genoa, this arch was a gateway to an old world style market. Gas lit lanterns and stalls for horses, the Colombo market modeling itself after London markets, it originally had seventy six large stalls the area of one block. The market and other surrounding businesses merged into a whole district, but the area market declined in the sixties due to it's prime location. In 1965, the whole area was razed and the Golden Gateway development was built in its place. The arch is the only representation of early San Franciscan market life.

The Colombo Market arch in Sidney Walton Square Park at the Golden Gateway development in June of 1965. Photo: Ken McLaughlin, The Chronicle 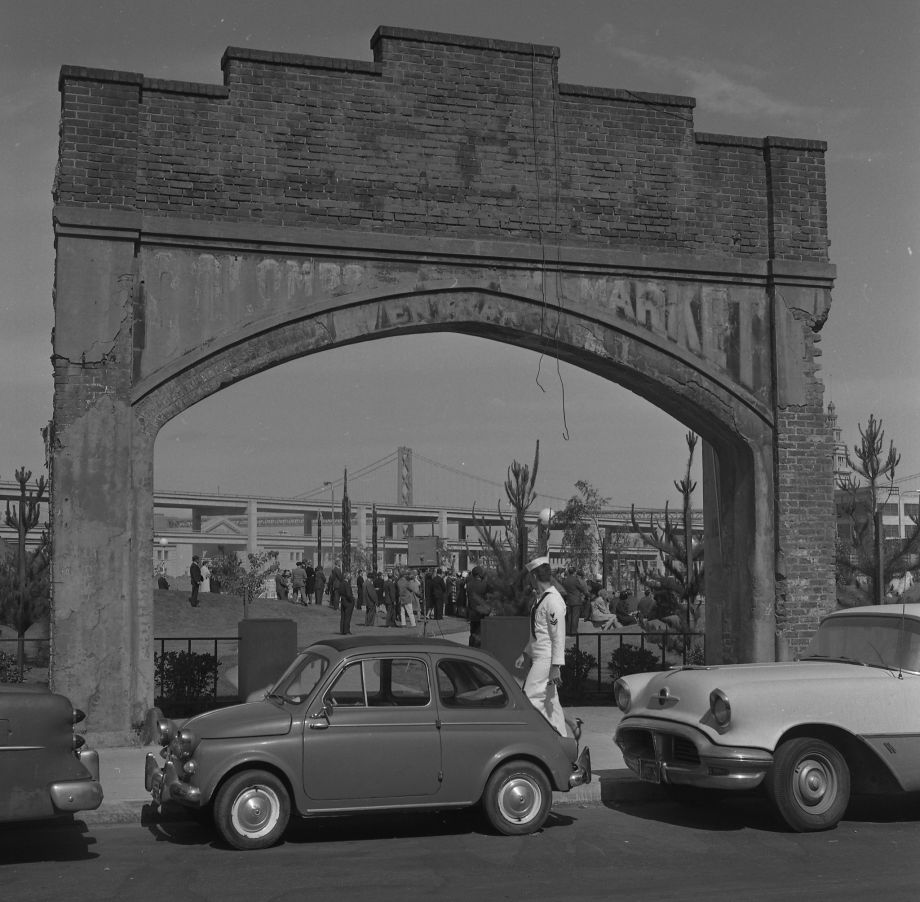 Before they constructed the Colombo Market, the Genoese Italian traders hauled their produce into town on horse drawn wagons. In North Beach, the Italisn centre of the city, farmers began to set up their produce on the sides of Sansome Street in order to sell to businesses and residents.

This makeshift system worked of a while, but as the demand grew, a larger market area was needed. That's why in 1894 the Genoese got together and formed the San Francisco and San Mateo Ranchers’ Association and began building the Colombo Market, two blocks east of the old sidewalk market. 76 stalls occupied the Market facing the street and could be rented for $9 a month. The entire perimeter was lit up by gas jets at 9 foot intervals, as much of the trading was done in the dark of night.

The market sprung to life at around 3 a.m. when produce laden horse wagons would arrive, turning into their sheds without being directed. The traders would then unload the horses, stacking their produce up ready for the early morning customers. By 4 a.m. the buyers from the big retail markets would arrive with their orders. By 6 a.m. the market was bustling with buyers from all kinds of shops, restaurants, and boardinghouses.

By 9 a.m., the market would almost be over. The big buyers were gone, and a few savvy housewives appeared. At that late hour, the dealers just wanted to get rid of any stock they had and would sell for half price.