The Duluth Depot is a historic train station built in 1892 in Duluth, Minnesota near the shores of Lake Superior. At its height, it served seven rail lines and saw 5,000 passengers a day coming and going on fifty trains. It no longer serves as an intercity passenger train station (this may change in the near future; people can ride trains along the North Shore Scenic Rail Road line) but is now the home of four museums: The Lake Superior Railroad Museum, the Duluth Art Institute, The St. Louis County Historical Society, and the Veterans Memorial Hall, which is housed in the historical society. Several organizations operate in the depot: the North Shore Scenic Railroad, the Duluth Playhouse, the Matinee Musicale, the Minnesota Ballet, and the Arrowhead Chorale. Over 250,000 people visit the depot each year. It was listed on National Register of Historic Places in 1971.

The Duluth Depot was built in 1892 and saw over 5000 daily passengers at its peak.

A train on display at the railroad museum 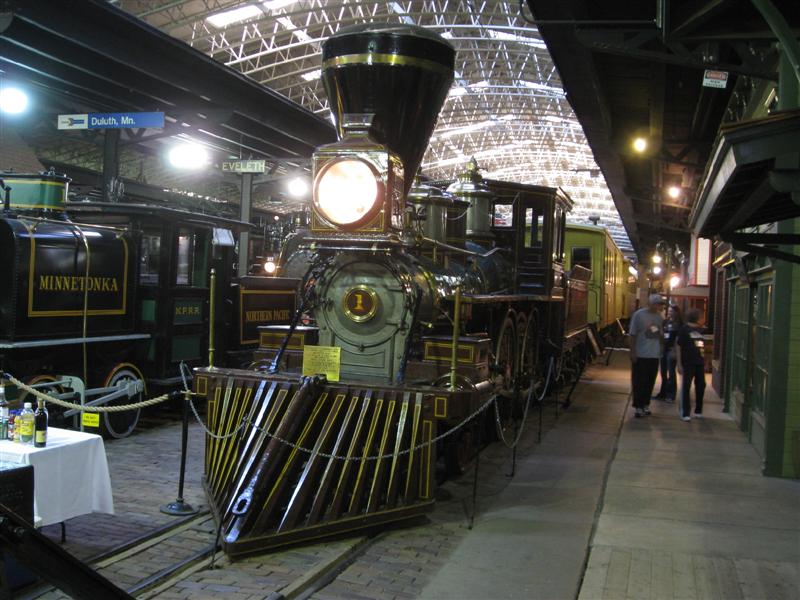 The depot was built on the same location as a much smaller, wood-framed depot that was constructed in 1870. This depot remained in place and operated during the construction of the new one which was finished in 1892. The new depot was designed by the Boston architecture firm Peabody and Sterns in the French-Norman style. It is constructed with local materials including granite, sandstone, and yellow brick. Notable architectural features include towers and steep roofs. It took almost two years to build and cost around $615,000. The purpose of the architecture was to give a good impression to people passing through the station and to reflect the vibrant energy of Duluth's growing population.

For decades, the depot served seven rail lines: the Duluth & Iron Range, the Duluth Missabe & Northern, the Duluth Superior & Western, the Great Northern, the Northern Pacific, the St. Paul & Duluth, and the Duluth South Shore & Atlantic. It also housed the depot's offices, a newsstand, a barber shop, a parcel room, and a lunch room. Due to decreased demand for passenger rail service throughout the country, ridership declined at the depot and the last train left in 1969 with ten people on it, all of whom wanted to be among the last few to ride a train from the station.

Fearing that the depot would be demolished, Duluth citizens came to its rescue. As a result of their efforts, the depot was saved and named to the National Register of Historic Places in 1971. It is after this point that passenger service returned to the depot. Amtrak offered rail service to and from St. Paul beginning in 1974. This was popular but after ten years it ended—the last train departed on Easter Sunday 1985—due to lack of funding.

Along with the Amtrak service, the depot saw a rebirth in other ways during the 1970s. A group of four prominent Duluth citizens came together and started a campaign to renovate the station and transform it into a center for arts, culture, and history. The Duluth Junior League raised $250,000 and the rest of the money, which amounted to $4.5 million dollars, came in the form of grants. The construction of a new train museum was included in the plans. The entire project, which began in 1973, went over budget but it was completed by the late 1970s.

The depot continues to be a place to for arts, culture, and history. However, a new rail line, the Northern Lights High Speed Rail, may return passenger service—and high speed rail—to the depot in the coming years. Minnesota received a federal grant to undertake a preliminary environment and engineering review of the project.

This short drive (or extended walk) through the heart of Duluth starts at the city's historic train depot and includes a variety of landmark buildings. The tour is a work in progress, and more entries will be added soon.