Memorial and Monument for Jim Thorpe

There is a memorial to the man highly regarded as the greatest athlete of the 20th century in northeastern Pennsylvania. His remains are controversially buried here. Larger-than-life bronze statues and information boards adorn the grounds telling of his great feats of unmatched athleticism. The memorial is free to the public, and open 365 days a year. 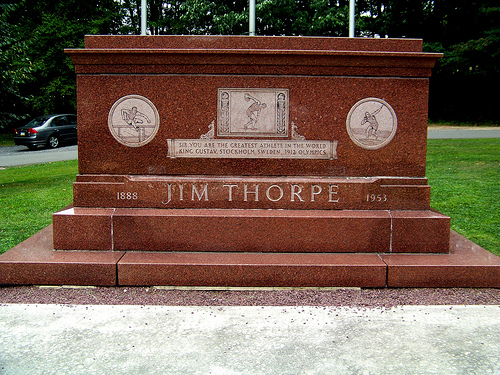 One of the statues at the Memorial 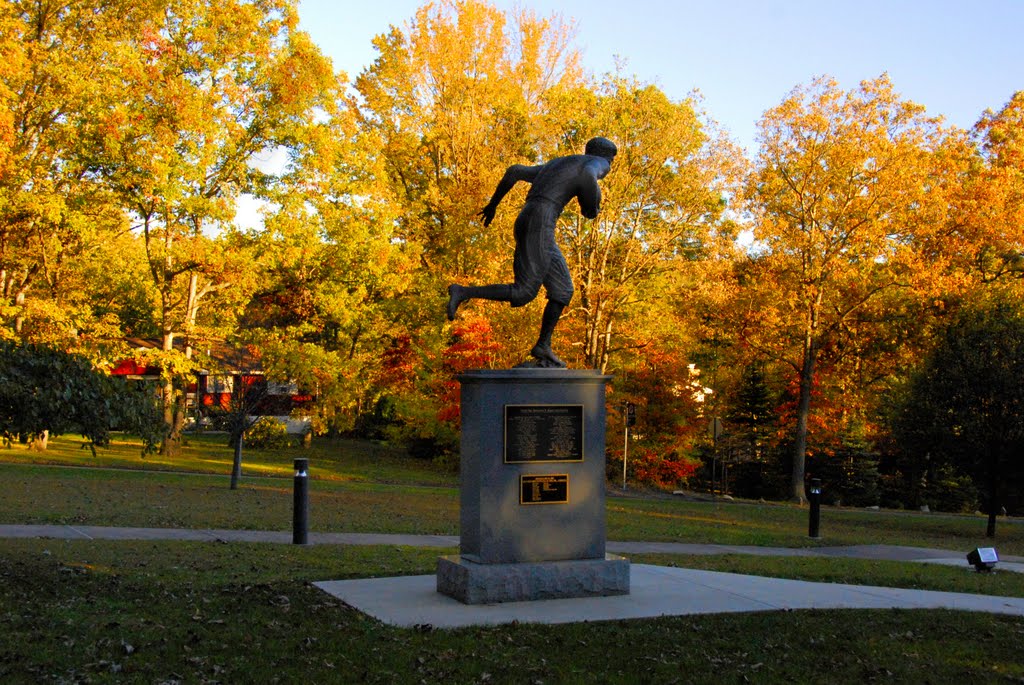 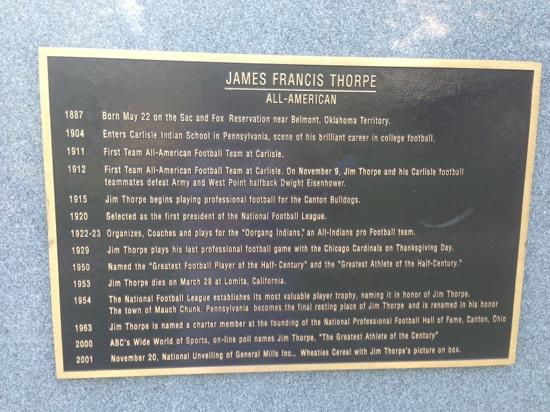 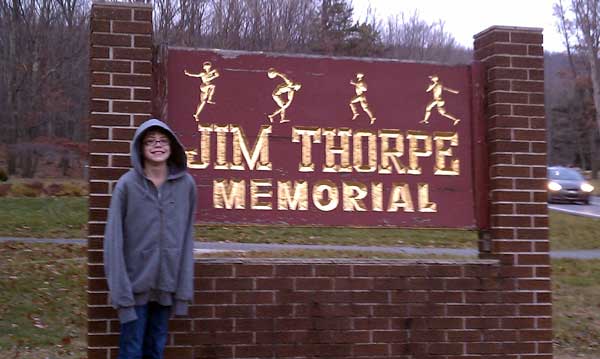 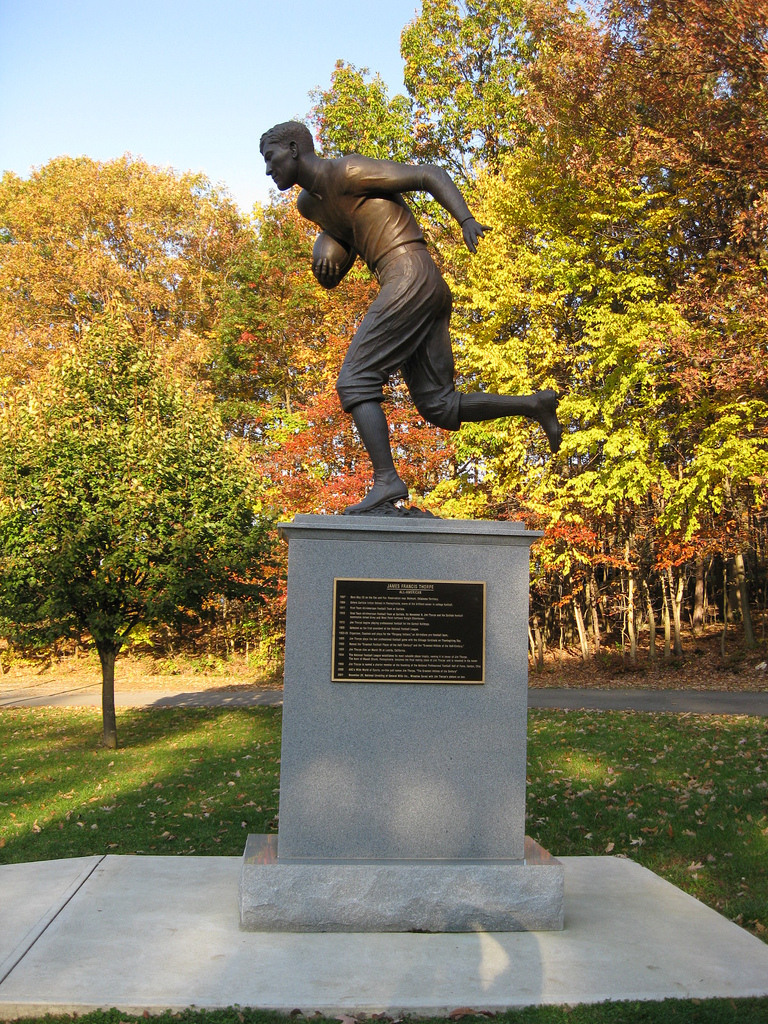 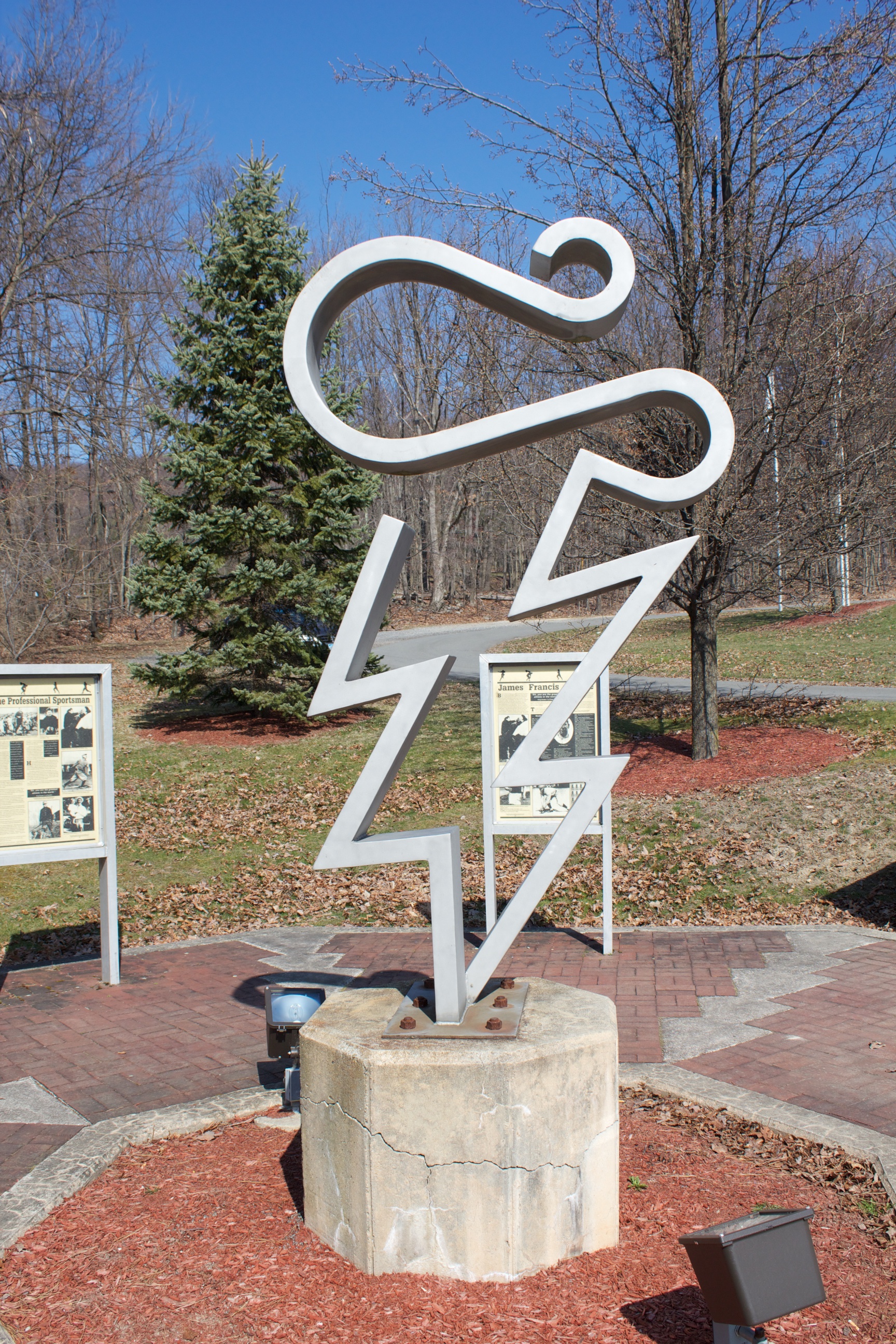 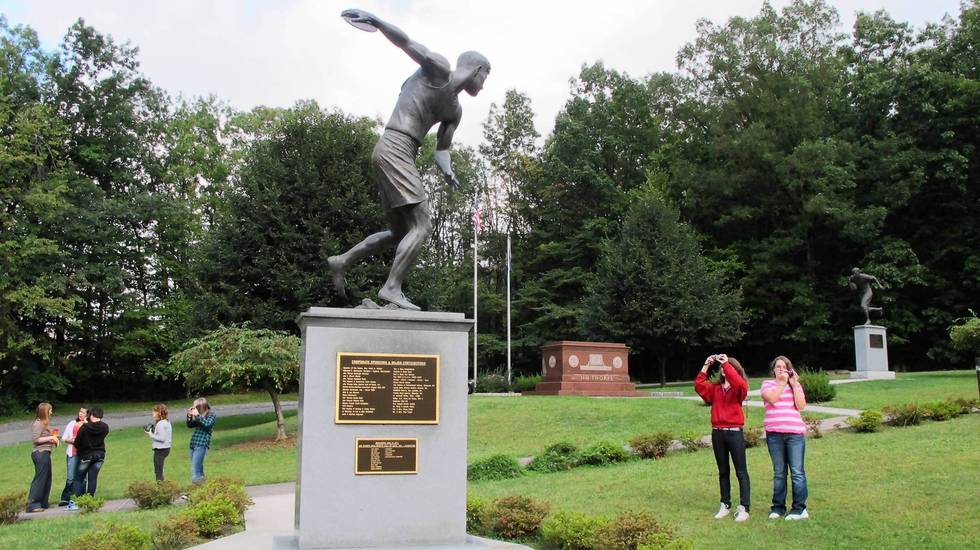 Close up photo of the inscription on the mausoleum. 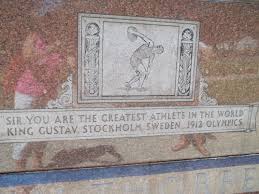 One of the many information placards surrounding the memorial. 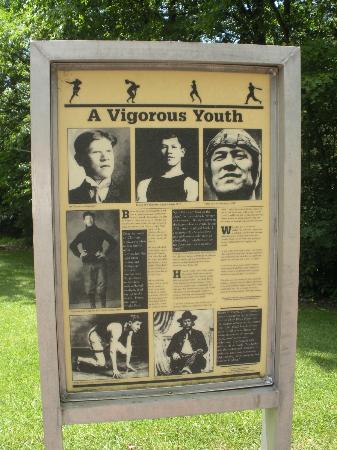 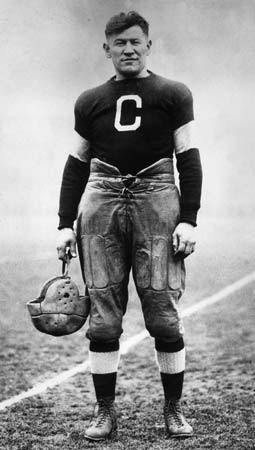 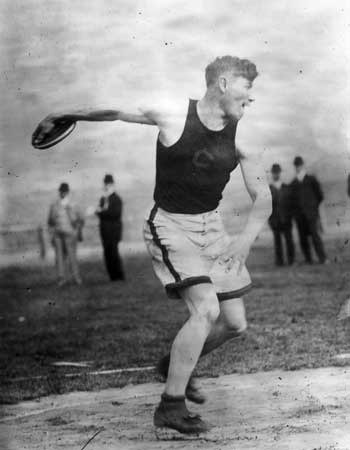 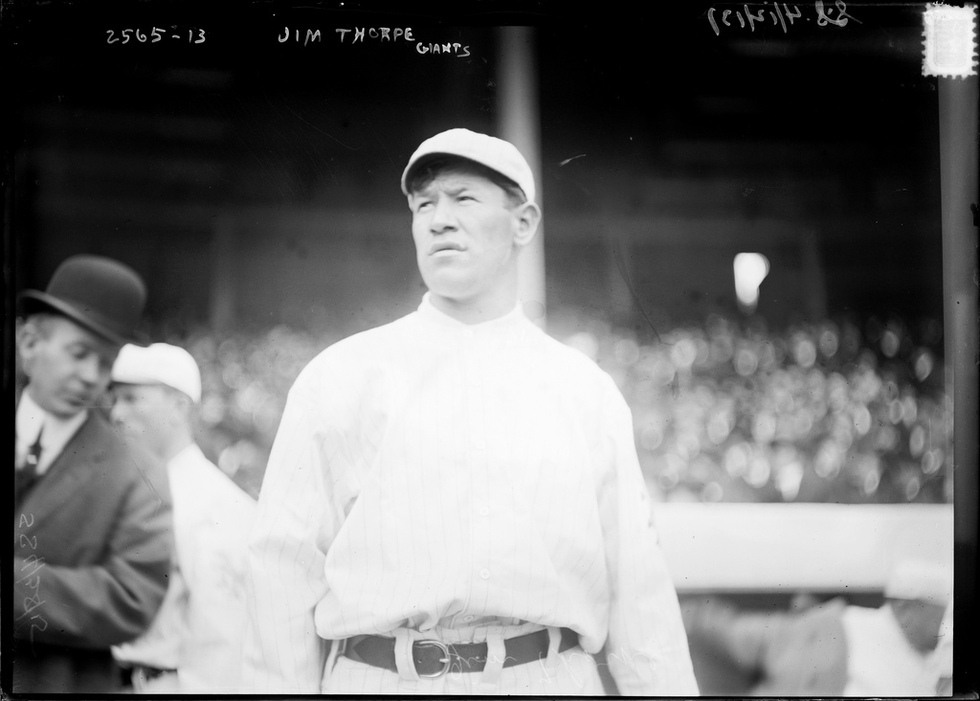 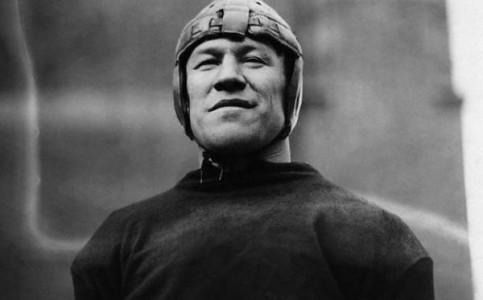 A Native American; an Olympic hero controversially stripped of his medals; a professional baseball player; a professional football player; James Francis “Jim” Thorpe was all of this and more.  He is buried in a town that he had never set foot in while he was alive; a town far from the Sac and Fox nation that he was born and raised in; a town that took his name as its own after he had passed.


The Jim Thorpe Memorial site is on North Street (Pennsylvania State Route 93) in Jim Thorpe, PA. The grave site, a red granite mausoleum, rests on mounds of soil from Thorpe’s native Oklahoma, the New York Polo Grounds and from Stockholm's Olympic stadium, where Thorpe won gold medals in the decathlon and pentathlon in 1912. The mausoleum is emblazoned with his name and a quote from Sweden’s King Gustav V, who stated after the 1912 Olympics that Thorpe was the world’s greatest athlete.  James Francis Thorpe is buried in his favorite white buckskin jacket along with a rosary.

The monument also has several information boards stating facts from his life and statistics from his athletic events as well as images depicting Thorpe competing in the numerous sports in which he excelled, including track and field, baseball and football.

On the grounds, visitors will find a 2007 statue depicting Thorpe as a football player, and another statue, dedicated in 2011, showing Thorpe with a discus.

The Thorpe memorial also includes an abstract sculpture, The Spirit of Thunder and Lightning that was dedicated in 1998. Surrounding the sculpture, several wayside markers provide highlights from Thorpe’s life and athletic achievements.

In recorded history, no other individual has come close to Jim Thorpe in all-around athletic versatility. Born in 1887 in Prague, Oklahoma, Thorpe grew up in the Sac and Fox nation.  Early in life he suffered the loss of his twin brother and both his parents. His immeasurable skill with every sport he attempted propelled him beyond his humble origins and the racial prejudice he faced as a Native American.

Jim Thorpe's Native American Name means is "Wa-tho-huck" which means "Path lit up at night by a bolt of Lightning."

As a student at the Carlisle Indian Industrial School, he was an All-American in football, playing halfback, defender, punter, and place-kicker.

He quickly mastered nearly every sport offered at Carlisle, including basketball, lacrosse, tennis, handball, bowling, golf, swimming, hockey, boxing, and gymnastics. He even won a ballroom dancing contest. It was in track and field, however, where he really excelled.

Participating in the 1912 Stockholm Olympics, Thorpe won both the pentathlon and the decathlon, and finished tied in fourth for the high jump and seventh in the long jump; a feat unparalleled to this very day.

However, in 1913, he was controversially stripped of his Olympic medals when it was found that he had violated the amateur rules of the Olympics by playing minor league baseball in 1909 and 1910. His medals would not be reinstated until 1982; nearly three decades after his death.

His sports legacy continued after the Olympics and he played both major league baseball and professional football at the same time. Thorpe served as president of the American Professional Football League, which would later become the National Football League.  James Francis Thorpe has been inducted into the pro football, college football, US Olympic, and national track and field halls of fame.

The Mauch Chunk towns, former mining and resort communities, were searching for an economic boost when they agreed to build a memorial to Thorpe.  By conducting the proposed merge and changing their combined name to Jim Thorpe, local politicians hoped to attract the proposed pro football hall of fame and lead to the construction of other tourist destinations.

Other family members had planned to bury Thorpe on tribal land in Oklahoma, and were conducting a traditional feast the night before the scheduled funeral.  The ceremony came to an abrupt halt when Thorpe's widow barged in. Accompanied by state troopers and a funeral hearse, Patsy seized the body and simply drove away.

Thorpe’s seven children remained divided over the following decades about his final resting place. The two surviving sons are continuing legal efforts to have his remains returned to Oklahoma.

In October of 2014, the Philadelphia-based 3rd U.S. Circuit Court of Appeals threw out a ruling by a U.S. District judge that would've allowed Thorpe's remains to be moved to American Indian land in Oklahoma, ensuring that, for the time being, Jim Thorpe's grave site would remain in the eastern Pennsylvania town that bears his name.