The Nelson T Gant house is a historical location in Zanesville, Ohio. Located in the homestead of Nelson T. Gant, a former slave and conductor on the Underground Railroad. The location is owned by the Nelson T Gant Foundation, which seeks to restore the Gant homestead so that others may learn of the legacy of Nelson Gant.

View of the Gant house from the front. 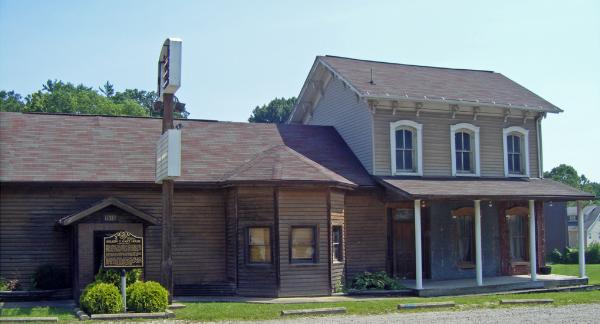 Historical Marker for the Gant House 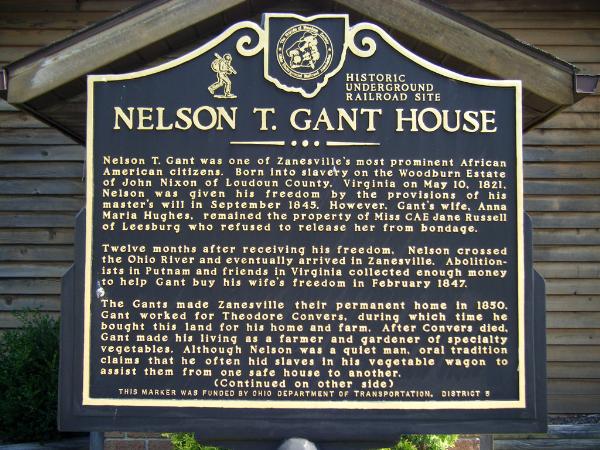 Front Door of the Gant Homestead 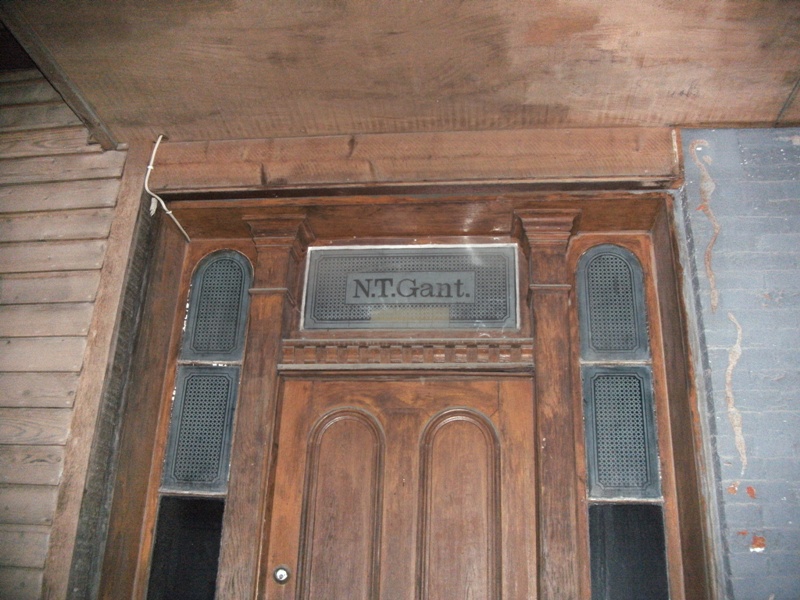 Nelson Gant was a slave on a tobacco plantation Loundoun County Virginia in 1821. Being a quiet, but at the same time very clever, child, he gained the favor and friendship of his owner, John Nixon, and earned that friendship through Gant's hard work and good attitude. Nelson met a fellow slave by the name of Anna Marie Hughes, and they were married in May 11, 1884, and since their marriage was overseen by a minister, they had the first legal slave marriage in the United States. But Nelson and Anna had to live separately with Anna having a different owner. Gant was granted his freedom in September of 1885, due to a Dixon's will, but he then faced a tough decision.

Gant had one year to leave the state, or else he would risk capture and potentially becoming a slave once again, but Nelson didn't want to leave his wife. He traveled to the town of Leesburg, where Anna's owners, the Russell family, were located. Slave auctions were fairly common on the steps of the Leesburg courthouse, and Nelson worked all year to earn money for Anna's freedom, but one of Anna's owners, Jane Russell, refused to free her. Nelson and Anna then disappeared and became fugitives in Washington DC, but were soon betrayed and taken back to Leesburg to stand trial, but were released and separated once again.

Nelson was taking in by friends in their home in Zanesville, Ohio. Although Zanesville itself was pro-slavery, the settlement across the river, Putnam, was very much against it, and with the help of abolitionist Quakers and his friends from Virginia, Nelson was able to buy Anna's freedom in 1847. Nelson and Anna would eventually settle in Zanesville, and Nelson built a two story mansion for his growing family. Even though Nelson and Anna had 12 children together, only 4 (Elizabeth, Sadie, Margaret, and Nelson Jr.) would survive into adulthood.

Nelson would go on to become a highly respected citizen of Zanesville. Along with building his house, Gant purchased 140 acres of farm land behind his house, which he subsequently turned into a park later called "Gant's Grove". Nelson's family would hold community picnics in the park, which would become one of the first integrated parks in Ohio, and would come to host many events, such as the Barnum and Bailey Circus, and games for the Negro Baseball League. Nelson also sold vegetables grown by his family and blocks of ice from the Licking River to the community.

Nelson would also play an important role as a conductor in the Underground Railroad after he met famed abolitionist Frederick Douglass while Douglass was speaking at a church in Putnam. Nelson would smuggle escaped slaves in his vegetable cart to freedom in Ohio. Both Nelson and Anna would enjoy many comforts through their later years, doing everything in their power to help the community of Zanesville, even donating $5,000 towards the construction of a church on South Street in Zanesville. Nelson's children would also go on to achieve success, becoming talented musicians, and Nelson Jr. and Sadie attended and graduated from Oberlin College, which was one of the first white colleges to admit African American students.