The Unconquered Statue sits outside the entrance of Doak S. Campbell Stadium, home of the Florida State Seminoles football team. Depicting a Seminole Indian on a horse, it is a symbol of perseverance for the FSU family. Overlooking Langford Green, the statue and pedestal stand a total of 31 feet tall. Before home games, the spear in the Seminole Indian's hand is lit, shining brightly for all to see.

During development of the Unconquered Statue. 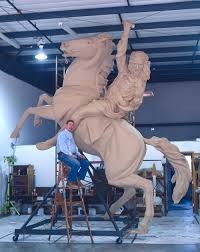 The Unconquered Statue with Doak S. Campbell Stadium as the backdrop. 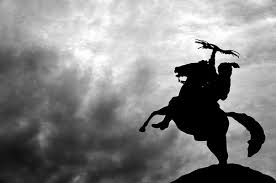 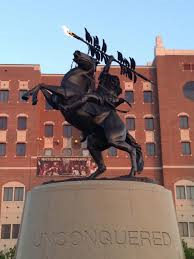 Florida State University is a school steeped in tradition and fanfare, and the Unconquered Statue outside of their Doak S. Campbell football stadium lends itself to that. This magnificent statue greets spectators as they approach the stadium for home football games with a flaming spear lighting the way. Although the statue itself is not very old, the history behind it is.

In 1962, FSU sophomore Bill Durham proposed to have a student dress as a Seminole Indian and charge the field before the start of home games. Originally, he received very little support and the concept was dropped until Coach Bobby Bowden came to Florida State University. In 1977, Durham met with the Seminole Tribe of Florida and obtained their approval to have a student dressed as Chief Osceola charge the field on a regal Appaloosa horse named Renegade at the start of every home game, thus creating one of the most-recognized and spectacular traditions in all of college football. Osceola and Renegade were first seen at the 1978 season-opening game against the Oklahoma State Cowboys (ironically enough) and have been a fixture at FSU home games since.

While many believe that the Unconquered Statue is a depiction of Osceola and Renegade, developer Steve Reilly has said this about the statue: “Bill Durham’s creation of Renegade and Osceola, which adds such an impact to our home football games, was obviously the inspiration behind this statue. However, the ‘Unconquered’ statue more broadly celebrates the human spirit that will not be defeated. This statue does not depict any particular person or event. Rather, it symbolically portrays the unconquered spirit of the Seminole people of the nineteenth century and the timeless legacy of that spirit that continues to burn bright into the future.” Reilly, an FSU alum and longtime booster and lawyer for the State of Florida Office of the Public Counsel, is the man responsible for the concept of the Unconquered Statue and headed the development of the statue along with Langford Green, named for George Langford who endowed the project for up to $1 million dollars. Reilly spent ten years developing the project meticulously before it was actually completed in 2003. The original artist worked for two years on the project before dropping out due to disagreements with the university about allowing them to retain all rights to the statue. He was replaced by Fritz White, an Ohio native living in Colorado who specializes in Native American-themed artwork.

The statue, which overlooks the Williams Family Plaza at the North end of Langford Green outside of the entrance of Doak S. Campbell Stadium, stands thirteen and a half feet tall atop a seventeen and a half foot pedestal, totaling 31 feet in height. The statue of a Seminole Indian astride a rearing horse, spear in hand, was unveiled on October 10, 2003, the night before Florida State played the University of Miami. It has become a tradition that the spear on the statue is lit the night before a home game and is left burning until sunrise the morning after the game.