Formerly known as Fort Gadsden Historic Site until 2016, Prospect Bluff Historic Sites is comprised of the ruins of two forts, one of which was built in 1814 and the other in 1818. Its location along the Apalachicola River made it a very strategic location, a fact not lost on the British who were fighting against the United States in the War of 1812 (Spain officially controlled Florida at the time but never made an effort to colonize it), which lasted until 1815. The British constructed the first fort, called British Post, and allied with Seminole Indians and escaped slaves (and free African American citizens) against the Americans during the war. Upon the conclusion of the war, the British left but the Seminoles and African Americans remained. As such, the fort, which became known as the "Negro Fort," continued to serve as a beacon for escaped slaves and a thorn in the side of the United States, which saw it as a threat against the institution of slavery. The Americans built the second fort, called Fort Gadsden, to support its effort to gain control over Florida from Spain and fight the Seminoles during the First Seminole War, which took place c.1816-1819.

This historical marker provides information about the fort. 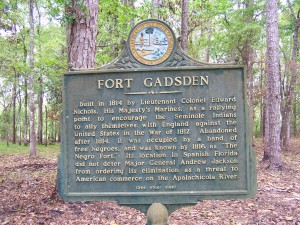 Site where the fort was built. 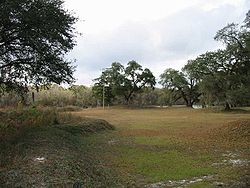 After the British departed, the fort was left under the watch of a man named Garcon, a former slave that performed duties in the fort while the British were there. The British also left weapons and other accessories there for the blacks and the Indians to use, even though most Indians returned to their villages after the British left.
The fort became known as the Negro Fort and considered a serious threat to the United States. In response, Major General Andrew Jackson ordered a fort, called Fort Scott, to be constructed upriver from Negro Fort for the purpose of attacking the stronghold. On July 27, 1816, the Americans attacked. A cannonball struck the magazine, causing an enormous explosion that killed 300 people including women and children. Only 33 survived and were forced back into slavery.

Recognizing the strategic importance of the site, Andrew Jackson ordered a Lieutenant named James Gadsden to build the second fort in 1818. Soldiers were stationed there until Spain ceded Florida to the United States in 1821.

Some considered General Andrew Jackson's expedition of 1818 as treasonous. Congress did not grant him permission to act and used border incidents as justification to attack Negro Fort. While following the river, he destroyed more than just this fort. He also attacked Indian strongholds while moving down the river. He also captured two British soldiers that he eventually executed. These incidents cause an uproar in the Congress and the Cabinet but all of this died down shortly after Florida became part of the country.