Council Hall served as city hall for Salt Lake City between 1866 to 1894. It is currently home to offices of the Utah Office of Tourism and the Utah Film Commission. Council Hall was originally Salt Lake City Hall, built to replace an older, smaller city hall completed just six years earlier on the eve of the Utah War, a standoff between Latter-day Saints (Mormons) and federal troops. This small city hall was almost immediately inadequate for the growing city, so planning work on a new City Hall began by 1863.

Up close view of the building that now serves as the hub of tourism. 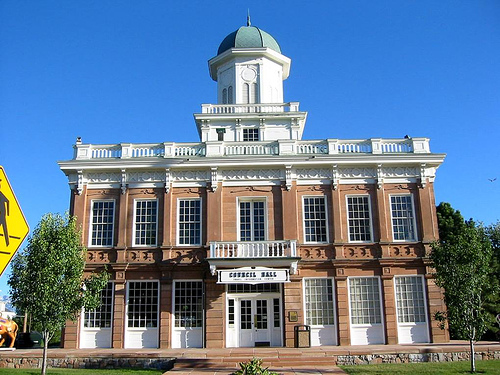 Erected between 1864 and 1866 to house Salt Lake City's governmental offices, Council Hall both served both as a municipal building and Utah Territorial Capitol until 1894.  It stands as a reminder of a tumultuous period in Utah history dominated by the struggle between the Church of Latter-Day Saints (LDS), whose members ostensibly founded and built Salt Lake City,  and the U.S. Federal Government.
The 1848 signing of the Treaty of Guadalupe Hidalgo that ended the US-Mexican war included the addition of what is now Utah. Back then, in 1850, the region had been named the “State of Deseret,” meaning honeybee; the beehive later became the state symbol. President Millard Fillmore named Brigham Young the first Utah territorial governor.
However, Between 1850 and 1890 Utah exhibited few of the political, legal, and economic customs typically found in a developing frontier community. The theocratic territory rejected public schools, Federal land policy, the two-party system, parts of the common law, and the primacy of civil courts. Moreover, Brigham Young and the LDS church actively engaged in polygamy, much to the dismay of the Federal Government.
Consequently, the Federal Government strayed from its usual territorial policy and, much like it did in the American South after the Civil War, adopted extraordinary measures to reconstruct Utah's political and social institutions, starting in 1857 with President James Buchanan sending troops to the territory and removing Brigham Young as territorial governor.
Nonetheless, in January 1866, City Hall was dedicated by George Q. Cannon, a prominent LDS leader. Many other LDS leaders attended the dedication, too, including Brigham Young. Despite the presence of the Federal Government in Salt Lake City, the LDS-dominated People's Party still proved highly influential. The mayor at the time was People's Party member Abraham O. Smoot, the first of six mayors that would use the building. However, because the Territorial Governor, the Mormon-dominated legislature and the Salt Lake City municipal officials shared Council Hall, much of the struggle for political control of Utah took place in the 60-foot-square, 2-story, red sandstone building.
Between 1862 and 1887, Congress enacted a series of laws banning polygamy, reforming Utah's judicial system, dissolving the Nauvoo Legion, and establishing a commission to supervise Utah voter registration and elections. It wasn't until 1890 when LDS President Wilford Woodruff issued his Manifesto that renounced polygamy and reduced the influence the church had in governmental affairs that tensions eased.  The People's Party's control of the Mayor's office effectively ended in 1890 when the Liberal Party (a non-Mormon party) gained control of city government. As a result, six years later in 1896, Utah entered the Union as the 45th state.
Originally it stood on the corner of First South and State Streets, but in 1961-1962, with funds supplied by the Church of Jesus Christ of Latter-Day Saints, the structure was dismantled and moved to the present location immediately south of the State Capitol.
Today, the building operates jointly by the Utah Office of Tourism and the Zion Natural History Association, the center offers restroom facilities, phones, vending machines, a multi-lingual Internet kiosk, for-sale books and Utah products, and free Wi-Fi during business hours: Monday - Friday, 9 am - 6 pm, Saturday - Sunday, 10 am - 5 pm. Parking is also available for easy access to the State Capitol building located across the street.