Like many buildings in the historical district in Alexandria, Virginia, the Lloyd House remains a part of American history. The house is both local and national significant. The house was constructed in 1796-1797 by John Wise, a prominent entrepreneur in Alexandria during this period, which also constructed the Gadsby’s tavern (1785) and operated another late 18th century tavern still standing today at the corner of North Fairfax and Cameron Streets. Before his death, George Washington was a guest in the house on occasion. John Lloyd, a wealthy merchant bought the house in 1833 and was owned by the Lloyd family until 1930s.Today the Lloyd House houses the administrative offices of the Office of Historic Alexandria (OHA), and the first floor and the yard are available for rentals and can accommodate up to 100 people, depending on the occasion. Constructed in the late eighteenth-century Georgian architectural style the structure was added to the National Register of Historic Places on July 12, 1976. It is and one of five buildings of the Georgian style remaining in the city. 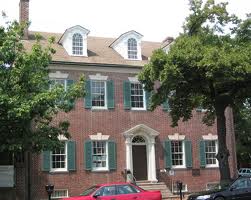 The Lloyd House, when it was built, was one of the finest examples of Federal domestic architecture in Alexandria and a splendid illustration of the post-colonial style that characterizes so much of early Virginia architecture. Aside its architectural significance the house is also historically significant. A number of prominent people lived here:  Charles Lee, a prominent layer who served as Attorney General In the presidential administration of George Washington and Charles Adams; Jacob Hoffman a wealthy merchant; William Albert Smoot, Jr., a lumber dealer, served as a Mayor of the city under the first city manager form of government and was a member of the Virginia house of Delegates etc.

Built in 1796-1797 this building has had a difficult time surviving throughout the ages. The building changed from being a simple house, to sugar refining building during the early 19th century, and a center for geological studies in the middle 20th century. Today, the Lloyd House houses the administrative offices of the Office of Historic Alexandria (OHA), and the first floor and the yard are available for rentals and can accommodate up to 100 people, depending on the occasion.

While the function of the building has changed over the years, it still remains an important aspect of American history. After surviving over hundreds of years the building can still be seen and touched by individuals who understand the significance of preserving the past.