The National Atomic Testing Museum (NATM) covers the period from the first test performed at the Nevada Test Site (NTS) on January 27, 1951, to the present. Among its exhibits portraying American nuclear history is a "Ground Zero Theater" which simulates the experience of observing an atmospheric nuclear test. Other exhibits include Geiger counters, radio badges and radiation testing devices, Native American artifacts from around the test area, pop culture memorabilia related to the atomic age, and equipment used in testing the devices. Other displays focus on important figures at the facility, videos and interactive exhibits about radiation.

One of the corridors at the National Atomic Testing Museum

Memorabilia on display at the National Atomic Testing Museum (Vegas.com) 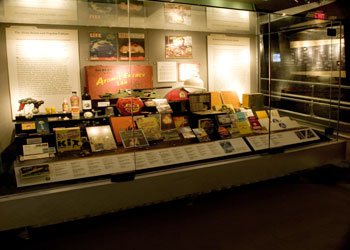 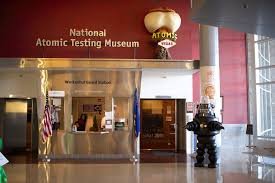 The National Atomic Testing Museum (NATM) teaches its guests about the events leading up to the establishment of the Nevada Test Site and the progression of the Test Site from the above-ground tests to underground tests and non-nuclear activities.  The actual test site was located about 65 miles northwest of Las Vegas and covered a land area of 1,375 square miles (bigger than the state of Rhode Island). The Nevada Test Site played a major role in the American Cold War.  It operated here for nearly 40 years (1951-1992), conducting experiments with new weapons designs and defensive measures in order to protect the nation against a potential nuclear war.  There were 928 atomic tests conducted at the site during those years – 100 atmospheric tests and 828 underground tests.  Artifacts telling the history of the important research and conclusions made from these tests are on display in the NATM.

People can visit a replica of the Control Point where the scientists waited and conducted their countdown before detonating any nuclear device.  Guests can participate in a tour of the facility where they will learn a great deal about the history of atomic testing and its relevance to national security and international stability. In the “Ground Zero Theater,” visitors can experience what it would have been like to observe an atomic blast. The theatre is a simulated bunker.  The seats rumble and guests are blasted with a rush of air when the “bomb’ explodes.

The museum exhibits are arranged in chronological order, starting with atomic weapons development in the 1940s through the early 1960s.  It also displays artifacts and educational materials about more recent weapon development and atomic research, such as items related to “Stockpile Stewardship” or simulated test programs.

But there is more to the museum that simply education about the atomic weapons development process.  Pop culture items from the time period, which reflect the country’s interest in all things atomic, are also on display.  These items include comic books, Christmas ornaments, toy atomic rings, candy (i.e. the “Atomic fireball”) and even recipe books.

The museum is open to the public daily until 5:00 PM.  From Monday through Saturday, the museum is open at 10:00 AM and on Sundays, it is opens at noon.  Ticket prices vary depending on age: General adult admission costs $22.00, while adolescents aged 7-14 are admitted for $16.00 and children under age 6 are free.  There is also an option for a family package which admits two adults & up to 3 kids for $65.00.

The staff at the museum suggests that visitors allow 2-4 hours to appreciate all of the exhibits.