In 1869, the Union Pacific and Central Pacific railroad companies were in a race to connect the country by rail for the first time in history. It marked what many contemporaries viewed as a great and difficult achievement. With the sweat and hard work of many men, most of them immigrants facing obstacles and dangerous situations along the way, 1,776 miles of track were laid from the Atlantic to the Pacific coast. This achievement changed and revolutionized the country in many ways, economically and as well for the pleasure of the people. In 1869, the Union Pacific and Central Pacific railroad companies finished their long journey and met in Promontory Summit, in Utah where the last spike connecting their rail lines would be driven. Recognized as a national park, people all over the world can visit this location and see for themselves where the golden spike ceremony took place as well as a re-enactment of the driving of the last spike. Visitors can also see the beautiful replica locomotives on display at the site. 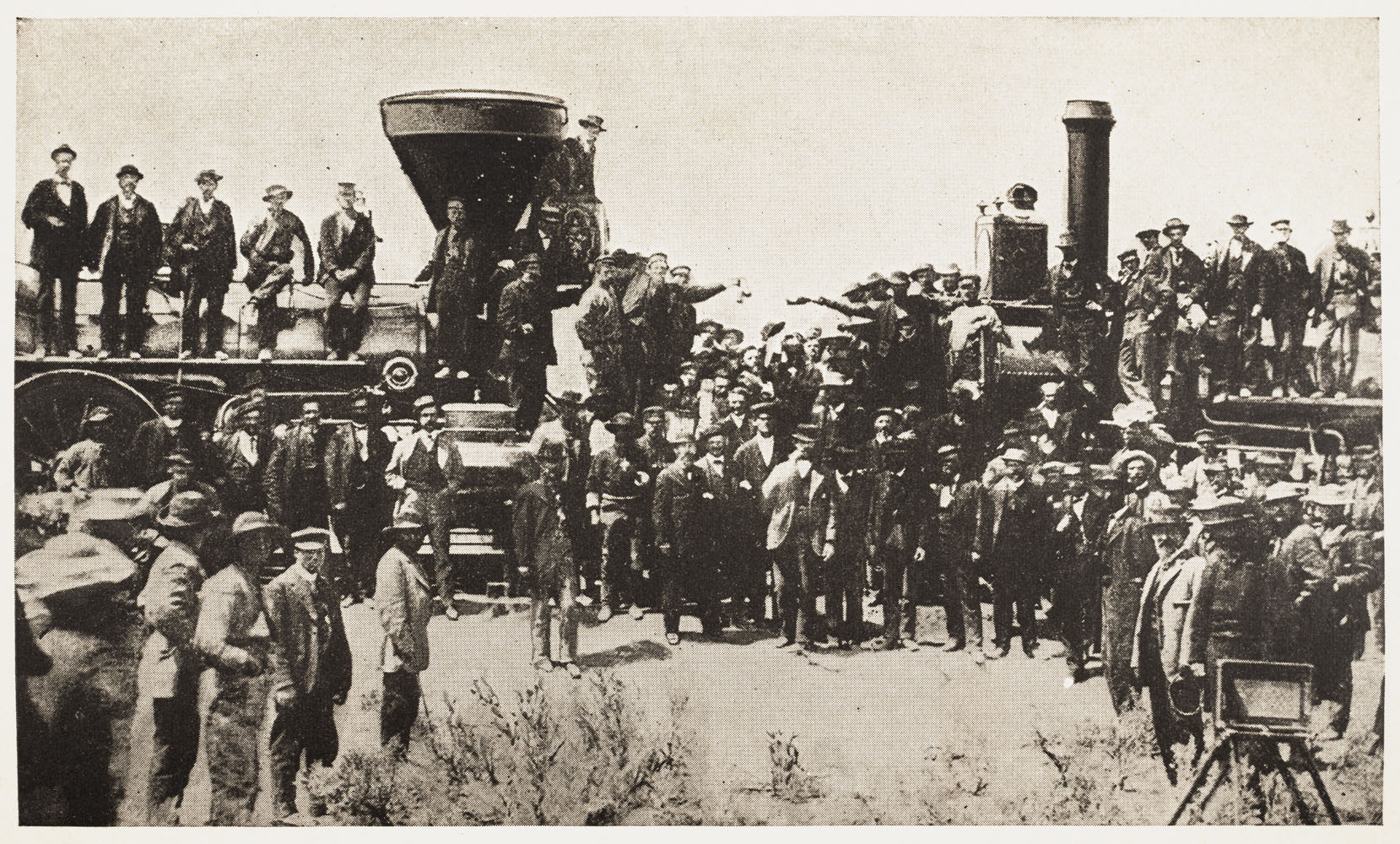 Meeting of the railroads. 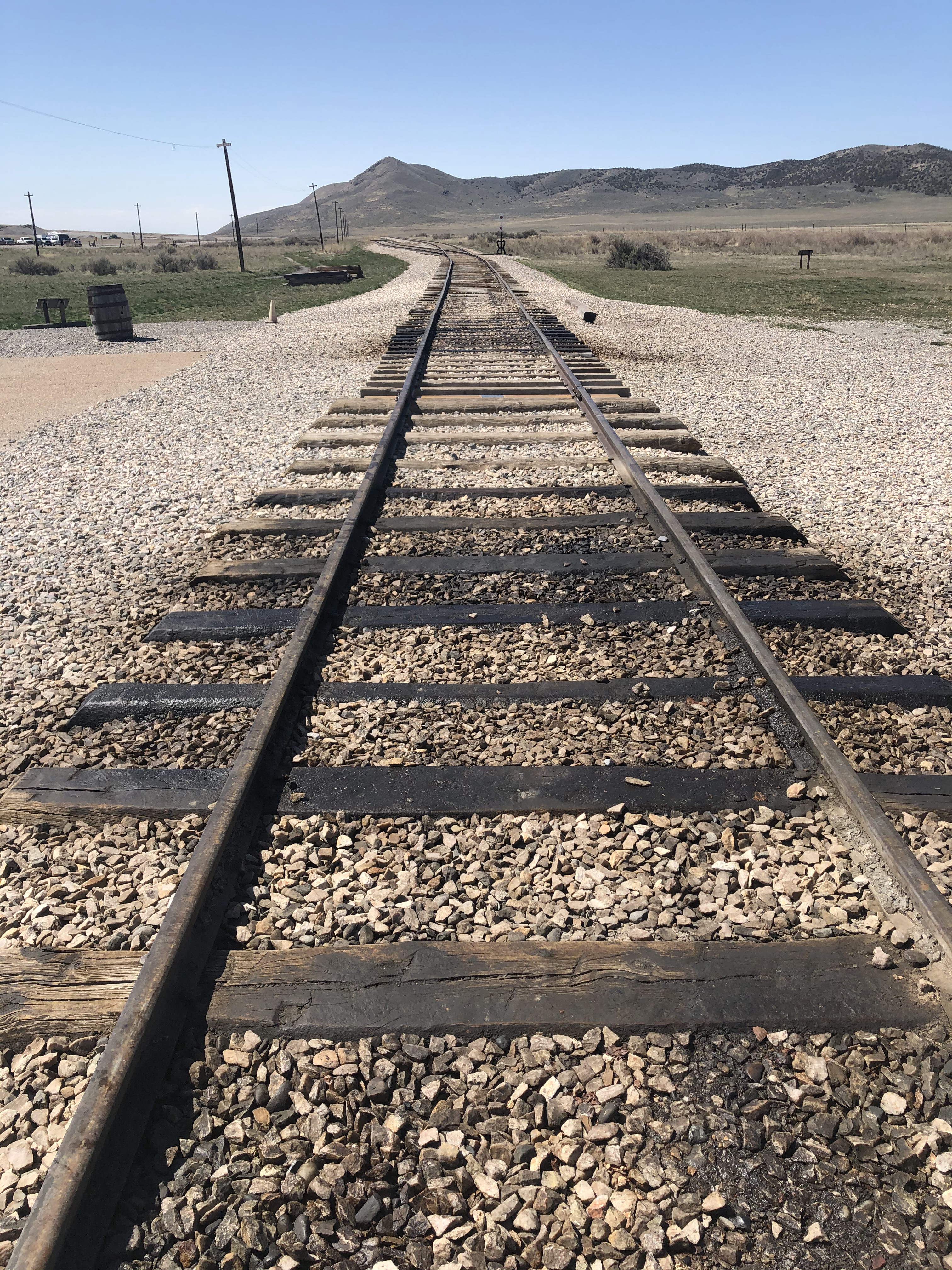 Laurelwood tie with a silver plaque in the center. “The last tie laid on completion of the Pacific Railroad, May 1869.” 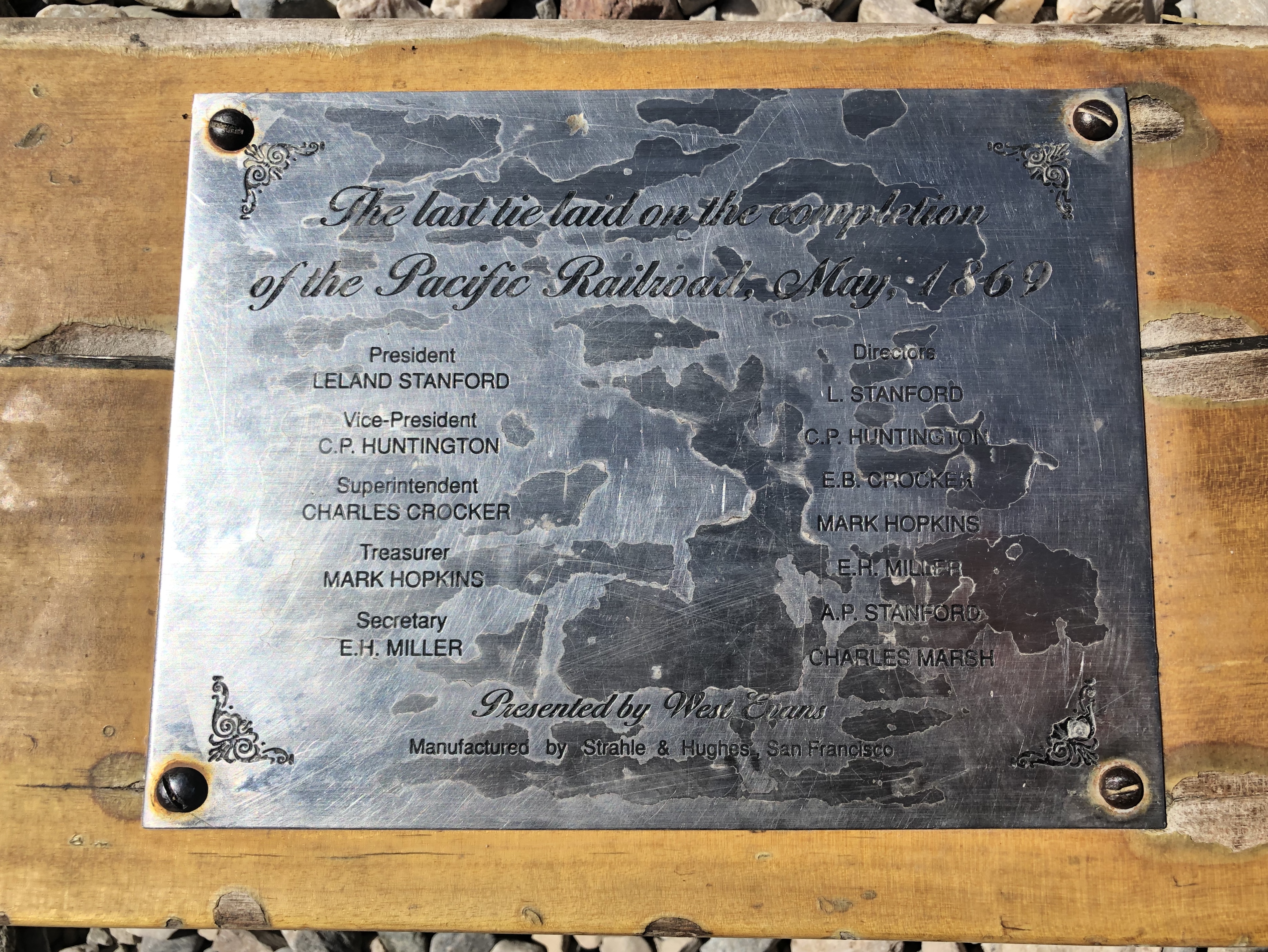 A telegraph line that would run along side the transcontinental rout. 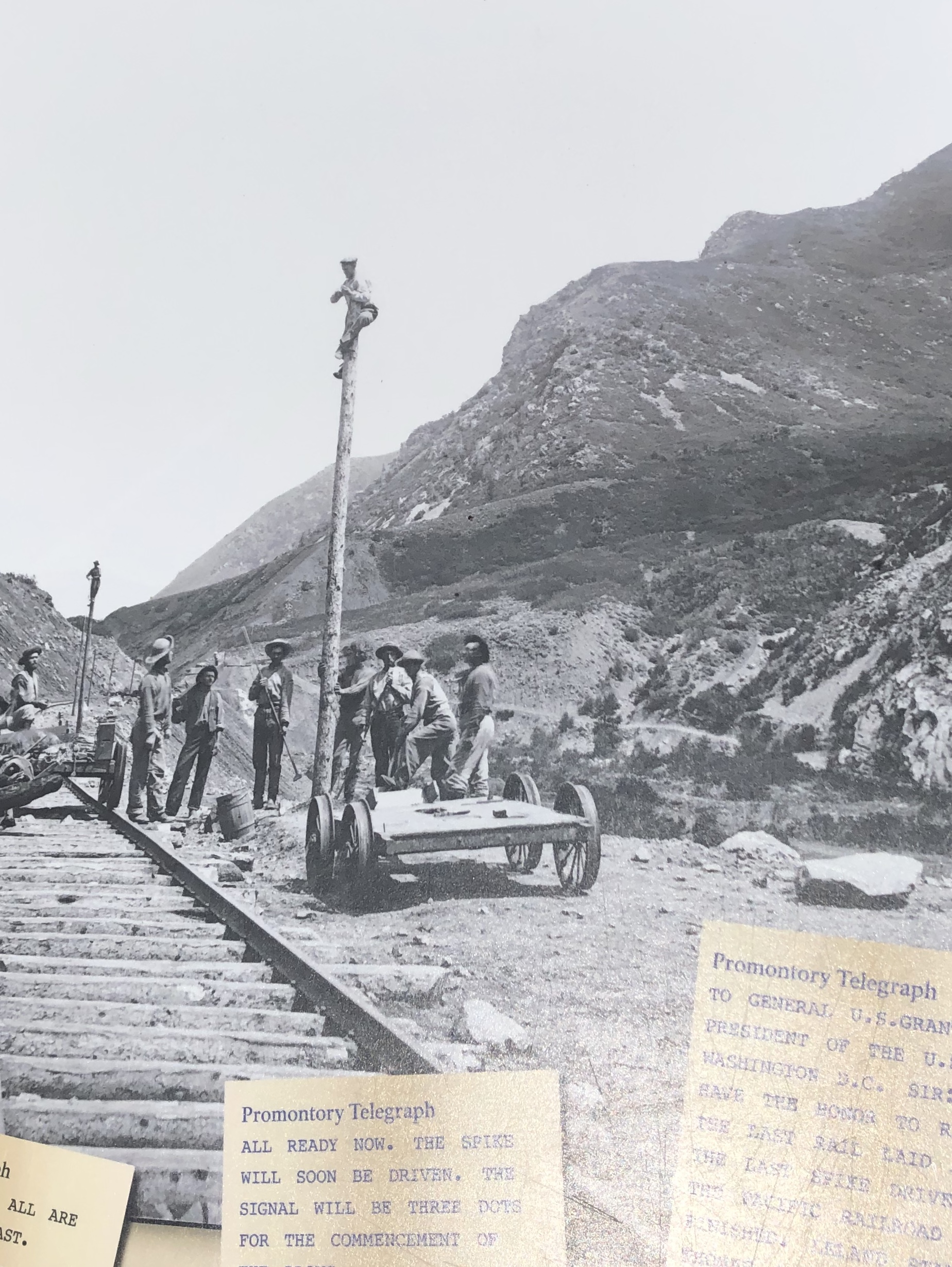 Historical site building and to the right a telegraph pole. 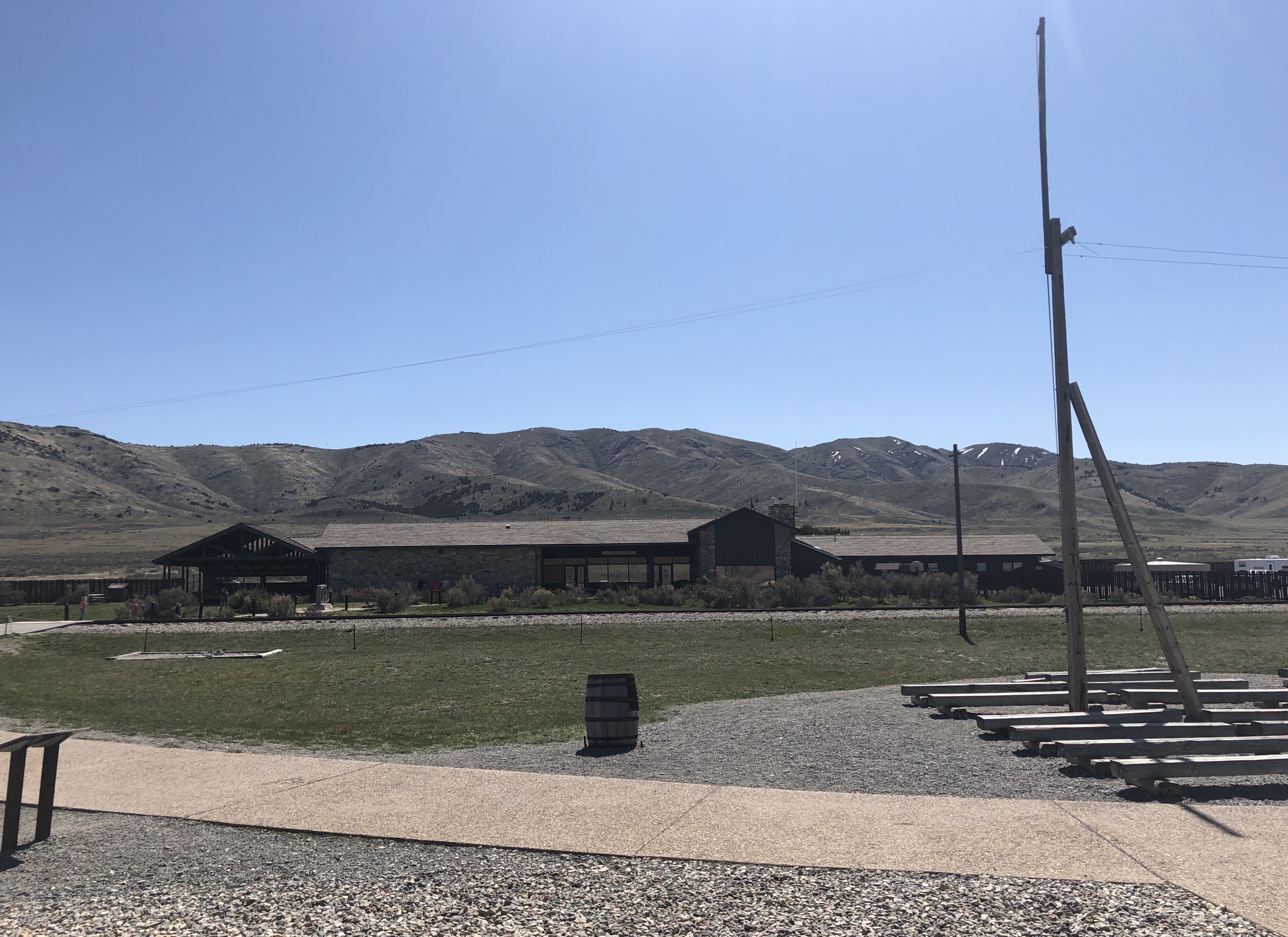 Plaque made to thank all the Irish who worked on the transcontinental railroad. 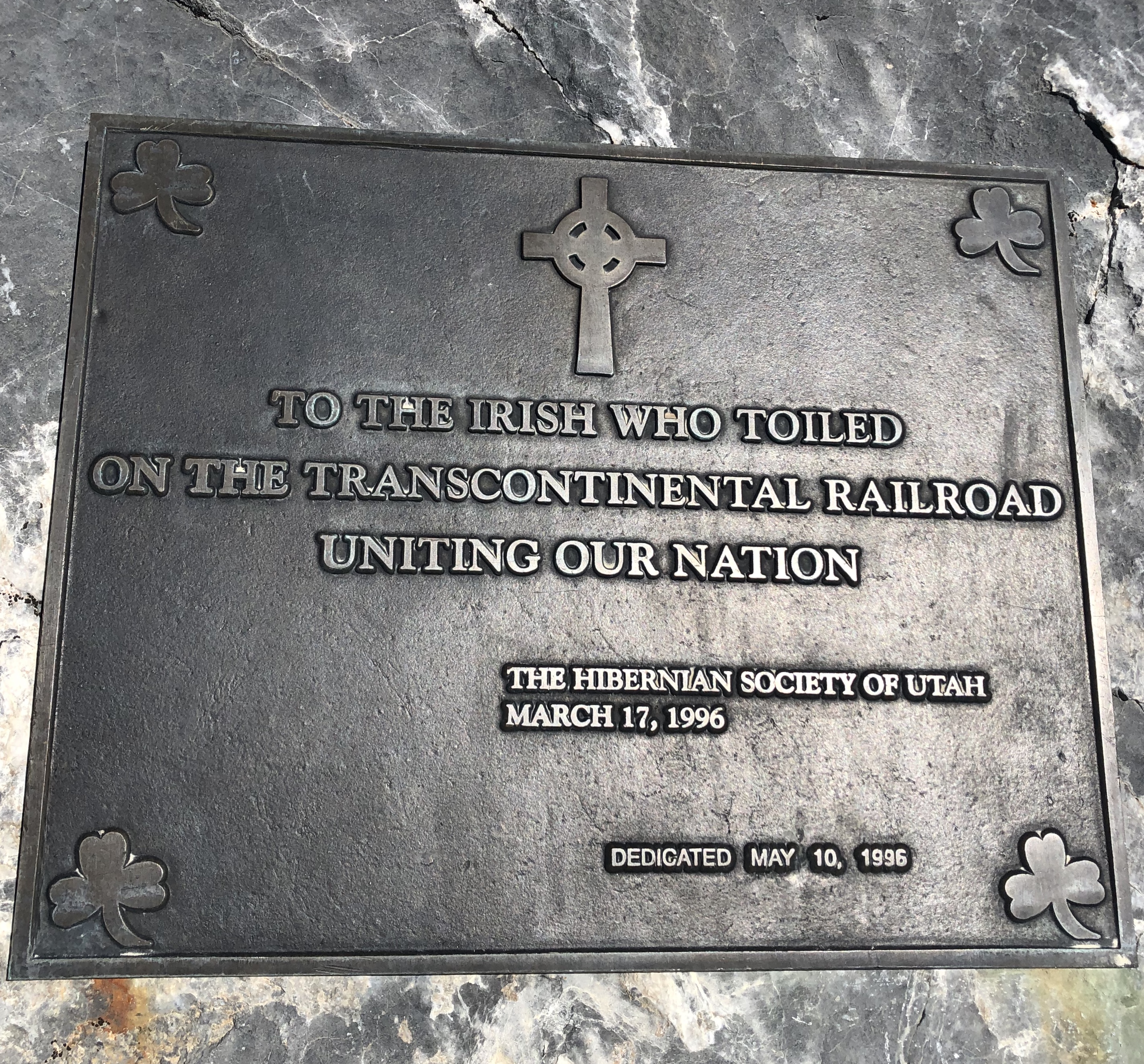 plaque to commemorate all the Chinese workers. 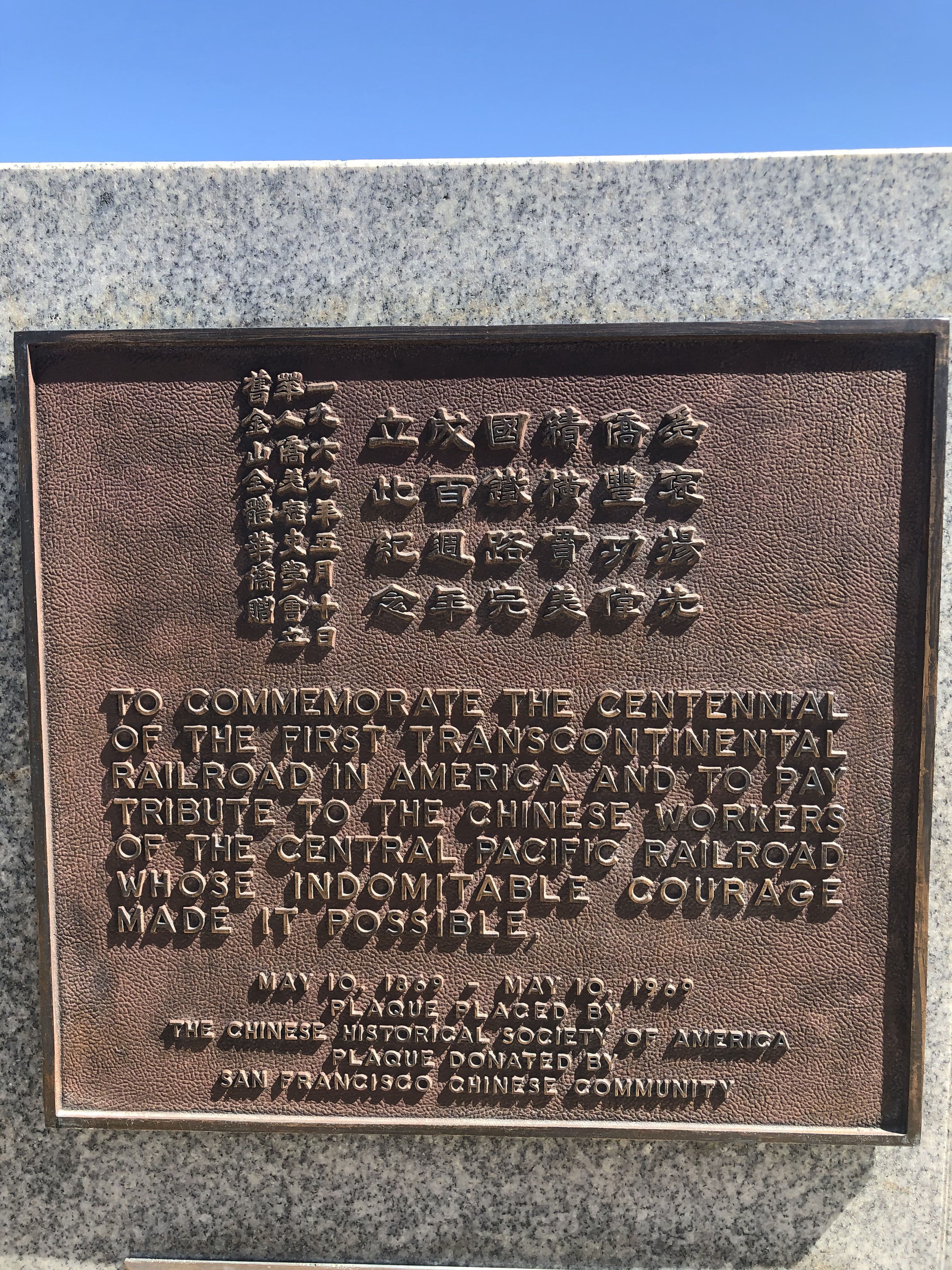 Building the transcontinental railroad was no easy task. It took many laborers and remarkably hard work and dedication. The engineering challenges were enormous. But the project also revealed significant economic problems for rail companies and the nation.

Two of America’s biggest corporations, the Union Pacific and the Central Pacific railroad firms, oversaw the project. Many in the workforce for Central Pacific consisted of Chinese laborers and Irish working men for the Union Pacific. Historian Stephen Ambrose notes that the labor force, “at its peak approached the size of the civil war armies, with as many as fifteen thousand on each line.” (Stephen E. Ambrose. 2000. p18). The businessmen who guided this work included Thomas “Doc” Durant, Oaks Ames, and Oliver Ames from the Central Pacific and the Union Pacific’s Leland Sandford, Collins Huntington, Charles Crocks, and mark Hopkins. James Harvey Strawbridge served as head of construction. Theodore Judah was chief engineer for the project, responsible for determining the best route for the railroad through the Sierra Nevada mountains. Convinced that a railroad could be built from San Francisco Bay all the way to Council Bluffs, Iowa, he gained support from politicians in California and Washington in order to make the project happen. In Ambrose’s view, “it was Judah above all others who saw the line could be built but only with government aid, since only the government had the resources to pay for it.”

Two Railroad companies confronted many obstacles in the transcontinental project. The Central Pacific had a hard time keeping laborers because of the very difficult working conditions. Company executive Charles Crocks had no other choice but to start hiring Chinese immigrants. Even with a larger labor force, the harsh winters in the Sierra Nevada made it extremely difficult for laborers to maintain steady progress. The Union Pacific also had obstacles along the way, especially with battles against Native American tribes who, as a History.com website argues, felt “threatened by the progress of the white man and his iron horse across their native lands.” For every mile of track, they build they would receive 48,000 in government bonds and 6,400 acres of land which later double to 12,800. They had to be efficient and fast. In May 10th, 1869, they finally reached their meeting point at Promontory Summit, the final spike was driven connecting the lines. What had taken months of travel from east to west was now possible in a matter of weeks. It was a historic moment for the nation and one of its greatest engineering accomplishments.

The golden spike ceremony is known as the day when four golden spikes were driven to complete the union of the country with a transcontinental rail line. There were in fact other items produced to mark the occasion. Both individuals and businessman were involved in the creation of this items. Two golden spikes were created, one by a contractor named David Hewes and the other one by a newspaper man by the name of Frederick Marriot. Nevada’s silver spike was a donation from a railroad commissioner and Arizona’s Gold and silver spike from territorial governor Anson Safford. The special hammer made for this event, as noted by nps.gov “was heavily plated with silver and stamped with the manufactures name.” Lastly a laurel wood tie with drilled holes was made for the spikes that would complete the transcontinental railroad.

As much as the transcontinental railroad was a technical success, one might think that every other railroad constructed had the same outcome. But that wasn’t the case. The majority of people responsible for the construction of this railroads were wealthy men who get the most profit out of big railroad constructions. Big corporations did take a lead in engineering innovations, but, as historian Richard White argues, the cost was not worth it. Railroads were built ahead of demand and at time when the country was not economically stable. It would have been wiser to make greater investments in different areas of the economy. White argues that the costly transcontinental projects only added to the great depressions of the 1870’s and 1890’s. Markets were flooded with wheat, silver, cattle, and coal that far exceeded demand. The railroad companies, White argues, “often squandered large amounts of capital and labor for no good end.” American society would end up paying the consequences of the costly railroad projects.