Built in 1930, the Sugar House Monument is a 42-foot obelisk that celebrated the sugar beet industry and remains a centerpiece of the Sugar House neighborhood within Salt Lake. The city received a grant to restore and preserve the monument in 2003; this funding has allowed for the light at the top of the monument to illuminate the neighborhood as it once did in the city's early years.

Close up of the carving at the top of the monument.

Full shot of the entire memorial. 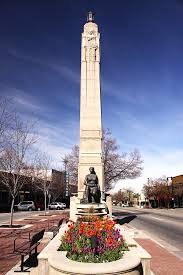 In August 2014, construction began on the Sugar House Monument Plaza. The plaza and its monument have long been considered the center of the Sugar House Business District. Once complete, the $2.5 million renovation will feature nearly an acre of public open space, reactivation of the historic monument’s fountain, installation of a new interactive water feature, outdoor dining, and public art.