Home to the legendary Tulsa Spotlighters, this art deco showplace has entertained Tulsans for decades. 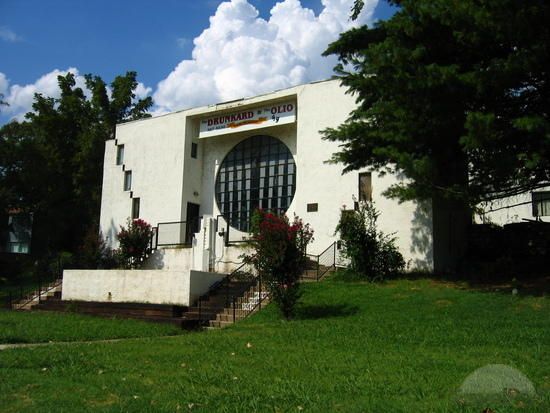 Musician and conservatory instructor Patti Adams Shriner had trained in the U.S. and Europe but wished to make a permanent residence for her art in Tulsa, a place which would be equal parts school and recital hall. Influenced by colleague and fellow artist Adah Robinson--who had designed the Boston Avenue Church--Shriner chose Robinson favorite Bruce Goff as the architect of her studio. The Riverside Studio is very similar in material, layout, and design to the Robinson Studio which Goff had previously built.

Built by Goff in 1929, the Riverside Studio building is a two-story stucco structure which reflects elements of Art Deco and International Style design. Goff’s inspiration for the building was his attempt to create “frozen music,” or capture music in architectural form. The theme is resonant in the window treatment on the building’s façade. The enormous round window is patterned with sand-blasted ornamentation, and is flanked by smaller rectangular windows adjacent to black glass inserts, which form a diagonal pattern. The sand-blasted pattern evokes the musical score which Goff composed while he was working on the design for the Riverside. The colors, shapes, and arrangement of the windows are variously said to be reminiscent of musical scales, the ebony and ivory of piano keys, and the holes punched into the music rolls that are used by player pianos. The fountain, designed by Alphonso Iannelli, employs abstract marble sculpture with pipes that drip water into chromium cups, which are sculpted and sized to produce distinct musical tones as the water drips onto them before falling into the pool below.

As the Great Depression finally rolled into Tulsa, Shriner’s business began to collapse. The studio shuttered in 1933 and was foreclosed upon by various financial institutions. In 1941, Richard Mansfield Dickinson, a mildly successful actor from New York City, purchased the Riverside. He used the building as a residence and opened a speech-drama studio out of the recital hall. In 1953, Dickinson and a group of amateur performers, called the Tulsa Spotlighters, gave their performance of The Drunkard, a one-act condensation of the melodrama Ten Nights in a Barroom. Dickinson had only planned to hold one performance, but the phenomenal outpouring of public interest convinced the Spotlighters to hold a performance each week thereafter, on Saturday nights.

In 1962, the group organized into the Tulsa Spotlighters, Inc., a non-profit charity, which purchased the theater. Two years later, Karl Janssen, who had starred in the original production, took over as director of the show. The current production recreates the melodramatic atmosphere in which Ten Nights in a Beer Hall was performed—beer gardens where patrons participate by loudly cheering the hero and booing the villain. Each night before The Drunkard comes an audience sing-along and the "Olio,” a vaudeville-style variety act featuring singers, dancers, musicians, magicians, comedians, and other acts. During the holiday season, the Spotlighters tour regional hospitals and institutions to entertain the patients with their Olio acts. The Spotlight troupe currently counts over 150 performers.

On June 14, 2001, the Riverside Studio was listed in the National Register of Historic Places under criterion C; its NRIS number is 01000656.