This museum offers a look into the history of Idaho City, once one of the largest cities in Idaho. The museum features artifacts and historic photographs that date as far back as the 1860s. It also offers a unique look into the history of material culture with Kenn Smith's unique bottle collection. Between the exhibits, programming, and its collection of historic documents and archives, the museum tells the story of the city and region.

Visitors to the Boise Basin Museum will learn about the history of Boise and the surrounding from the Gold Rush period through the 1860s. 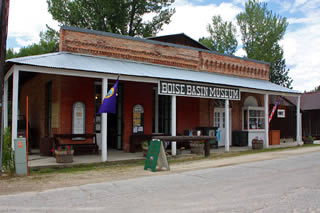 George Grimes was a prospector who reportedly heard an "Indian tale" about a region where there was so much gold, a man could simply reach his hand into the neighboring rivers and streams and pull it out by hand. These tales inspired Grimes to lead an expedition into the hills of Idaho Territory. Here, the men came across a pass, later named Grimes' Pass, where they struck gold. Several days after the discovery, Grimes died. Those first miners established a settlement known as Pioneer City near Elk Creek--just miles from present-day Idaho City. Hoping to keep their find a secret, they spread the rumor that they were chased out of the region giant bears. To this day, that area is known as Bear Run.

These men recorded their first discovery of gold near Centerville on August 2, 1862. Despite their efforts, the news spread quickly and started a gold rush for the Boise Basin. It would be years before roads were built, and nearly thirty years before Idaho would be admitted to the Union. With or without roads, the gold rush brought hundreds of men and thousands of mules to western Idaho Territory. Idaho City began as a camp for these miners, as well as families that had come to Basin hoping to start a new life and a business. Hot summers and cold winters, combined with the primitive and makeshift qualities of the town made it hard to survive during those first years, with many suffering from exposure and shortages of food. Despite these difficulties, the mines provided employment and the community grew to a population of 7,000 people, making Idaho City the largest in the Pacific Northwest in 1864.

As quickly as the mining boom grew, the city and region experienced an even more rapid decline when gold became scarce. By 1867, those who could sell their claims to unsuspecting newcomers.  Idaho City’s population fell below 900 by 1870 and declined to only a few hundred by the early 1900s. The museum is best known for preserving and sharing the story of the city's early boom and bust, but also records the history of the town after the mining boom that once made it famous.