On April 18th, 1878 Hampton University began their Native American Education Program. Hampton, a historically African American University, began the program in an effort to "civilize" Native Americans. The University sought to assimilate Native Americans; they taught English, how to dress, and general etiquette to their student body. Student were required to live with Caucasian families during their time of study. The program did not officially close until 1923.

Native Americans in a class at Hampton University in the 1800s. This photo is courtesy of https://jubiloemancipationcentury.files.wordpress.com/2011/02/sioux-at-hampton-institute.png 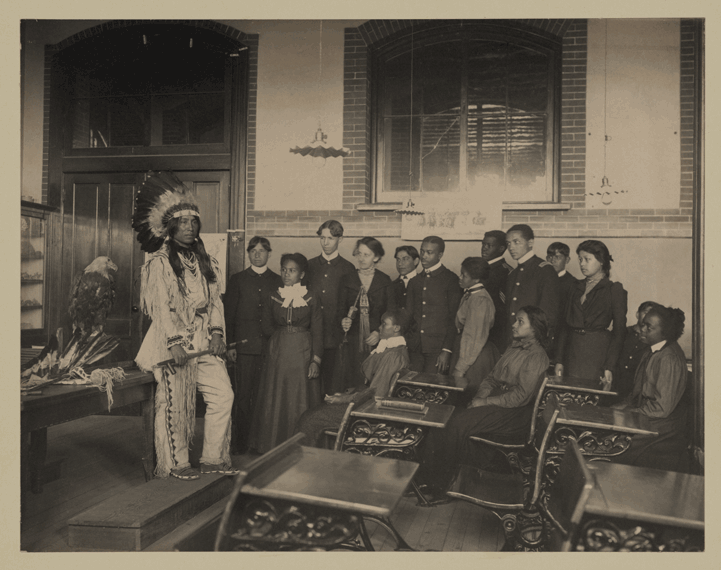 Native Americans have a history of being oppressed in the United States. A lot of tribes had their land taken from them during the expansion period of the U.S and some tribes were taken as prisoners of war in the aftermath. General Samuel C. Armstrong the founder of Hampton Institute, later Hampton University, brought a group of Native Americans that had been imprisoned at Fort Still during the Red River War to enroll at Hampton. Hampton was founded as Hampton Institute, a historically black institute. They became the first class of Hampton’s Native American Education Program on April 18, 1878. There were approximately seventy men and women in that first class.

The Native American Education Program was a part of the new country-wide initiation after the Civil War to “civilize” the Native Americans. Reservation schools were funded by the American government and sometimes Christian missionaries. Hampton was one of the pioneer schools to have this program. The program taught the Native Americans how to speak English, work, and dress like Americans. Armstrong personally believed that it would take several generations before any real progress could be made for the race as a whole. Armstrong's colleague Richard Henry Pratt also started a Native American program with freed Native Americans and named it the Carlisle Indian School.

During this time period, the racial lines drew clearer with Jim Crow Laws, the KKK, and other organizations that prevented the advancement of other races. Many Americans disapproved of Native Americans and African Americans not only receiving an education but receiving an education together. General Armstrong also did not think that mixing the races would fulfill his vision for Hampton and he tried to keep them separate. At other schools like the Carlisle Indian School, the students were required to live with Caucasian families during the school year.

In 1923, Caroline Andrus, the last director of the program resigned. Andrus stated that her reason for leaving was because she could not prevent the inter-mingling among African Americans and Native Americans. More specifically, she could not prevent the romantic gestures or actions between the men and women. The program officially closed after she resigned in 1923. Today, many tribes have their own schools on their resevations. They function not necessarily to assimilate their students with American culture but to preserve their Native American culture.