Named after its first residents Hannah and William Root, the Root House is a historic house museum that depicts middle-class life in Marietta in the 1850s. Operated by Cobb Landmarks & Historical Society, it was built around 1845, making it one of the oldest structures in Marietta. It still has its original, "I-house" floor plan and interior features such as flushboard walls, mantels, and moldings. Period furnishings are also displayed throughout the house hosts. The property also includes a replica cookhouse with an 1850s stove as well as a garden. The house also offers a variety of events throughout the year and is available to rent for weddings and other gatherings. It was added to the National Register of Historic Places in 2014.

Built around 1845, the Root House is one of the oldest buildings in Marietta. 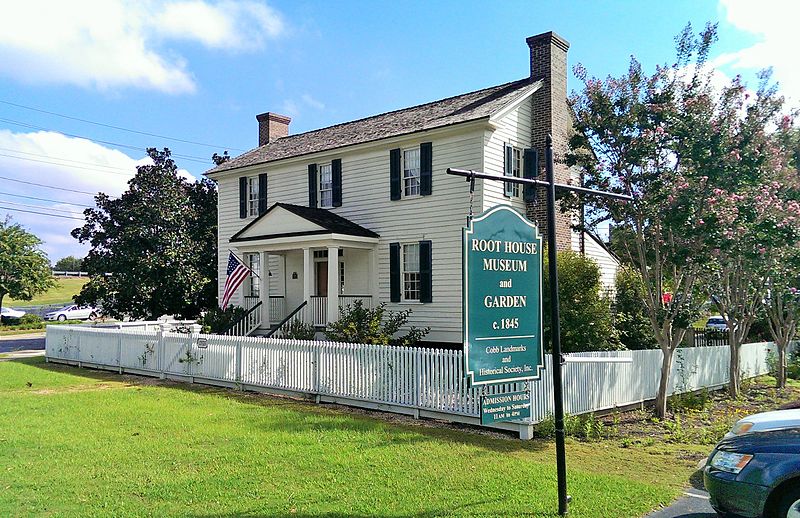 William Root was born in Philadelphia in 1815. Between 1836-1839, he worked in drugstores in Georgia, South Carolina, and Philadelphia. In August 1839, he moved to Marietta and opened a drugstore for his boss, who owned the drugstores he worked at previously. Root married Hannah the next year and together they would have four children. The drugstore became successful and Root bought the store from his boss by 1844. He also purchased the lot on which he would build the house, which was completed sometime within the next year. Root's success garnered him respect within the community and he became a prominent figure, helping organize St. James Episcopal Church and serving as the town's first junior warden.

In 1864, as Union troops approached, the family left Marietta and fled to Washington, Georgia. They returned the next year and found that the house was minimally damaged. Much of the town, on the other hand, was burned to the ground. Nonetheless, Root opened a new drugstore in 1866 and he again became successful. His sons eventually joined him in the business. Hannah passed away in February 1886 and Root sold the house seven months later. It is unclear as to where he lived next but he continued to run the business until his death in 1891.

The house was relocated in 1893 to Lemon Street where it was later divided into apartments in the 1940s. Eventually, the house was in a state of disrepair and almost torn down. Fortunately, the Cobb Cobb Landmarks & Historical Society bought it and moved it to its current location and restored to its 1850s appearance.