The Berkeley Plantation holds over 1,000 acres along the banks of the James River. The Georgian manor that sits on the estate was built by the Harrison family in 1726. The home is currently filled with period furniture and antiques. Also found on the grounds are elaborate gardens and paths available to visitors. Tours are conducted by guides in period costumes to give visitors a better feel for the history of the building and grounds.

The Berkeley Plantation as it looks today 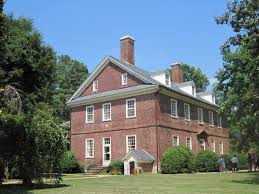 Colonels Albert V. Colburn, Delos B. Sackett and General John Sedgwick in Harrison's Landing, Virginia during the Peninsula Campaign, 1862. They had settled on land belonging to the plantation. 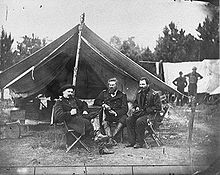 On December 4th 1619, a group of 38 English settlers arrived at Berkeley Hundred. The Berkeley Plantation is located about 20 miles upstream from Jamestown, where the first settle of the Virginia Colony was established in 1607. The Indian Massacre of 1622 where nine settlers at the Berkeley Hundred were killed, along with a third of the entire population of the Virginia Colony settlers were compelled to leave the property. After a few years of abandonment, the location became the home of the Harrison family. The Harrison family was one of the first families of Virginia.

During the Civil War, Union forces occupied the plantation in 1862 and Abraham Lincoln visited twice. The Harrison family was not able to regain possession of their home after the war. It fell into disrepair for many years as it was passed on to a number of various owners before the state of Virginia stepped in.