For at least 6,000 years Native Americans hunted for mussels, crabs, sea urchins, and clams along the coast near Cape Perpetua. Evidence of their lives can still be found in the huge piles of discarded mussel shells that lie along the shore near the Cape Perpetua Visitor Center. Several early explorers sailed past the cape. The first recorded passage was by Bartolomé Ferrelo in 1543; then came Sir Francis Drake in 1575 and Martin d'Aguilar in 1605. The cape was named by Captain James Cook on March 7, 1778 as he searched for the Pacific entrance to a Northwest Passage. Cook named the cape Perpetua because it was sighted on St. Perpetua's Day. In 1933, the Civilian Conservation Corps constructed Cape Perpetua campground, a network of trails, and the West Shelter observation point near the top of the cape. During World War II, the West Shelter observation point was used as a coastal watch station and a large coastal defense gun was temporarily installed. 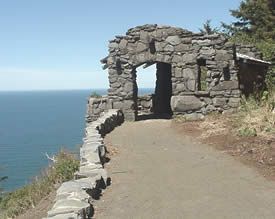