This 1.15 acre cemetery was established in 1866. The original interments were taken from the Stauton city cemetery, Cross Keys, and Port Republic. The cemetery continued to be used until 1993 and contains the remains of soldiers in every conflict from the Civil War to Vietnam. On the grounds is a Second Empire style lodge constructed in 1871 that was designed by Quartermaster General Meigs.

A modern image of Section A of the cemetery 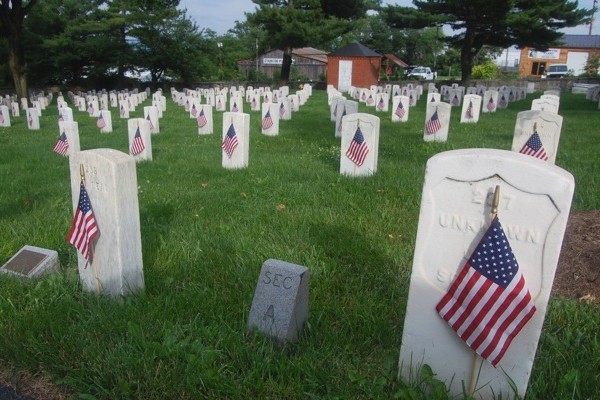 Two years after the Battle of Piedmont, the Stauton National Cemetery was established by the Federal Government. The cemetery was primarily used for interments of Union Soldiers. Of the initial burials, 231 were known soldiers and 518 were unknown. Currently the cemetery holds the remains of over 1,000 soldiers who fought in conflicts from the Civil war until the Vietnam War.

One notable soldier buried at Stauton National is Nicolae Dunca. A native of Transylvania, Dunca enlisted in the Union Army in March of 1862. He was quickly appointed the captain of the 12th Infantry Regiment based out of New York. Dunca was killed during the Battle of Cross keys. His remains were transferred to the Stauton National Cemetery and his marker can be found at Station B, 292.

The lodge, designed by Quartermaster General Meigs, was built in 1871. It is a Second Empire style L shaped building built of stone. This lodge contains a main living area and bedroom. A 1930s addition made of brick can be easily distinguished on the building. This addition included a kitchen and a utility room. Meigs continues to be known for his antebellum architectural achievements.

Open daily from dawn to dusk