One of the state’s most iconic sports landmarks, West Virginia University’s Milan Puskar Stadium has been the home team location of the University’s “Mountaineers” football team since its construction nearly a century ago. Though the original stadium, which could accommodate 35,000 spectators, was demolished in 1979, its modernized replacement was built three miles away and now hosts crowds of up to 60,000. Its largest crowd, topping 70,000, occurred in 1993 when WVU won its first Big East Conference against the University of Miami (Florida).The facility received upgrades and was renamed Milan Puskar Stadium in 2004.

A recent view of Milan Puskar Stadium, whose yellow-and-gold clad fans regularly pack the stands with up to 60,000 spectators. 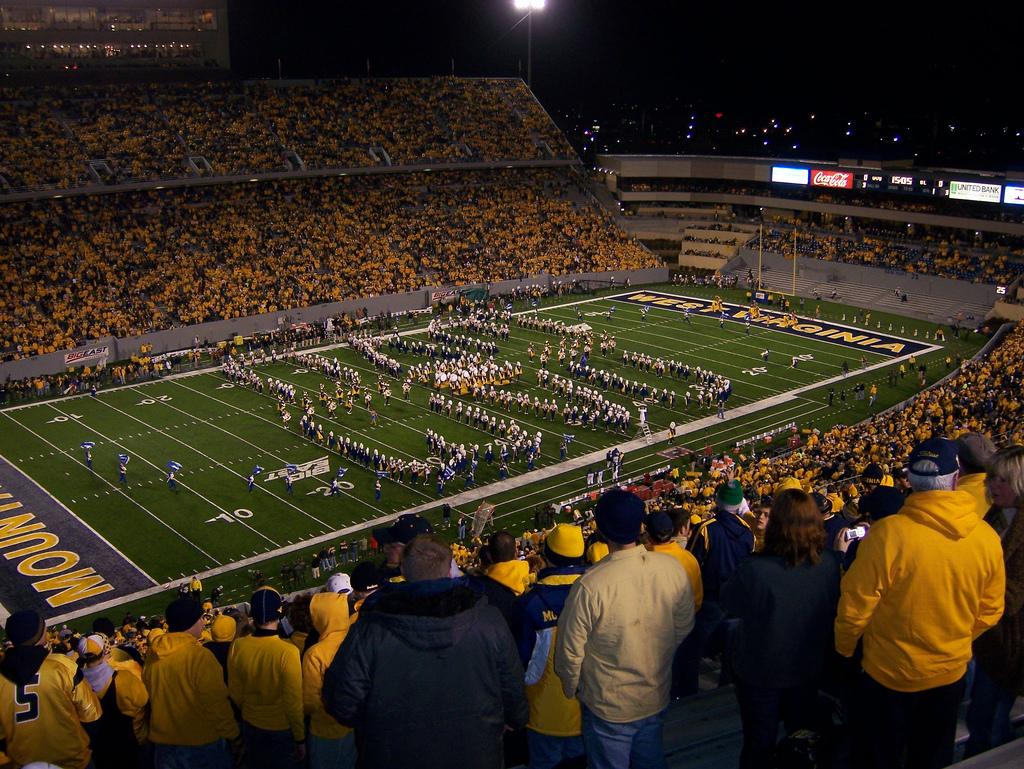 An early "aerial" view of the original Mountaineer Field from the 1930s or 1940s in one of the ubiquitous Tichnor Brothers postcards of the era. Fans without tickets often watched games from nearby downtown rooftops. 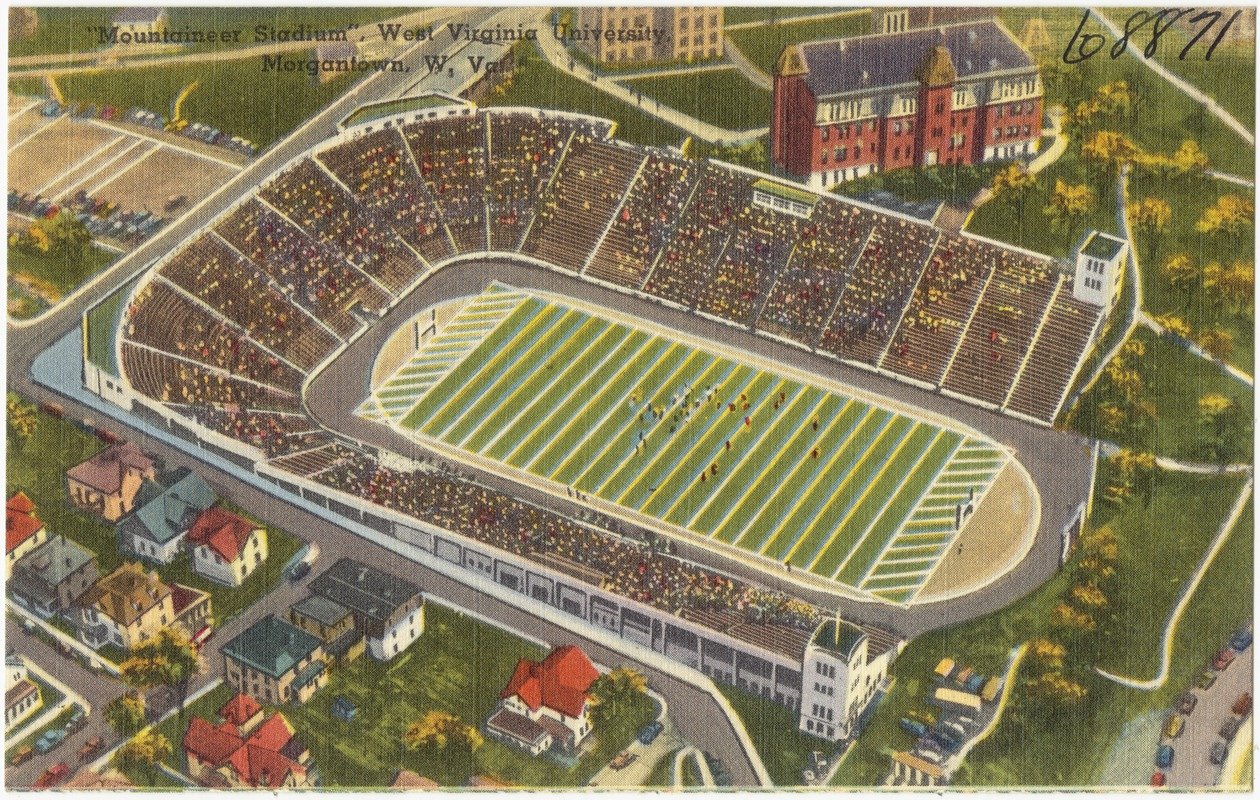 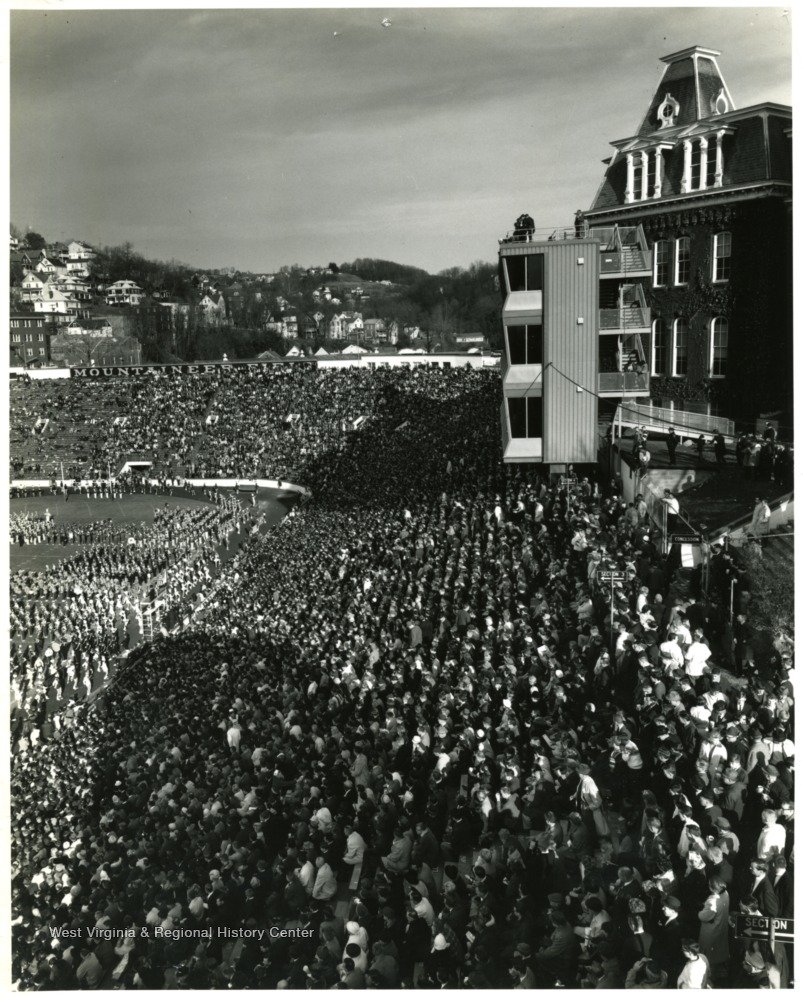 Official Mountaineer mascot Matthew Zervos laments the loss of the original Mountaineer Field in the mid-1980s as the demolition is in progress. West Virginia & Regional History Center. 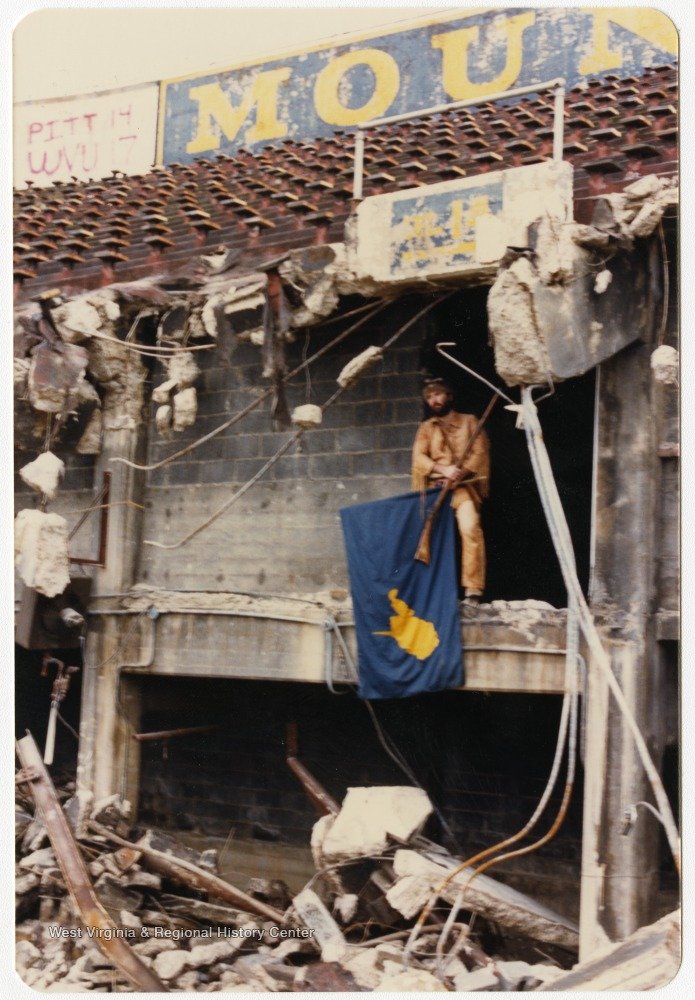 Official Mountaineer mascot Matthew Zervos carries WVU's colors onto the "new" Mountaineer Field, which was then over half a decade old during Zervos's tenure in 1986-1987. West Virginia & Regional History Center. 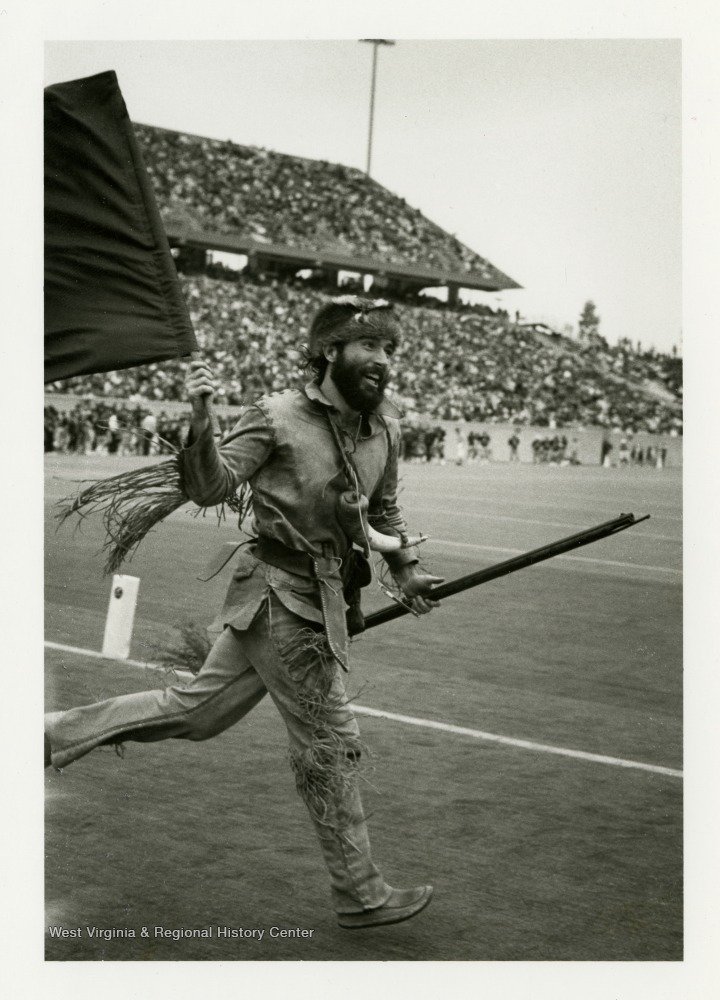 A clipping from the Charleston Daily Mail of November 28, 1924 proclaims the official title of WVU's new stadium, decided by popular vote that autumn. 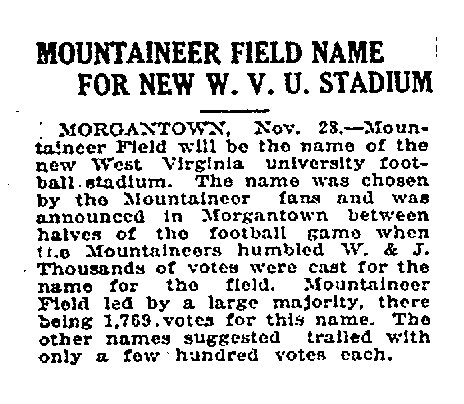 A clipping from the Bluefield Daily Telegraph of August 22, 1984 bemoans the state of the original Mountaineer Field as it awaits demolition. 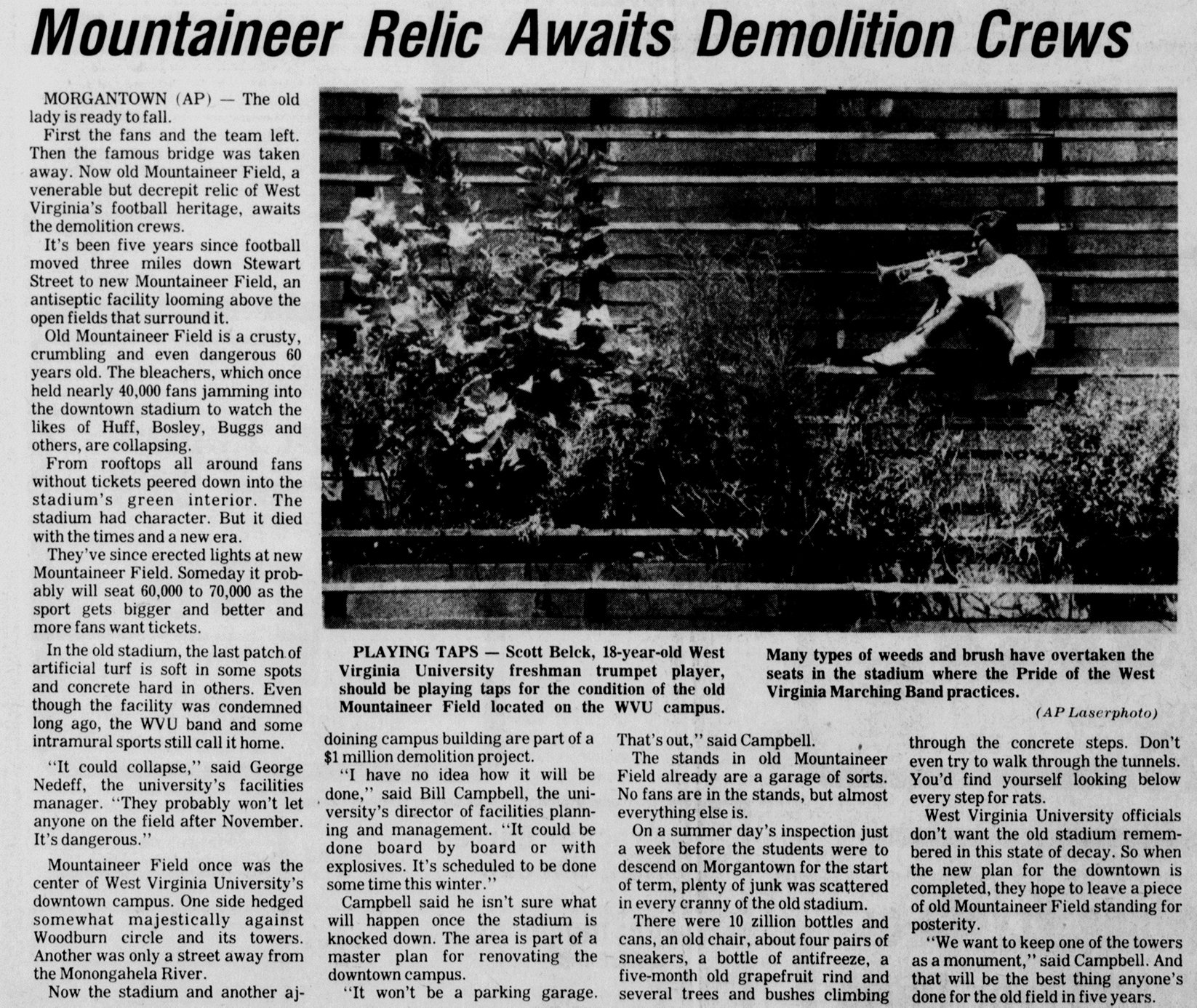 The original Mountaineer Field downtown's last game was held in 1979, but the stadium itself was not demolished until 1987. West Virginia & Regional History Center. 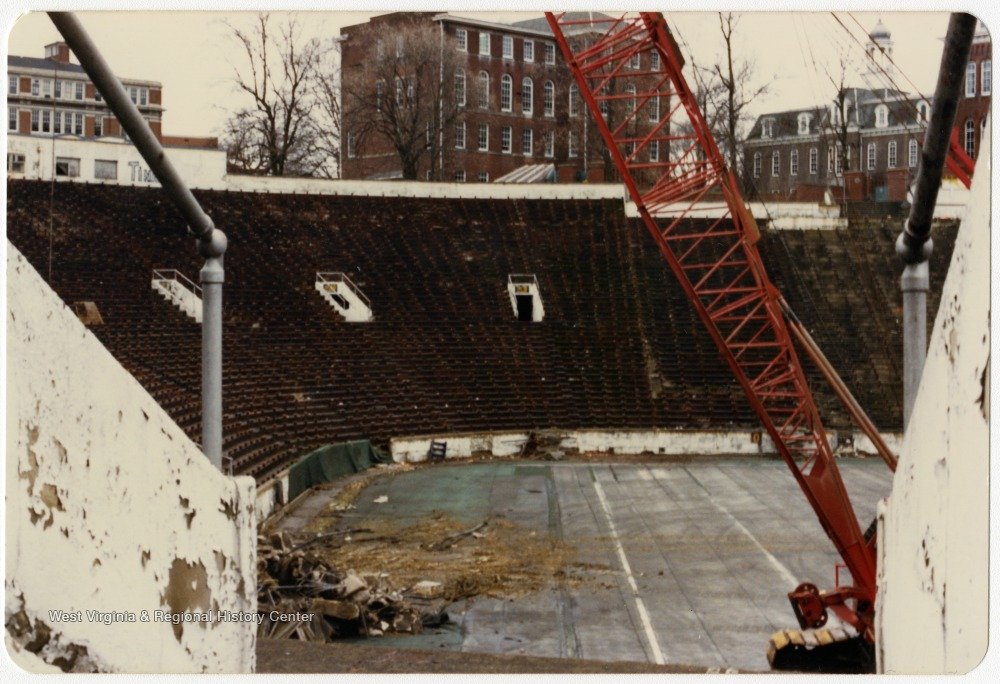 Though West Virginia University (WVU) had existed since the late 1860s and its first football team found humble beginnings in 1891, what was quickly becoming a prestigious school lacked a dedicated football field well into the 20th Century. Construction on a stadium to remedy the problem began in 1924 and was far enough along to host its first game on September 27, 1924, but it was not considered complete until 1925 when the price tag pushed over $600,000. Initial funding, raised through subscriptions and pledges by over 9,000 West Virginia University fans, alumni and other supporters, ran into difficulty when the bank attempted to collect in December 1925. Organizers were left scrambling to collect overdue pledges and the project was in danger of falling through.

Luckily, the Mountaineers and their new field were able to pull through and the iconic stadium, which could seat up to 35,000, went on to host hundreds of games and events for over fifty years. By the 1970s, however, the facility was in need of refurbishment and expansion. West Virginia was struggling to rebrand itself after a period of economic hardship, however, and Governor Jay Rockefeller pushed for a new facility entirely. The original Mountaineer Field at WVU’s downtown campus had little room to grow, so a site for the new 50,000-seater was designated three miles away at the University’s Evansdale campus.

A modern $20 million arena was opened in time for the September 7, 1980 game against Cincinnati, though about $2 million in work still remained on the team’s facilities and the press box was a mere skeleton. In attendance were West Virginia Governor Jay Rockefeller and Senators Robert C. Byrd and Jennings Randolph. Parking at the time only provided for about 2,000 guests and was reserved for season ticket-holders, prompting complaints and introducing severe traffic in Morgantown when games were held. In the meantime, the old Mountaineer Field downtown languished as it awaited demolition until winter of 1984--a process not completed until 1987.

The New Mountaineer Field was expanded within its first decade, boosting its viable seating to 60,000 in time for an overcrowded championship game against the University of Miami in 1993, when the stadium was oversold to 70,000. Though lamented as “antiseptic” by the Bluefield Daily Telegraph when it was first built, the new Mountaineer Field is now as much beloved as its predecessor. In 2004 it was renamed Milan Puskar Stadium after a huge donation by wealthy Morgantown resident and owner of international corporate giant Mylan Pharmaceuticals. The new additions include modernized scoreboards and an indoor training facility that allows WVU’s Mountaineers to practice year-round.

Monday thru Friday 8am to 5pm