A National Historic Landmark, Hopsewee is a historic plantation house built almost 40 years prior to the American Revolutionary War (1776-1783). It is historically significant for being the birthplace of one of the signers of the Declaration of Independence, Thomas Lynch Jr. (1749-1779). He was also a member of the First and Second Provincial Congresses, the Constitutional Committee for South Carolina, and the first State General Assembly. Situated next to the North Santee River, the house was once the centerpiece of one of the largest rice plantations in the South. It is a private residence today but is open for tours. The site also features two original slave cabins.

The Hopsewee Plantation house was built around 1740. It was the home of the youngest signer of the Declaration of Independence, Thomas Lynch Jr. For this reason, the house is a National Historic Landmark.

This historical marker is located at the entrance of the property. 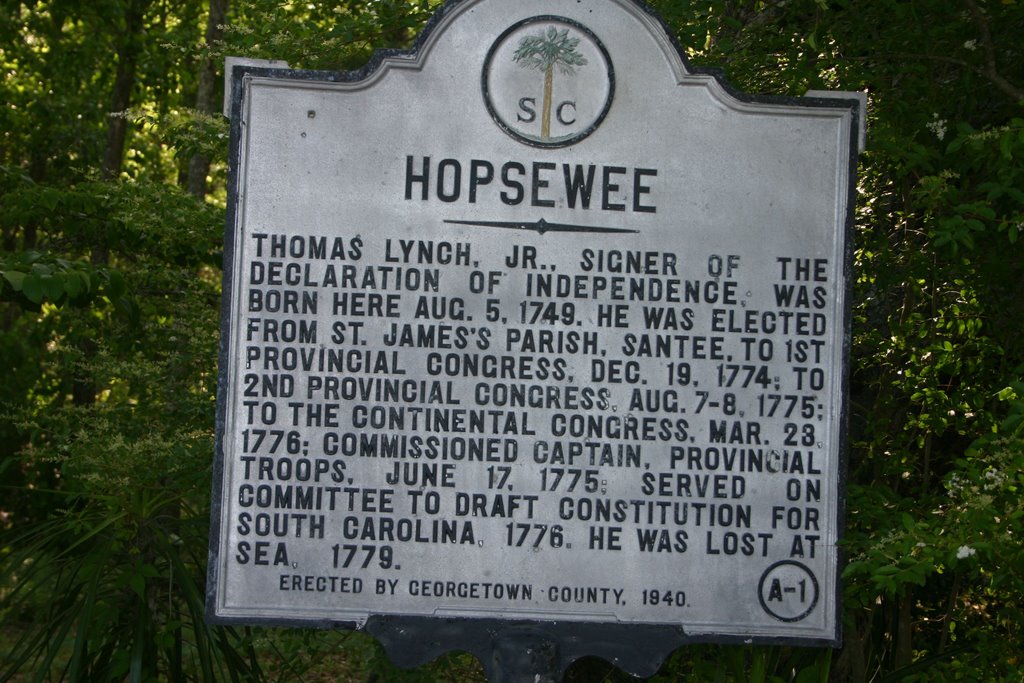 The Hopsewee plantation is estimated to have been built from around 1733 to about 1740. Thomas Lynch Jr. was born August 5, 1749 to Thomas Lynch Sr. and Elizabeth Allston. Thomas Lynch Sr. was an important political figure in politics at the time. He was a delegate at the Second Continental Congress but the South Carolina General Assembly elected Lynch Jr. to be the colony's sixth delegate so that he could take care of his father, who had suffered from a stroke. Lynch Sr. was too sick to sign the Declaration of Independence, but Lynch Jr. did so in his place, becoming the 52nd signer. He was also the youngest.

On their way home, Lynch Sr. passed away in Annapolis, Maryland in December 1776. Lynch Jr.'s health was poor as well after becoming ill in North Carolina. In June 1775 he was appointed a captain in the First South Carolina Regiment and went to North Carolina to recruit men. It was there that he became sick and partially invalid. As a result, he was not able to serve in any public function and never recovered after he returned to South Carolina. He and his wife left for the West Indies in 1779 where they hoped his health would improve. The ship, however, was lost at sea (they did not have children).

Rice fields were the major source income at the plantation up until the Civil War (1861-1865). According to the Hopsewee website, in an 1850 Georgetown census, the plantation had 178 slaves and produced 360,000 pounds of rice. After the war ended and people returned to their homes, rice was no longer cultivated at the plantation. Even though the former slaves were now free, many remained and became tenant farmers. Throughout the years, the Hopsewee Plantation has only been owned by five different families. The Lucas family owned it the longest, almost two hundred years.

The other owner's of the Hopsewee plantation include: the International Paper Company who bought it in 1945; Colonel Reading Wilkinson purchased the house and a few acres in 1947; Mrs. Wilkinson traded houses with Jim and Helen Maynard in 1969; and Frank Beattie obtained the house in 2000. The house was designated a National Landmark in 1971.