Paul "Bear" Bryant remains an iconic figure in American sports history. As head coach of the University of Alabama football team, he led Alabama to six national championships. Bryant began his position as the head coach of the team in 1957. By the end of Bryant's career as the head coach of the Crimson Tide, he had 323 victories along with six national championships. The Bryant Museum preserves and shares the history of each of the university's athletic programs. Of course, the highlight of the museum are exhibits about Alabama's most enduring symbol of athletic prowess, legendary coach Bear Bryant. 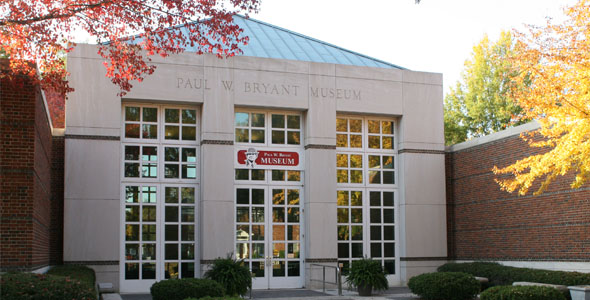 Shortly after starting is coaching career, Bryant promised his players that if they followed his lead, they would win a National Championship in 1961. Alabama not only won the championship in that year, he was awarded the title of National Coach of the Year. Bryant's tenure began a long-standing tradition of championship football at Alabama, as the Crimson Tide also won national championships in 1964, 1965, 1973, 1978, and 1979.
Bear Bryant was also known for adding a new spin to the attire football coaches normally wore while coaching on the sidelines. During that time and event when considering present-day football coaches, if any hat at all, the coaches wear a solid hat representing their team. Bryant wore something a little different. His signature hat was a houndstooth fedora. He was such an iconic part in the University of Alabama's football history, that many fans began wearing houndstooth pattern clothing in recognition of the coach and his impact that he had made on the school.
The Paul W. Bryant Museum showcases not only information on Bryant, but on all of the history of the Crimson Tide football team. They do this through six iconic exhibits. A few of those exhibits are the 'Hall of Honor.' Here, pictures of Bryant and every one of his teams align the hall for visitors to admire the great number of teams that Bryant coached during his time at Alabama. The second exhibit is called, 'The Tide Through Time.' This exhibit showcases information and pictures about every football team the school has had from the beginning in 1892 until the present day. 'Coach Bryant's Office" is the third exhibit the museum has to offer. This is a remade replica of Bryant's office. The museum lets visitors see how it felt for the players to enter the office of the iconic coach.