City of Wayne Historical Museum is housed in an 1878 former Village Hall, located at One Town Square in downtown Wayne. All of the collections in the Wayne Historical Museum are a part of Wayne’s proud history, including the building itself.The collection contains over 3,000 artifacts and most of them are paper-based objects: government records, maps, scrapbooks, photographs, yearbooks, and newspapers. Other artifacts are films, clothing, household items, and accessories. 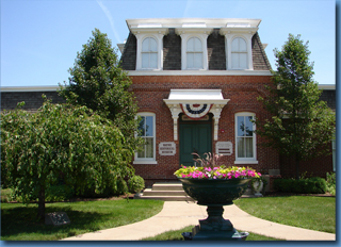 All of the collections in the Wayne Historical Museum are a part of Wayne’s proud history, including the building itself. The community first built the two-story structure in 1878 to serve as the Wayne Village Hall. It had a loose rock foundation, wood floors, and brick walls. Because the community could not afford the money for a cemented foundation, its foundation remained unsteady until an expensive renovation project in the 1980s.

Over the years, multiple additions were included in order to accommodate more functions. In the early 1900s the fire department began operating out of a wing attached to the back of the building, giving the structure a T-shape. The police department also used the building and built the basement, which housed two jail cells, in 1926. As government departments moved to buildings purpose-built for their use, the community used the building for other purposes such asthe local Junior Achievement and Chamber of Commerce Offices.

In 1987, two side wings were added for more space. There are three entrances to the Museum: the main entrance, back entrance, and the loading dock used for larger artifacts and also for wheelchair access. In the current building layout, the first floor of the Village Hall, the fire department addition and the southern wing of the 1987 expansion compose the exhibition space. A total of seven areas make up the exhibition space of the Museum.  The basement added in 1926 is used for general storage, and the second story of the village hallhouses collection storage.

The City of Wayne Historical Museum contains several unique collections. Most important are the government records like death certificates and business charters and the photographic records of the town’s history, an invaluable resource for genealogists, historians of American town development and Michigan history, and citizens of Wayne hoping to better understand their surroundings. A full run of the local newspaper is kept in bound volumes in the attic. The buggy carriages and sled built at Prouty & Glass, a local carriage manufacturer that predated the automotive industry, constitute another unique aspect of the Museum. The furniture and equipment used at the local hotel, drive-in movie theater, police department, fire department, and other institutions form the third highlight of the collection, as they lend a tangibility to the information held in the archives.