A British soldier who was dispatched to the North American colonies, Horatio Gates served with distinction during General Braddock’s attempt to seize Fort Duquesne from the French. Gates was wounded and was unable to serve in the military for a period. In 1772, Horatio Gates resigned his commission in the British Army after not realizing a position in government. He decided to settle, with his wife in Virginia. Gates purchased a farm approximately in Kearneysville, Wv. Gates named his property “Traveller’s Rest”. When the Continental Congress commissioned him as a Brigadier General, Gates left Traveler’s Rest to assume his post in the Northern Department. 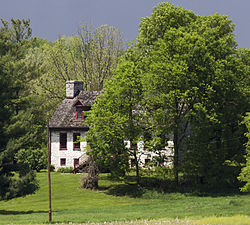 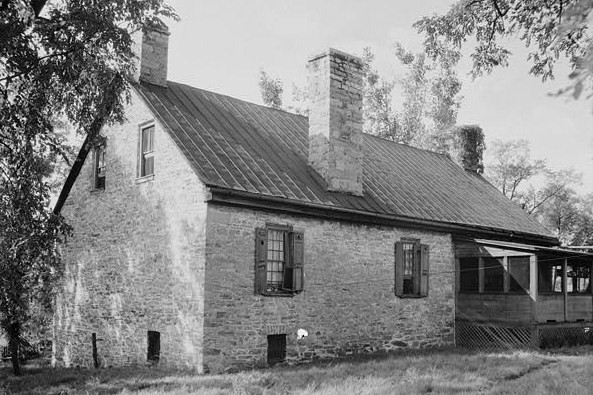 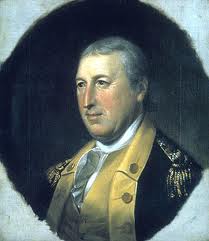 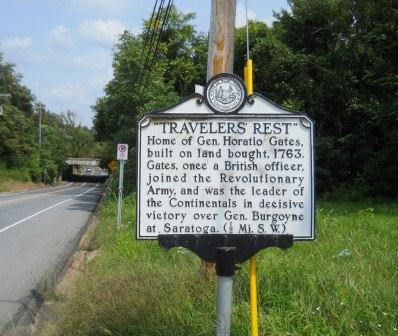 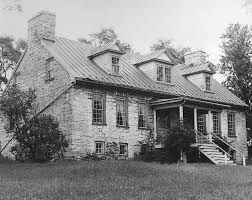 Horatio Gates was born in Essex, England on July 27, 1727. His father was a captain in the British Army. Gates joined the British army while in his early twenties and was sent to North America. He served in Nova Scotia until 1750 as a lieutenant under General Edward Cornwallis. Gates married his wife Elizabeth, the daughter of an army officer in 1754, they had one son named Robert. Gates served with Braddock early in the French and Indian War, and was severely wounded on July 9th in the attempt to capture Fort Duquesne (Pittsburgh, Pa) in 1755. He was later commissioned a major in 1762. On May 8, 1765 he retired with half-pay.

After the war Gates and his family moved back to America from England to a 659-acre farm he had purchased in Kearneysville, which he called Travellers Rest. Gates built Travelers Rest in two stages. The house is constructed of limestone, laid in ashlar style. It has a gable roof that once was covered with wood shingles, but now is covered with metal shingles. At the east end of the house there is a chimney, and a second one in the center of the home. This was the large room where everyone gathered and was lighted by gable windows. The basement was paved with stone and served as the kitchen and the dinning room. The two smaller rooms were at the rear and were used to store food. There used to be stairs that lead to the first floor in the southwest corner of the home. The entrance door, opened into a small stair hall, set against the east (right side) to provide access to the basement and the attic. There were two small bedrooms that were connected and had a fire place in the corner of the two rooms. They were the original bedrooms.

Horatio Gates corresponded with fellow soldier Charles Lee in 1774 regarding the growing political crisis in the colonies. Gates also implored Lee to buy property near his farm, Traveller’s Rest. Lee did settle near Gates and the two kept a close relationship. Lighting was added in the early 1800s. Most of the wrought iron hinges have survived. The original wide board floors are still there. The house has never been restored but is still in fair condition. This home is now a private residence and not open to visitors.

On July 17th, 1775 the Continental Congress commissioned Gates with the rank of Brigadier General. He left Virginia to join the colonial forces around Boston. During the course of the war, Gates was involved in several conflicts with his fellow officers. His clash with General Philip Schuyler over command structure, lead Congress to place Schuyler in command. Gates exonerated himself by later saving Schuyler’s men at Ticonderoga. At the Battle of Saratoga, Gates had a confrontation with Benedict Arnold. Arnold disobeyed orders but his actions contributed a great deal to the colonial victory. In 1778 Gates took the position as President of The Board of War. While in this office, Gates campaign to have Congress dismiss George Washington as Commander. Gates believed that he should replace Washington. Congress did not dismiss Washington. Gates was assigned the command of Southern Army in 1780. He suffered one of the colonial’s worst defeats at Camden, SC in August 16, 1780. Gate’s actions during and after the battle lead to his dismissal.

After the war, Gates returned to Traveller’s Rest. He was a witness to James Rumsey’s successful steamboat demonstration at Shepherdstown on December 3, 1787. Gates sold Traveller’s Rest in 1790 and moved to New York where he later served in the State Legislature for one year. Horatio Gates died on April 10, 1806.