Bear Down Marker in Honor of John “Button” Salmon

The "Bear Down" marker was erected by the Arizona Department of Transportation in 2001. Near this marker on October 3, 1926, University of Arizona quarterback John "Button" Salmon was critically injured in a car accident. The accident occurred as Salmon was returning from a trip to Phoenix with two of his classmates. The young man passed away on the 18th of October. Salmon told his head coach the day before his death the following words about his team: "Tell them...tell the team to bear down." In honor of Salmon, the phrase "Bear Down" became the rallying cry for Wildcat teams and University of Arizona students. 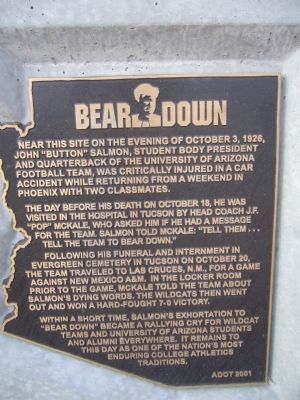 Bear Down Marker Beside of Poston Butte's Marker 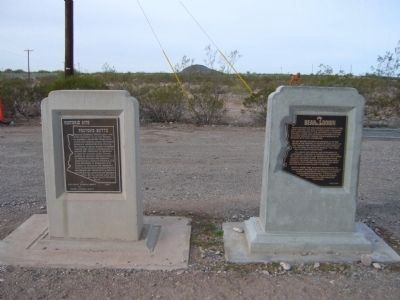 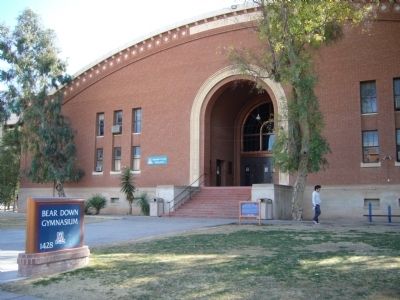 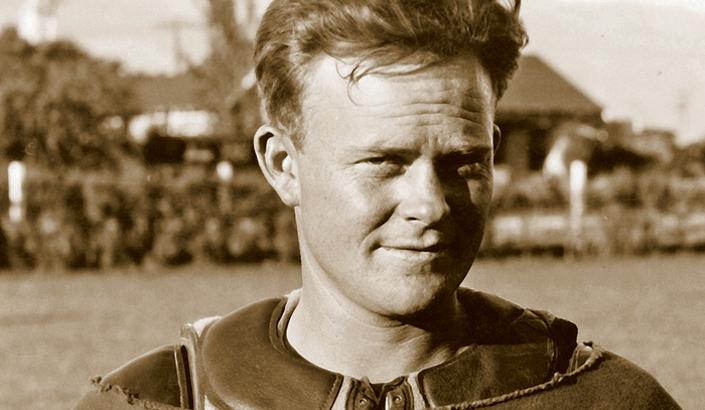 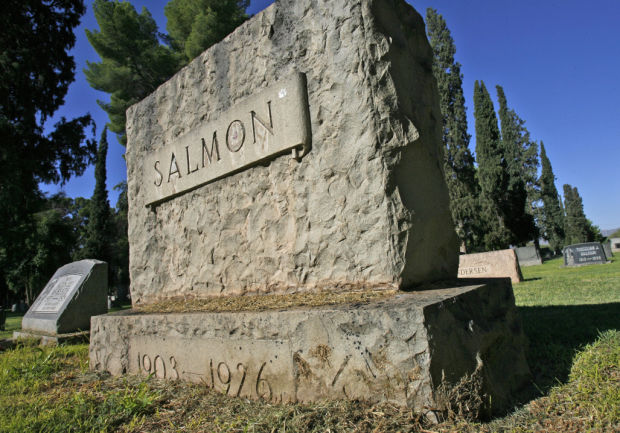 John “Button” Salmon was the quarterback for the University of Arizona in 1926 as well as the student body president.  The “Bear Down” marker, on Arizona Route 79, is near the site of where Salmon and his two classmates were involved in a car accident on the night of October 3rd, 1926.  They were returning from a trip to Phoenix.  Salmon was critically injured in the accident; the injury to his spinal cord caused him to have complete body paralysis. His head coach, J.F. “Pop” McKale, visited Salmon in the hospital on October 17th.  McKale asked Salmon if he had a message for the team. The next day, Salmon passed away.

University of Arizona classes were canceled for the day to honor Salmon’ who was also the student body president. Salmon’s football team had a game on October 20th.  Before the game, Coach McKale told the team the message Salmon had given to him while in the hospital.  The team ended up winning the game against New Mexico A&M with a 7-0 victory.  The team fought hard to win that game and ever since “Bear Down” has been the rallying cry for Wildcat teams and University of Arizona students.

The following year, 1927, a junior honorary organization at the University of Arizona held a dance to raise money to be able to paint the slogan “Bear Down” on top of the university’s gymnasium.  The gymnasium is now known as “Bear Down Gymnasium."