This marker represents the northern limit of a boundary line that was created in 1808. The beginning of the boundary line is at the cut-off in South Clark County. It "follows the watershed between Alabama and Tombigbee Rivers without crossing water". The territory was disputed between the Choctaws and the Creek Indians. Two ballgames, most likely stickball, were played to determine the boundary line. One game was played between the warriors of each tribe and the other game was played between the squaws of each tribe. The Choctaws ended up declaring victory over both games. 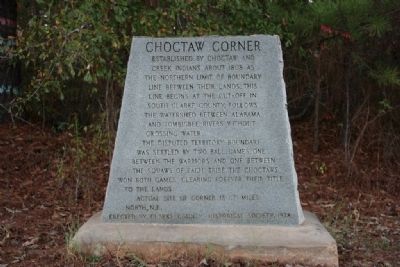 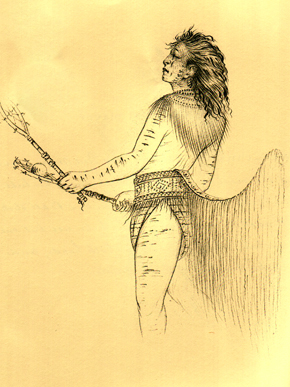 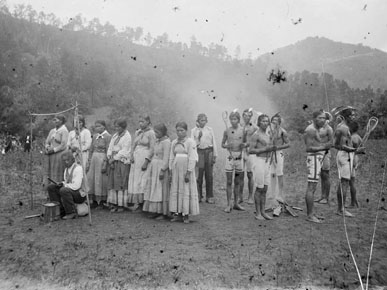 The Choctaw Corner marker was erected in 1978 by the Clarke County Historical Society.  It marks the northern-most boundary line that was created in 1808 by the Choctaw and Creek Indians.  Being that the land was disputed, the Indians decided to play a couple of ballgames to determine the boundary lines.  Most likely they played stickball, a popular game at the time.  The first game was played against the warriors of each tribe and then the second game was played by the squaws of each tribe.  The Choctaw Indians claimed victory over both games and, therefore, setting the boundary lines of the land. 1

A former town in Clarke County, Alabama was named after Choctaw Corner and so had the same name.  In 1888, the town became part of the new town that was nearby, Thomasville.  Thomasville had a new train track running through it so it only made sense to incorporate Choctaw Corner into the town.

Stickball, the game most likely played by the Indians, grew popular with southeastern Indian groups after the sport known as chunkey became less popular.  These games were often violent and chaotic.  They showed bravery of the men much like a battle would have.  “The skills they needed in warfare—strength, speed, endurance, and agility—were also valuable assets for stickball players.”  Stickball was played with two sticks that were made from hickory and were about two to two-and-a-half feet long.  The cups on the sticks were made out of rawhide or woven strips of leather, and the balls themselves were made from stitched hide stuffed with deer hair.  Usually there was some kind of hard object in the center of the ball.  The size of the field that stickball was played on just depended on how many people were playing.  The number of players on each team did not matter just as long as they were evenly matched. 2

There were many rituals performed before a stickball game.  For example, “no one was to eat rabbit because it was thought the rabbit’s tendency to become frightened and run about in a confused manner would be passed on the player.”  And “the most important prohibition was avoiding women whose power it was believed would diminish a man’s martial capabilities.” 2