The Mildred Lane Kemper Art Museum at Washington University in St. Louis is one of the country's leading university art museums. It was established as the St. Louis School and Museum of Fine Arts in 1881, making it one of the oldest teaching museums in the nation. The museum was originally located in downtown St. Louis and is presently located in Washington University's West Campus near beautiful Forest Park. The collection is comprised of 19th, 20th, and 21st-century art, and includes some ancient Greek and Egyptian artifacts and over 100 Old Master paintings. The museum is named after Mildred Lane Kemper, who was a lifelong resident of Kansas City, Missouri, and supporter of the arts.

Mildred Lane Kemper Art Museum was founded in 1881 and has become one of the best university art museums in the country. 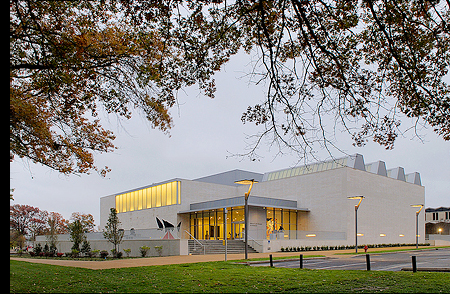 The Museum was initially located in a neo-Renaissance building in downtown St. Louis. In 1906, it moved into the former Palace of Fine Arts Building, which was used for the 1904 World's Fair and is now the home of the St. Louis Art Museum. It remained there until 1960 when a new structure called Steinberg Hall, which was soon called Washington University Gallery of Fine Art. The museum adopted its current name in 2004 and moved into the present building in 2006. It was designed by renowned architect Fumihiko Maki.