When it opened its doors in 1935, the San Francisco Museum of Modern Art (SFMOMA) was the first museum on the West Coast devoted solely to twentieth-century art. The museum is dedicated to making the art of our time a vital and meaningful part of public life. The museum’s exhibitions are beyond the traditional media of painting and sculpture, and include photography, architecture, and design exhibitions. The current collection includes over 29,000 works of art. From the outset, the museum has championed the most innovative and challenging art of its time, and continues to exhibit and collect work by both modern masters and younger, less-established artists. SFMOMA’s collection is distinguished by the major works of Clyfford Still, Robert Rauschenberg, Marcel Duchamp, Philip Guston, Alfred Stieglitz, Ansel Adams, Edward Weston, Henri Matisse, Paul Klee, and artists from Mexico, Southern California, and the San Francisco Bay area. In addition to its museum exhibitions, SFMOMA offers many educational activities, public programs, and runs a research library with more than 40,000 cataloged items.

The San Francisco Museum of Modern Art opened in 1935, becoming the first museum on the West Coast devoted solely to modern art. 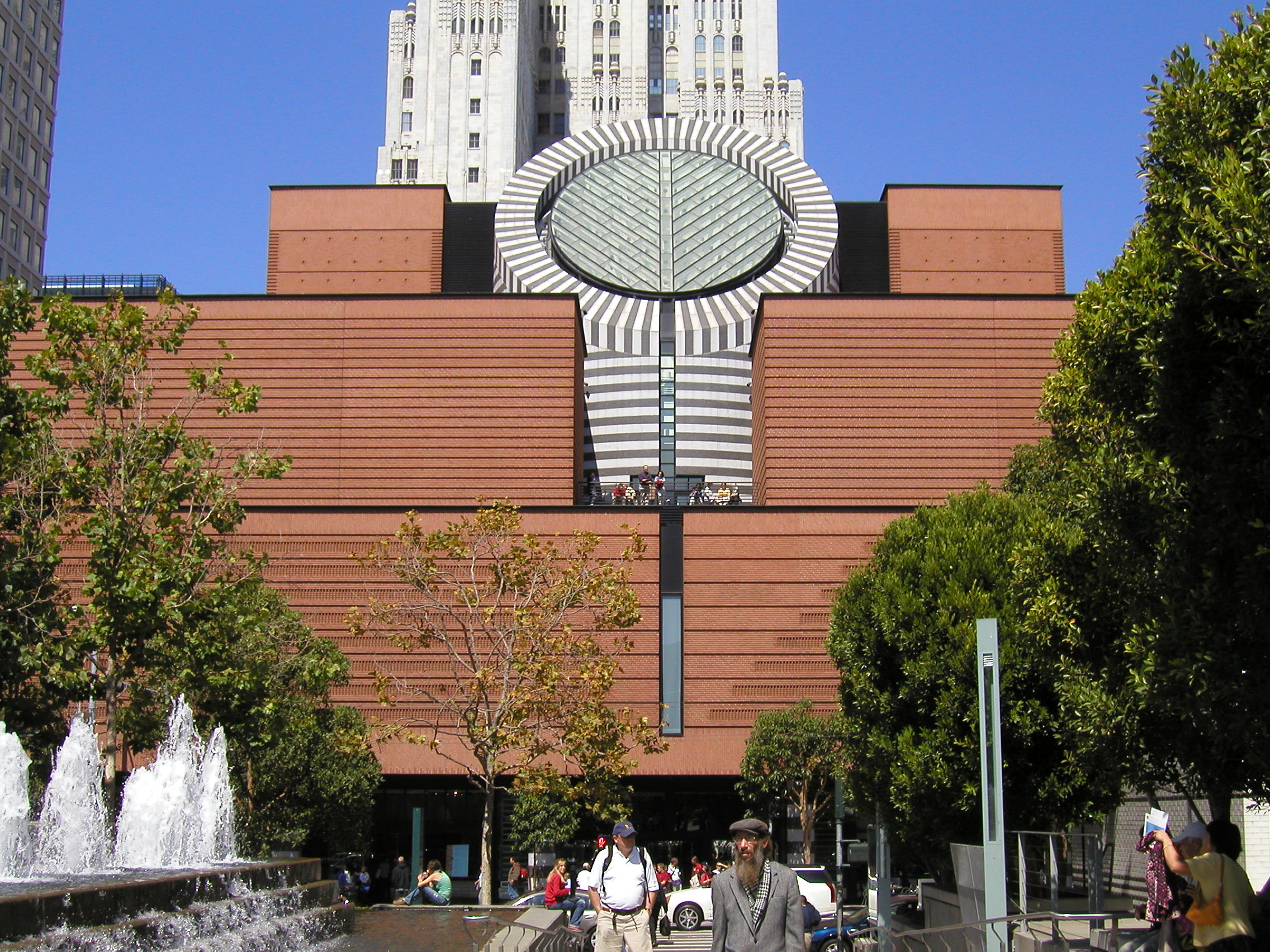 The atrium features a large skylight. 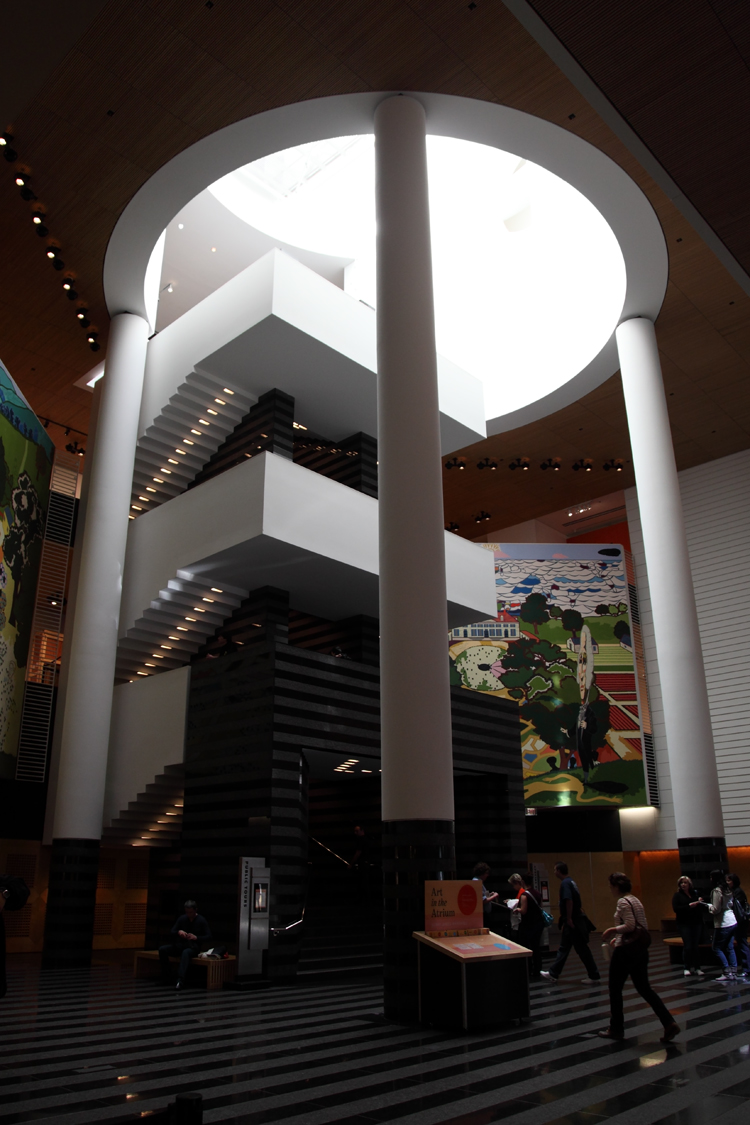 The history of the San Francisco Museum of Modern Art (SFMOMA) dates back to 1871 and the founding of the San Francisco Art Association (SFAA), a group of artists and art enthusiasts who were interested in promoting and encouraging art in the Bay Area. In 1874, the SFAA founded the California School of Design (later renamed the Mark Hopkins Institute of Arts in 1893, the San Francisco Institute of Art in 1907, the California School of Fine Arts in 1916, and finally the San Francisco Art Institute in 1961) and began to host annual juried painting and sculpture shows in 1890. The success of the fine arts department of the 1915 Panama-Pacific International Exposition (PPIE) motivated the SFAA to continuously exhibit art after the close of the fair by taking over its Palace of Fine Arts building, founding what would become the San Francisco Museum of Art (SFMA) in 1916. In 1916, the SFMA was the only San Francisco museum dedicated to exhibiting art, attracting over 200,000 visitors in its first fifteen months.

The SFMA was legally incorporated in 1921, but still retained its connections to the SFAA. Never intended as a permanent building, the Palace of Fine Arts became too unstable by 1925 to use as exhibit space for the SFMA, and the Museum closed its doors. Various fundraising efforts aimed at constructing a permanent museum building eventually resulted in teaming with veterans’ organizations and a 1927 municipal bond proposal. The passing of the bond enabled funding for the War Memorial complex in San Francisco’s Civic Center, consisting of two buildings and a courtyard between them. One of the buildings housed the Opera House and the second building, named the Veteran’s Building, housed offices and meeting spaces for veterans’ organizations, a small theater, and the Museum. The City owned the buildings, but the SFMA had exclusive rights to the fourth floor of the Veteran’s Building rent-free. The War Memorial complex was completed in 1932 and the SFMA opened its doors on January 18, 1935.

When the San Francisco Museum of Art (SFMA) opened on January 18, 1935, on the fourth floor of the War Memorial Building, two other San Francisco museums were also exhibiting art: the M. H. de Young Museum and the California Palace of the Legion of Honor. In order to distinguish itself from these other local museums, the SFMA concentrated on exhibiting and educating the public about modern art. Grace Morley (director 1935-1958) viewed art as the spiritual record of civilization in tangible form, and strongly believed that contemporary art was a valuable part of daily living. This philosophy led to an emphasis in the museum’s exhibitions on art beyond the traditional media of painting and sculpture, including photography, architecture, and design exhibitions. It also led to the development of the rental gallery exhibitions, which were intended to encourage collectors to buy local art by first letting them try works out in their homes.

SFMOMA was among the first American art museums to recognize photography as an art form. For more than 75 years, the museum has been engaged in the acquisition, research, presentation, and interpretation of photographs. Consequently, its photography collection—one of the oldest among art museums nationwide—spans the entire history of the medium, from its invention in 1839 to the present day. Photography is the largest collection at SFMOMA, numbering 16,000 objects.

In 1995 SFMOMA relocated to its Mario Botta-designed building on Third Street in the South of Market area of San Francisco. Since then, the museum's collection has more than doubled in size to 29,000 objects, and annual attendance has tripled.

In September 2009, SFMOMA announced a pioneering partnership with Doris and the late Donald Fisher, founders of Gap Inc., for the long-term loan of the Fisher Collection, one of the world's most important private collections of contemporary art, and an expansion that will create an additional 100,000 square feet of gallery and public space. The SFMOMA building, designed by Swiss architect Mario Botta was closed temporarily in June 2013 for an expansion project.  Designed by architecture firm Snøhetta and scheduled to open in early 2016, the expansion will more than double the museum’s gallery spaces and provide almost six times as much public space as the current building. By enhancing SFMOMA’s programs and collections and bringing the Fisher Collection into public view, SFMOMA will expand as a museum for learning, inspiration, and interaction for residents of the Bay Area and beyond.