During the War of 1812, this limestone cave was mined by as many as sixty men and served as an important source of saltpeter for United States military forces. Saltpetre was used to make gunpowder and owing to the effectiveness of the British blockade of American ports, the new nation depended upon domestic supplies. Many of the men who worked at the cave at this time were African American slaves whose labor enriched their owners. The mine was controlled by the Union in the Civil War and provided a climate-controlled place to billet troops as well as a source of an essential wartime commodity. Local entrepreneurs attempted to operate the cave as a tourist attraction during the early 1980s, and even hosted parties and other events inside the cave. SInce 2006, the cave has been owned and is actively preserved by the Rockcastle Karst Conservancy, an organization dedicated to the preservation of the cave and other natural resources throughout the region.

The cave is normally closed to the public with the exception of open houses that feature tours led by members of the Rockcastle Karst Conservancy. 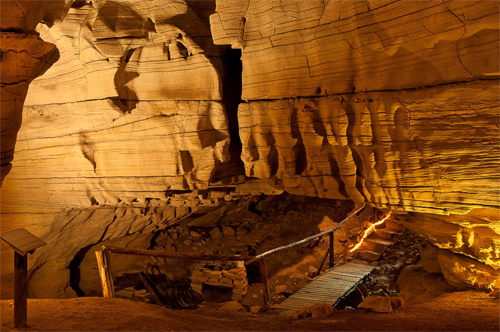