The Chatillon-DeMenil Mansion, built in 1848 in the historic Benton Park neighborhood and one of the few remaining examples of Greek Revival architecture in St. Louis, provides an in-depth glimpse into the lives of two French families. The construction of the house spans two building programs undertaken by families of very different styles of living, yet each reflecting significant aspects of St. Louis' French cultural heritage. The house today serves as a house museum. Although many other houses were built throughout the city in the grand antebellum manner, the DeMenil House is the only remaining Greek Revival house of such monumental proportions in the City of St. Louis. 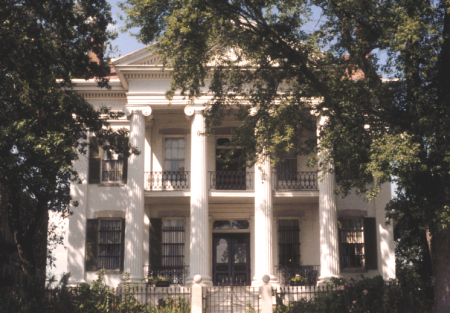 Henri Chatillon, guide and hunter for the American Fur Company of St. Louis, built the first section of the house, a four-room brick farmhouse, in 1849. The house was a simple, two storied brick structure with four rooms.

For some reason, in 1856, Chatillon sold the house to Nicholas DeMenil and his business partner Eugene Miltenberger. Nicholas DeMenil was a wealthy French physician, married with Emilie Sophie Chouteau, who was a descendant of St. Louis’ founding family. In 1861, the DeMenil family hired English architect Henry Pitcher to turn the farmhouse into a Greek Revival Mansion. Work was completed in 1863, at which time the DeMenil family moved into the house. Dr. DeMenil died in 1882 and his only child, Alexander, inherited the entire estate. After Alexander’s death in 1928, the Mansion was maintained by caretakers, Edwin and Jennie Kaiser.

The house remained in the hands of custodians until 1945 when it was sold to Lee Hess, a pharmaceutical manufacturer. An accidental discovery made by Hess gives an added dimension to the house's history.  The area around the house is inter laced with caves. One cave, the Cherokee Cave (which runs into the Minnehaha Cave), has its entrance near to the house. Hess developed a popular tourist attraction, Cherokee Cave Museum, which operated from 1950 to the early 1960s. Planning of the route for the Ozark Expressway, forced the closure of the caves and threatened demolition of the DeMenil house.

Intervention from the newly organized Landmarks Association of St. Louis rescued the house through Union Electric's gift of the $40,000 purchase price. Restoration work began in 1964; formal dedication took place in May, 1965 when the house was turned over to the Chatillon-DeMenil House Foundation, which still owns and runs the house.

Architecturally, the house today largely retains its appearance chiefly from its years of occupation by the DeMenils. In 1966, the American Institute of Interior Designers restored and decorated the rooms. All of the ceiling medallions and marble mantelpieces, as well as the parquet floor and chandelier in the foyer, are original to the house. The furniture and accessories, some of which came from the DeMenil family, are authentic pieces dating from 1830 to 1870. Built of brick, in the Greek Revival style, two-story porch with fluted Ionic columnns supporting a pediment, rise the full height of the building eastern facade. The strength of the porch is carried out through the wall behind it. Doric pilasters divide the wall into sections which correspond to the porch. The Ionic order is also employed in the design of the gallery-type porch on the western facade, but slimmer columnns and the use of a balustrade rather than a pediment give a more informal effect.