The Compton Hill Water Tower was designed by Harvey Harvey Ellis, a designer-draftsman in the employ of architect, George R. Mann in St. Louis. The tower was constructed in 1897-1899 and is preserved as a mid-19th century engineering masterpiece. The tower is centered on the western edge of Reservoir Park, an attractive urban park, in the "Near South Side" of St. Louis City. East of the tower is the roofed-over Compton Hill Reservoir which is still used for water storage. The Water Tower was built to disguise a standpipe in its interior. It was designed as part of the city's public water supply system. The standpipe helped to control the dangerous surges in the city's pipes caused by the reciprocating pumps and maintain an even water pressure. Occasionally, the observation deck at the top of the water tower is opened to the public, allowing visitors to see 360-degree panoramic views of the city. The tower exemplifies the work of Ellis, an inventive designer in the Richardsonian-Romanesque tradition of the late 19th century. It is a robust design in limestone, buff brick, and terra cotta.

Compton Hill Water Tower, one of the seven surviving standpipe water towers in the United States. 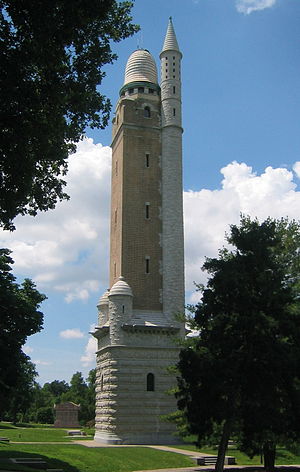 The tower was put into service in August, 1899. The superstructure was completed by November 30, 1899. The Compton Hill Water Tower is important as an architect designed landmark within its neighborhood, in which it has been the tallest constructed element for three-quarters of a century. The tower was removed from service as a standpipe in 1929. Since 1958-1959 the tower has supported the St. Louis Water Division's radio antenna used to dispatch and relay messages to the Division's fleet of service vehicles throughout the city.

The tower exemplifies the work of Ellis, an inventive designer in the Richardsonian-Romanesque tradition of the late 19th century. It is a robust design in limestone, buff brick, and terra cotta composed of three major elements: 1) a stone foundation forming a podium for the shafts, proceeding to a height of 34 feet;  2) two tangential shafts, one square in plan, the second, smaller, and circular in plan, continuing for the next 101 feet in height; 3) the terminus and roof area.

The Compton Hill Water Tower is one of only seven surviving such towers in the United States (two others are also in St. Louis). It was listed on the National Register of Historic Places in 1972. The Compton Hill Water Tower is the latest of the three St. Louis towers. These towers provided an essential function within the city bringing the water supply to their neighborhoods, and thereby improving the attractiveness of the neighborhoods for residential and other development. The standpipes aided in reducing the intensity of the water pressure pulse as it left the reciprocating pumps creating an even-pressured flow of water to consumers. The towers are exceptional structures for having their utilitarian function housed in an architect designed masonry sheath. The combination of engineering and architectural inventiveness gave services to the neighborhood, and a handsome landmark as well.