This iconic stadium celebrated its 80th anniversary in 2010 and appears much as it did when it was constructed with the notable exception of the increased size which now holds up to 80,000 fans and the use of modern technology such as the LED scoreboards that were first added in 1997. As a way to preserve tradition at the university, the school eschewed the trend towards artificial turf in the 1990s and has always maintained a natural grass field as well as a scoreboard that does not include advertisements. The construction of this field was a major upgrade for the Fighting Irish from Carter Field which ultimately expanded the team's reputation thanks to the coach at the time, Knute Rockne. 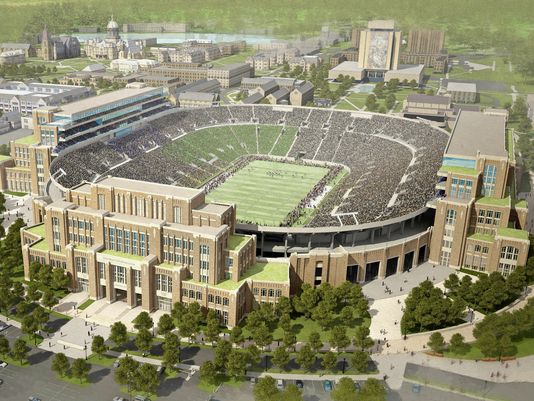 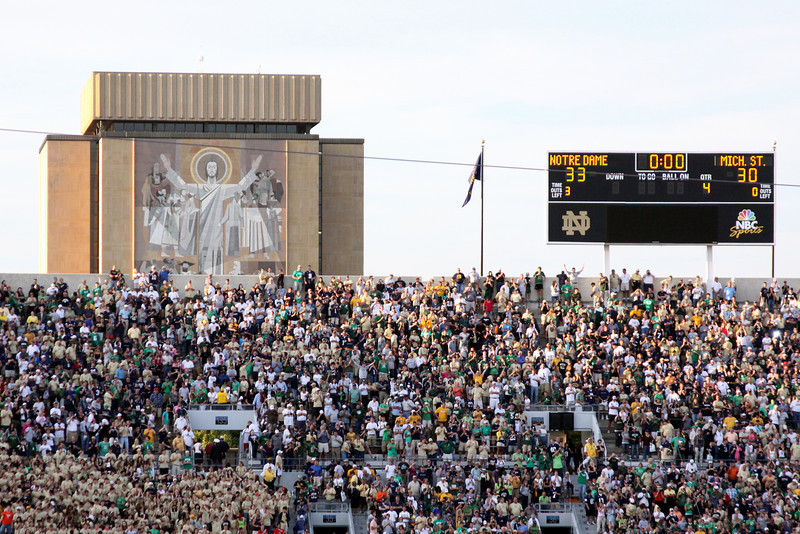 The University of Notre Dame is synonymous with tradition and football. The school was established in 1842 and has long been known for its football program. In 1930, coach Knute Rockne worked to move the team from Cartier Field to a much larger stadium that would rival those of other universities in an era when the largest programs were also building mammoth stadiums. Rockne also worked to develop a team that was worthy of the investment in a new stadium by winning games. Utilizing the same company that brought Comiskey Park and New York's Yankee Stadium and the Polo Grounds to life, Notre Dame built their stadium using the "Big House" at the University of Michigan as a model. When completed, the stadium cost $750,000 and could hold 59,075 fans.

Knute Rockne was only Notre Dame's coach for the first season of the new stadium due to a fatal plane crash in 1931. To honor the late coach, many of the details and practices that Rockne insisted upon were followed in later years. Rockne insisted that they keep the sod from Cartier field and that the surface would only be used for football. Rockne even implemented and supervised the parking system.

In 1997, the university added an additional 21,000 seats bringing the maximum capacity to over 80,000. This project cost over $50 million and included several renovations and new technology such as two new LED scoreboards, a new grass field, permanent lights, and a three-tier press box. Before this renovation, Notre Dame only hosted day games due to the lack of lights. Today, the university still holds only a few night games in accordance with tradition.

"Notre Dame Stadium." UND.COM. N.p., n.d. Web. 16 Feb. 2015. Notre Dame Athletics have historically been nationally known and credited accordingly. This site gives an overview to this history of Notre Dame's widely known stadium and the person who helped make it possible. Notre Dame's Official Athletic Site verified all the information, supplying the reader with credible facts and history. "History." // Notre Dame Stadium // Preserving the Traditions // University of Notre Dame. N.p., n.d. Web. 16 Feb. 2015. This source provides a brief background on the History of Notre Dame's nationally recognized stadium and its history. It is a part of the University's website and ensures credible information in that it is backed by the school itself.

Public Tours: Tour times December through May are as follows: Friday and Saturday, 1:00pm and 3:00pm Please monitor und.com/tours for updates. Current tour prices are as follows: Adult: $15 Youth/Senior (18 and younger/55 and older): $10