Old Yankee Stadium was located here from 1923 to 1973 and replaced by a second stadium at this location which operated from 1976 to 2008. The area where the park was located is now known as Heritage Field and is located just across from the current Yankee Stadium. Affectionately known as "The House That Ruth Built," the original Yankee Stadium was the home field of legendary players such as Babe Ruth and Lou Gehrig while the second stadium saw modern stars such as Derek Jeter. Construction of the original stadium began in 1922 after Yankees owner Jacob Ruppert purchased ten acres of land in the west Bronx from the estate of William Waldorf Astor.

The main entrance to Yankee Stadium during the 1920s. 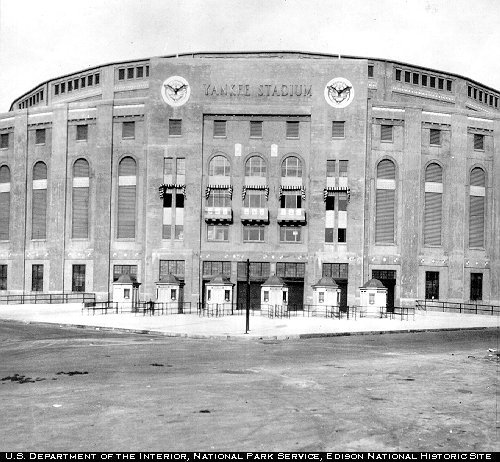 Aerial view of Yankee Stadium as it looked from 1928 - 1936 before night time baseball. 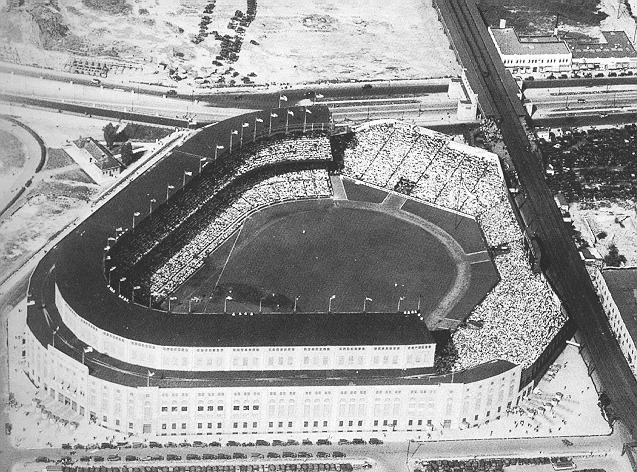 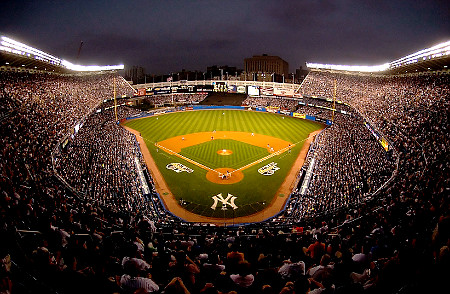 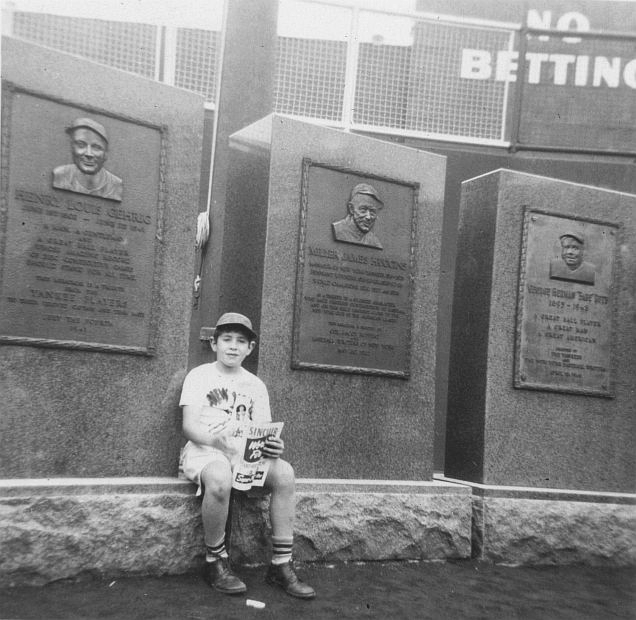 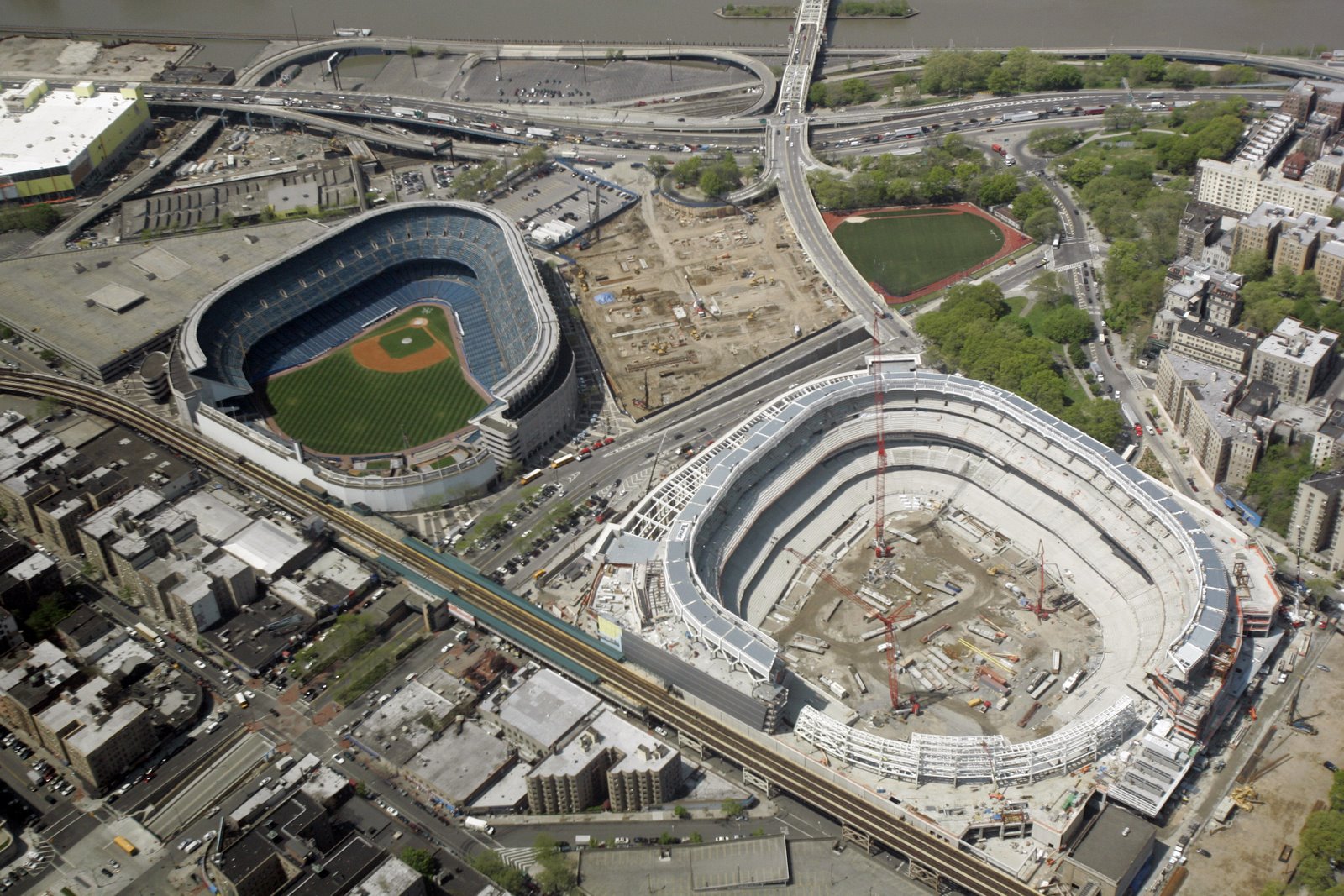 In 1921, one year after purchasing legendary baseball player Babe Ruth from the Boston Red Sox, New York Yankees owner Jacob Ruppert made another big purchase. Unhappy with the current stadium his team shared with the Giants of the National League, Ruppert purchased ten acres of property across the Harlem River for $675,000. Ruppert planned to have the first triple-decked structure in baseball. Construction started in 1922 and was completed in record time for the inaugural game against the Boston Red Sox on April 18, 1923.

Since the stardom and success of Babe Ruth was directly responsible for the success of the team, the stadium became known as "The House That Ruth Built." The Yankees went on to win their first World Series during this inaugural season and throughout the next several decades the Yankees added another 26 Championships and 40 American League Pennants to their record.

During the early years at the old Yankee Stadium, fans sat on wooden bleachers and watched score updates on a wooden scoreboard similar to the system still in use in Boston. By 1937, the wooden bleachers were replaced with concrete but it was not until 1959 that the Yankees unveiled the first electronic scoreboard. Major updates in the winter of 1966-1967 included 90 tons of paint to change the exterior to white and the seats to blue. The next big remodel came in 1972 when the Yankees signed a 30-year lease with the city and rebuilt the stadium in time for the start of the 1976 season. The Yankees played their home games at Shea Stadium while the stadium was almost completely demolished and rebuilt.

During this modernization, structural steel columnns that obstructed the view for fans in the grandstands were removed. The Yankees added the first telescreen of any stadium which allowed fans to enjoy instant replays. The stadium reopened April 15, 1976 with a win against Minnesota and the Yankees went on to win the World Series during that first season in their remodeled park.

The final season at the old Yankee Stadium was played in 2008 after the decision was made to demolish this stadium and build a completely modernized new home for the Yankees. The last game at old Yankee Stadium was played on September 21, 2008 to a crowd of 54,610 people. The last home run was hit by Yankee player Jose Molina which proved historic when referencing Babe Ruth's quote on opening day, "I was glad to have hit the first home run in this park. God only knows who will hit the last."

The last speech given at the old stadium from Yankee captain Derek Jeter was both emotional and inspiring. "For all of us up here, it's a huge honor to put this uniform on every day and come out here and play. And every member of this organization, past and present, has been calling this place home for 85 years. There's a lot of tradition, a lot of history, and a lot of memories. Now the great thing about memories is you're able to pass it along from generation to generation. And although things are going to change next year, we're going to move across the street, there are a few things with the New York Yankees that never change -- it's pride, it's tradition, and most of all, we have the greatest fans in the world. We're relying on you to take the memories from this stadium and add them to the new memories that come to the new Yankee Stadium, and continue to pass them on from generation to generation. On behalf of this entire organization, we want to take this moment to salute you, the greatest fans in the world."

The stadium was home to numerous political rallies, concerts, and other sporting events.  In 1975, this stadium witnessed Pelé play for the New York Cosmos. This calculated move to bring one of the world’s best athletes to the United States brought in spectators from all over and breathed new life into a then faltering sport. After Pelé signed for New York, many other European and South American stars joined NASL teams; the Los Angeles Aztecs signed George Best and Johan Cruyff in 1976 and 1979 respectively. The NASL dissolved in 1984, but the trend of signing national stars continues in the Major League Soccer (MLS) with players like Beckham, Lampard, Henry, Gerrard, Blanco, Giovinco, Bradley, Altidore, and many others coming from larger leagues to build up the MLS in the U.S.

Appel, Marty, Pinstripe Empire: The New York Yankees from Before the Babe to After the Boss, New York: Bloomsbury, 2014.