The Nu'uana Pali Lookout is a pivotal location in Hawaiian history as a passageway through the massive mountains. The location of the pass has been the reason why villages were established in this area. Given the importance of the pass, control of this area has been contested at this and this is the location of one of the bloodiest battles in Hawaiian history. In addition to being a historic site, the view is simply breathtaking. Visitors to the area are advised to bring a jacket as the mountains form a natural wind tunnel.

Overhead shot of the Pali Lookout in 2012. 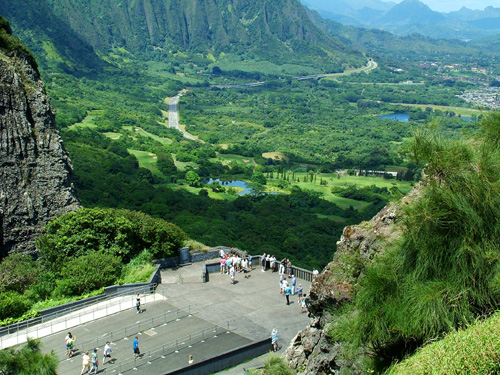 A depiction of the Battle of Nu'uanu. 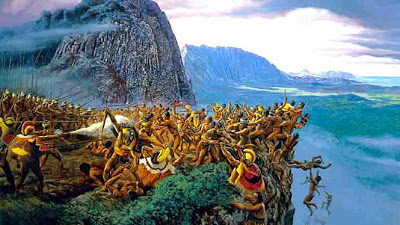 Around the year 1792, Captain William Brown, an English merchant who sold furs and guns, landed in the harbor of Honolulu, O'ahu. Brown sold goods to Cheif Kahekili under the condition that he did not also sell items to the rival Chief Kamehameha from the island of Moloka'i. Brown soon violated this condition and sold weapons and goods to both sides, playing them against each other.

Soon after the death of Cheif Kahekili, civil war broke out between his half-brother Kaʻeokulani and his son Kalanikupule. Kalanikupule ultimately won but emerged from the war greatly weakened. His victory was short lived for there was an argument over payment resulting in the death of five English sailors and the capturing of their two ships. Kalanikupule planned to use these ships to invade his only competition Cheif Kamehameha but the remaining English sailors managed to regain control of their ship and flee.

They went to Moloka'i to explain to Cheif Kamehameha of everything that had happened. This caused Cheif Kamehameha to rally all the tribes in his power to invade O'ahu. Kalanikupule knew of this and prepared for invasion beforehand, arming the cliffs with European cannons. King Kamehameha had been trying to unite the islands; only managing to unite the island of Molokai, but this gave him the perfect opportunity to achieve his dream. He formed the largest army in Hawaiian history and invaded O'ahu with over 300 war canoes.

The Battle of Nuʻuanu began when Kamehameha's forces landed on the southeastern part of Oʻahu. After spending several days scouting Kalanikupule's positions, Kamehameha's army attacked to the west, destroying Kalanikupule's first line of defense. Splitting his army into two, Kamehameha sent one half to flank and the other straight at Kalanikupule. Pressed from both sides, the Oʻahu forces retreated while Kamehameha pursued. During this part of the battle, both Kalanikupule was wounded. With its leadership struggling, the Oʻahu army slowly fell back north through the Nuʻuanu Valley to the cliffs at Nuʻuanu Pali. Caught between the Hawaiian Army and a 1000-foot drop, over 400 Oʻahu warriors either jumped or were pushed over the edge of the Pali. In 1898 construction workers working on the Pali road discovered hundreds of skulls that were believed to be the remains of the warriors that fell to their deaths from the cliff above.