The Poe Museum of Richmond, Virginia has been in operation since 1922 and was made possible by a sixteen-year effort of the Poe Memorial Association. Considered "America's Shakespeare," Poe is best known for his short stories and poetry; and established in 1906, the Poe Memorial Association sought to create a monument to the author. Sixteen years later in 1922, the Poe Museum opened to the public in Richmond’s oldest known home, the circa 1754 Old Stone House. Today, the museum holds the largest and most comprehensive collection of Edgar Allan Poe artifacts, memorabilia, and documents. The Old Stone House was designated a Virginia Landmark on October 16, 1973 and added to the National Register of Historic Places on November 14, 1973. 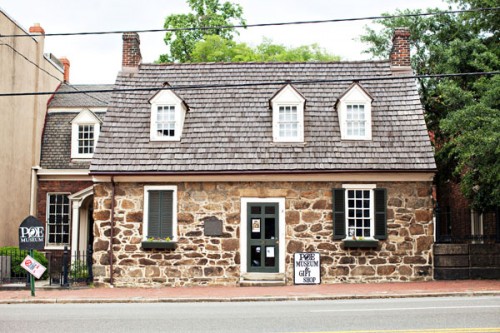 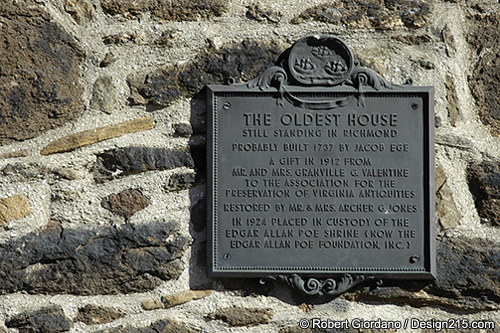 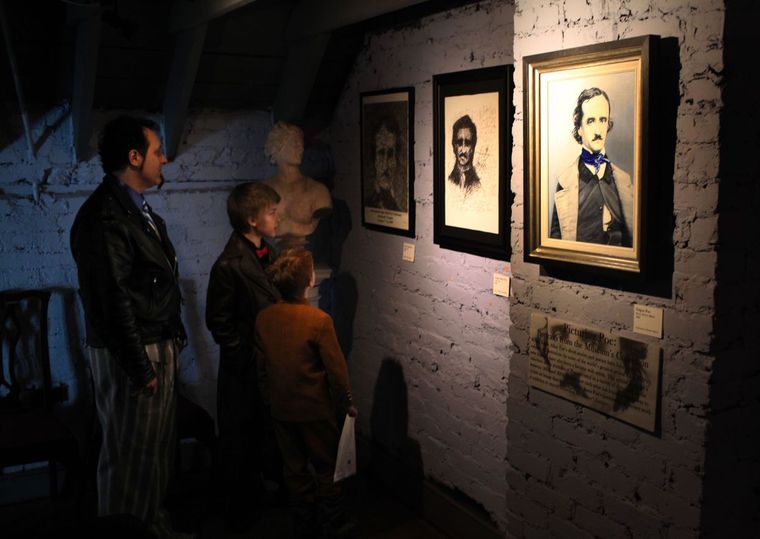 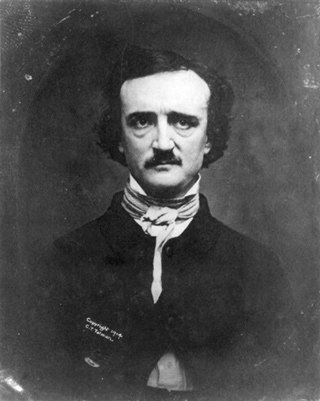 The Old Stone House in 1869 (image from the Poe Museum) 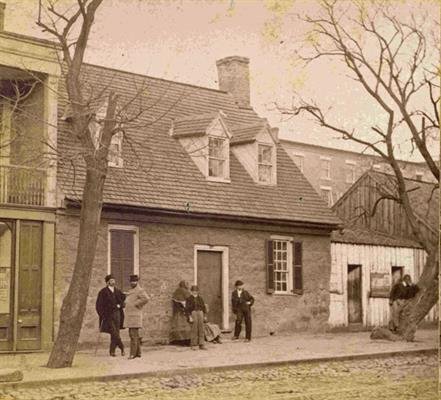 The Poe Memorial Association at the museum's opening ceremony, 1922 (image from the Poe Museum) 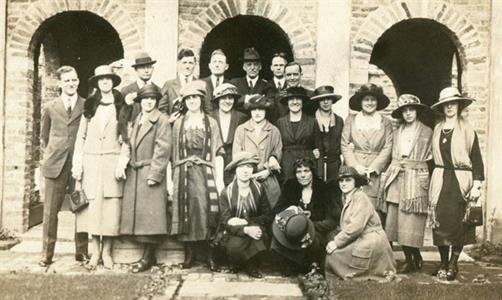 The Enchanted Garden (image from the Poe Museum) 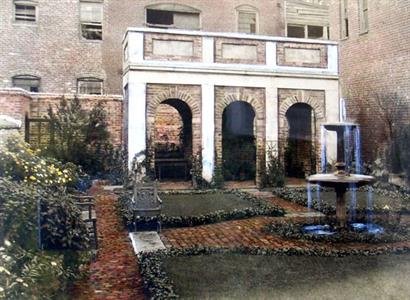 Considered "America's Shakespeare," Poe is best known for his short stories and poetry. Edgar Allen Poe was born on January 19th, 1809 in Boston, Massachusetts, but grew up in Richmond, Virginia. His parents, David and Elizabeth Arnold Poe, were actors with Mr. Placide's Theatre Company of Boston. Both died before Poe was three years old, and he and his younger sister Rosalie were taken in by separate Richmond families. Edgar grew up with foster parents John and Frances Valentine Allan and adopted their last name as part of his own. He was encouraged in his literary efforts by Jane Stith Craig Stanard, the mother of a schoolmate. In his first year at the University of Virginia in 1826, Poe and his foster father had an argument which led to his withdrawal from school. After moving to Boston, Poe published his first book called Tamerlane and Other Poems in 1827. Poe spent the next two years at the West Point Military Academy and in the army, publishing again in 1829. Afterwards, he moved to Baltimore and lived with his aunt, Maria Clemm. While there, he fell in love with his cousin Virginia Clemm and won a literary contest. In 1835, he moved back to Richmond for a job as assistant editor of the Southern Literary Messenger. His aunt and cousin accompanied him back to Richmond, marrying Virginia in 1836.

The Southern Literary Messenger gained Poe a reputation as a critic, poet, and writer. One of his major works, a collection of suspenseful short stories entitled Tales of the Grotesque and Arabesque, was published in the late 1830s, and by 1845, Poe was known as a literary sensation. Poe left the Messenger with the intention of publishing his own literary magazine, taking editorial work in Philadelphia and New York until Virginia's death in 1847. On his final visit to Richmond in 1849, Poe gave a lecture at the Exchange Hotel and visited his sister's foster family, his friends in the Talley family, and his teenage sweetheart, Elmira Royster Shelton, to whom he allegedly was engaged. Poe performed his last reading of his most famous poem, "The Raven," at the Talley's home on September 25, 1849. He died mysteriously in Baltimore on October 7, 1849.

James Howard Whitty, an Edgar Allan Poe researcher and collector, met with fellow enthusiasts in 1906 to form Richmond's Poe Memorial Association. The group's goal was to create a monument to the author, but they found little public support. When the offices of the Southern Literary Messenger, the magazine that launched Poe's journalism career, were slated for demolition in 1915, the members of the Poe Memorial Association came together once again, requesting the building for a National Poe Museum. The Messenger building was nonetheless demolished for a street widening project which never actually happened, but Whitty saved much of the material for use elsewhere.

At the same time, Archer and Annie Jones ran a colonial history museum at the Old Stone House. Historic in its own right, the Old Stone House is Richmond’s oldest building and its only surviving Colonial Era house. First documented in 1783 as being owned by Samuel Ege, a local flour inspector, recent dendrochronology has revealed that the house was constructed around 1754. The house passed through descendants of the Ege family until acquired by the Preservation of Virginia Antiquities (now known as Preservation Virginia) in 1911, and subsequently leased to the Jones.

After meeting with Whitty, Annie Jones decided to convert the lot behind the museum into a Poe memorial garden and shrine using the bricks and granite salvaged from the Southern Literary Messenger office. The Enchanted Garden incorporated specific plants mentioned in the author's works and plants propagated from the grave of Poe's mother and his foster father's garden. In the end, the Jones converted the colonial history museum into the Poe Shrine, restoring the Old Stone House in the process and incorporating materials from the Messenger building. Whitty's Poe collection became the core of the museum, with donations from other Poe collectors and relatives. The museum opened to the public on April 26, 1922, with early visitors including Gertrude Stein, H.P. Lovecraft, Henry Miller, and Salvador Dalí. Quickly outgrowing the Old Stone House, in the 1930s the Poe Museum expanded into three additional structures, including one containing the original staircase of Poe's childhood home. In 1970, a restoration project on the Old Stone House removed later additions in order to recreate the house’s Colonial era appearance. In 2012, Preservation Virginia officially donated the Old Stone House to the Poe Museum. The Old Stone House was designated a Virginia Landmark on October 16, 1973 and added to the National Register of Historic Places on November 14, 1973.

Today, the museum holds the largest and most comprehensive collection of Edgar Allan Poe artifacts, memorabilia, and documents. These include original manuscripts, letters, personal possessions and clothing, daguerreotypes, and even a lock of Poe's hair.