The Catalina Casino has been the face of Catalina Island ever since it's creation. Founded by William Wrigley Jr in the early eighteenth century, it has served many purposes over the years but is known today as a museum. Although the museum focused on the modern pre-World War II, today it has a massive collection of from its native population and its Hollywood background. From the fancy architecture to the lovely art murals, there is something for everyone to enjoy.

A picture of the Catalina Casino in 2006. 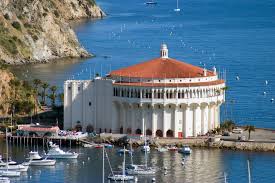 The movie theatre inside the casino. 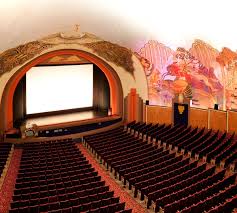 In 1919, William Wrigley Jr, the chewing gum magnate and owner of the Chicago Cubs, purchased the controlling stake of Catalina Island, located off the coast of California, only 22 miles southwest of Los Angeles, in hopes of creating an ideal vacation spot. He used this premier property on Sugarloaf point to build a lavish building that was used as a ballroom and also as a high school until the growing population required something more permanent. Its original name was Sugarloaf Casino, referring to the Italian word for meeting place; not to be confused with the gambling kind of casino. It attracted many big bands of the time as well as serving as the city's center

Then in 1929, Wrigley and David Renton spent two million dollars to recreate into the first theatre designed for movies with sound and became the new Catalina casino that remains today. This place would become a common spot for Hollywood tycoons to visit on their yachts and showcase their films. Its designers were Sumner Spaulding and Walter Weber and they forged it in a Mediterranean Revival style with it an elegant white appearance and tall pillars with an ocean view balcony. It received the Honor Award from the California branch of the American Institute of Architects  as "one of the outstanding architectural accomplishments." What used to be the old casino was transformed into one of the world's largest aviaries, which was founded by Mrs. Wrigley but was later shut down after 1966.

On the inside you will find beautiful murals, ranging from an Atlantis inspired sections to renaissance recreations, decorating the walls around you. You will also find two large staircases, modeled after ones in Fenway Park, that allows access to the enormous ballroom with amazing acoustics. In 1953, the Catalina Island Museum was established by Phillip K. Wrigley in attempt to immortalize the islands pre-colonial history, as well as his father's pre-war development. Despite many of the native Indian artifacts being moved to the Fowler Museum at UCLA, there are still many of fascinating things to see, including the world's largest collection of Catalina Products and the single largest photo archive of an Island's history. The museum, which moved to a location about a half mile to the south, is constantly adding new technology and exhibits about the beautiful history of this island.