The Public Hanging of Laban Walker.

On August 21, 1878, twenty-one year old Laban Walker shot and killed Patrick Nolan. Over a year later, Walker was found guilty of first degree murder and sentenced to hang from the neck until dead on the lawn of the Wayne County Courthouse. On November 28, 1879, a crowd of 7,000 to 10,000 people flooded into Wayne (then known as Trout's Hill) to witness the execution. Reports say the hanging had a carnival-like atmosphere. On that day shortly after two o'clock, Laban Walker was executed. This was the first and only civil execution to occur in Wayne County.

The courthouse as it was when the hanging took place. This building burned to the ground in 1921. 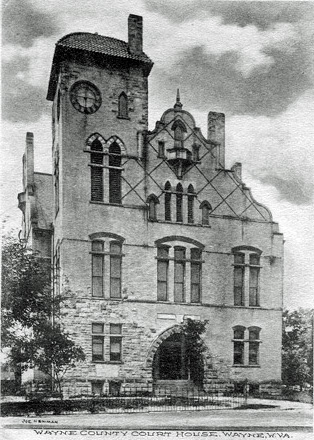 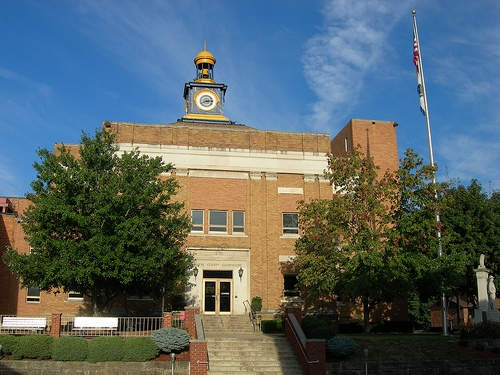 A Cincinnati newspaper article about the hanging. 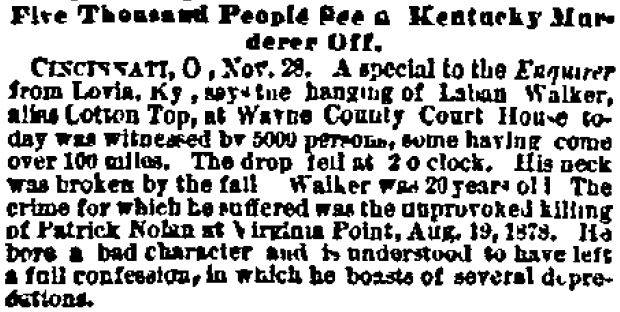 On August 21, 1878, a young man named Laban Walker walked into a saloon at Virginia Point, West Virginia (present day Kenova) and murdered a man named Patrick Nolan. It was rumored that a local business man had an unsettled feud with Nolan and had paid Walker execute the murder. After he fatally shot Nolan, Walker attempted to flee to Ohio across the Ohio River but was quickly apprehended. He was taken to the county jail at Trout’s Hill (the present day town of Wayne) to await trial.

Walker was finally put on trial on August 9, 1879. The Honorable Eustace Gibson of Cabell County presided over the trial and the jury consisted of Alvis Maynard, Eli Adams, Charles Tooley, Andrew J. Fry, Joel Adkins, M. A. Stephenson, Samuel Roberts, Michael Peters, Marion Preston, George P. Dillon, Anthony Hampton, and Levi Hampton. Despite a not guilty plea, Walker was found guilty of first degree murder. When asked if he "had anything to say to why a sentence of death should not be pronounced upon him”, Walker did not reply and was sentenced to be hung from the neck until dead.

Walker sat in jail until the 28th day of November, 1879. He was to be hung on the courthouse lawn. On that day, one of the largest crowds every gathered in the county flooded into the town to witness the hanging. Local newspapers estimated that a crowd of 7,000 to 10,000 came to Wayne (Trout's Mill) despite gloomy and rainy weather. At the time, the town had a population of only 200 people. The hanging had a carnival like atmosphere where vendors sold food, drink, and souvenirs.

Just after two o’clock, Laban Walker was led from the jail to the northeast corner of the courthouse lawn where a gallows had been constructed. Reports state that upon reaching the steps of the gallows he exclaimed, “Oh I don’t want to go up these!” and had to be carried up the steps. Sheriff Henry Fisher Bowen carried out the execution. Walker had a noose put around his neck and stood on a trap door supported by a rope. Sheriff Bowen pulled a small hatchet from his pocket, cut the rope, and twenty-one year old Laban Walked fell to his death. This was the first and only civil execution that has ever taken place in Wayne County. Since then, the hanging has become a popular local folk tale.