The Memorial Tunnel was a two-lane tunnel for vehicles and formerly carried the West Virginia Turnpike through and under Paint Creek Mountain in Standard, West Virginia in Kanawha County. In 1976, upgrades began on the Turnpike and the expansion of the road's width caused some problems as vehicles were required to merge from the four-lane highway into the two-lane tunnel. The tunnel has been closed to interstate traffic since 1987, when the construction of the current section of the turnpike that bypasses the tunnel was completed. Today, the entrance to both sides can still be seen from the Turnpike. The tunnel now serves as training for military and first responders who come to the tunnel from all over the United States to train underground in the now-closed tunnel. First responders use the tunnel to train for fires and other emergency situations that may arise in tunnels, while the military trains here to prepare for underground operations without alarming the general public.

The entrance to the Memorial Tunnel 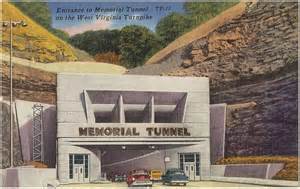 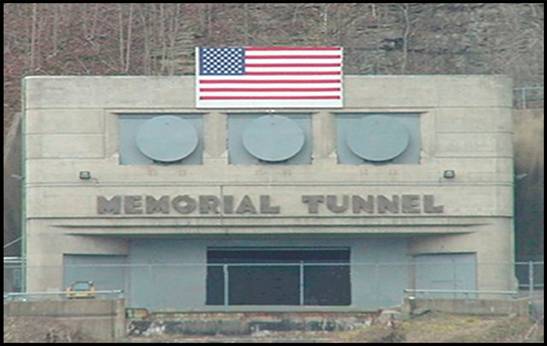 Interior view of the Memorial Tunnel 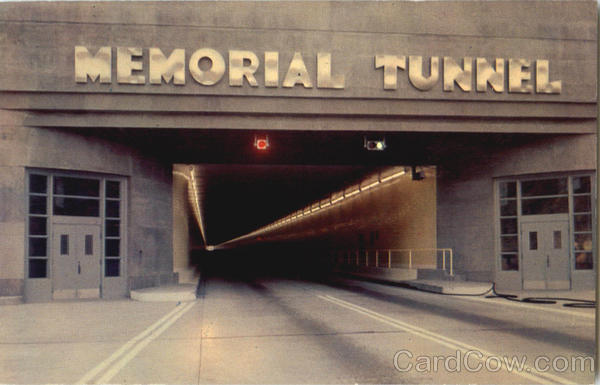 Construction of the Memorial Tunnel started in 1952 and required the movement of 91,000 cubic yards  of earth. The tunnel opened to traffic on November 8, 1954, and cost $5 million. The tunnel was the first in the nation to have closed-circuit television monitoring.

In 1976, upgrades to the West Virginia Turnpike began, and by 1983, the narrow width of the tunnel created a problem. The new turnpike was a 4-lane, divided highway which meant that drivers had to merge into the two-lane, two-way traffic configuration of the tunnel.  Drivers also had to go to a lower speed limit when entering the tunnel. This resulted in traffic backups during periods of increased traffic, such as holiday travel seasons. Instead of upgrading and expanding the tunnel, a 1.72 miles extension was constructed to serve as a bypass for both the tunnel and the Bender Bridge. The new section of road cost $35 million to complete and required the removal of 10,000,000 cubic yards of earth. In addition, 300,000 tons of coal was removed from the mountain during the construction process. The tunnel closed and the last car would go through the tunnel on July 7, 1987.

In the mid-1990s, the Department of Transportation used the tunnel for smoke, fire, and ventilation experiments. The experiments were to help design better-developed ventilation systems for the tunnels being constructed as part of the Big Dig in Boston. The results of these tests were also integrated into the design of the Channel Tunnel. The Memorial Tunnel Fire Test Program has helped change ceiling materials used in tunnel construction and also, in the use of jet fans for ventilation during construction.  Then around 1997, the tunnel became a storage site for the West Virginia Turnpike.

By 2000, the tunnel was chosen to be where the Center for National Response would conduct anti-terrorism training exercises. The current facilities offer a rubble area to simulate collapsed buildings, an emergency egress trainer, and a subway station, complete with 800 feet of track and two subway cars from Boston's Green Line. The tunnel also has a drug enforcement section, a highway tunnel section, complete with a New York City Transit Authority bus, firetrucks, a tractor-trailer and other vehicles, and a 50-car pileup wreck complete with hazardous materials.

Emergency responders from around the country now send their personnel to West Virginia to train in the facility. In all, about 160,000 first responders have been trained by West Virginians who man the training ground. Ted Kramer, the deputy project manager for RPI, the company that was chosen to turn the tunnel into the training site, said, “There’s no other place in the country where you can go into this kind of an environment and do this kind of training.”

Not open to publc