The Mercury Theatre was a repertory company formed in 1937 by John Houseman and Orson Welles, who was only 21-years-old at the time. The success of the group's first production, Julius Caesar, helped the company secure the use of the Comedy Theater which was located on this corner from 1909 to 1942. The theater was renamed the Mercury Theatre in 1937 and became the Artef Theatre shortly after Orson Welles moved to California in 1939. The group performed at the theater until 1940, however, it was a radio program called The Mercury Theatre on the Air that led Orson Welles' rise and his most famous performant, the farcical "War of the Worlds" radio broadcast.

The plaque is located on the side of 1065 W. 41st Street, between Broadway and Sixth Avenue. The building address is now 5 Bryant Park. 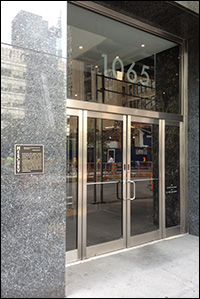 The plaque on the side of the building 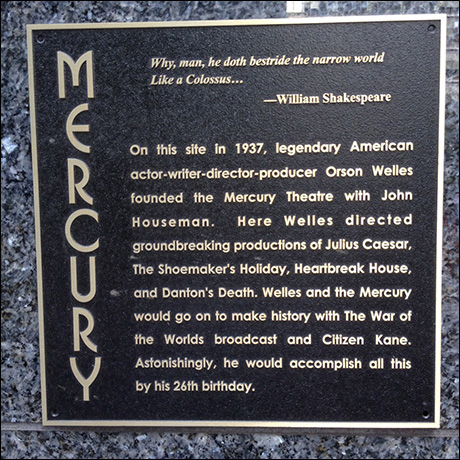 Orson Welles was born in Kenosha, Wisconsin in 1915. He had early theatrical success after studying theatre in Ireland. By the time he was 19, Welles had made it onto Broadway in a production of Romeo and Juliet. In this Broadway production, he met John Houseman, who he would start the Mercury Theatre with.

After his success in New York with the Mercury Theater, later The Campbell Playhouse, he moved to L.A., where he tried his hand at filmmaking. At the age of 25, Welles made the iconic film Citizen Cane (1941). At the time, the film was a bomb in the box office. However, the film would later be recognized for innovations in filmmaking and storytelling. After Citizen Cane, Welles had up and down success in Hollywood, even exiling himself for ten years from the city because of his hatred for producers there. Nevertheless, he is recognized as one of the greatest artists of his time, having helped shape both the radio and film industries.

The Mercury Theatre on the Air's dramatic broadcast of H.G. Well's novel War of the Worlds is today the most recognized broadcast to come from the Theatre. At the time, many people listening to the broadcast did not know that it was fake. They thought aliens were actually invading and began trying to get out of town and avoid the extraterrestrials at all cost. Welles was forced to go on the air and tell everyone that it was only a story and the planet wasn't under attack. Luckily for Welles, the broadcast helped launch his career even further as he was given a contract from Hollywood soon after. In 1938, the name of the Theatre was changed to The Campbell Playhouse, and it was moved to Hollywood in 1939. Welles left The Campbell Playhouse in 1940.