Spruce Knob is located in the Monongahela National Forest near the cities Whitmer and Harman, WV. This landmark is a very unique one. It is known for being the highest point in West Virginia and of the Allegheny Mountains. Spruce Knob has many other records, but is known for their interesting trees. The conditions are so harsh on top of the peak that the trees only grow branches on one side of the trunk! There are also many different fascinating plants and animals that can survive in the peaks harsh conditions.

This is a view from Spruce Knob. One can see many other knobs and mountain peaks from this elevation.

Whispering Spruce Trail has beautiful foliage and vegetation around its path. This trail goes all the way to the top of Spruce Knob but loops around so you can see a panoramic view of the mountains. 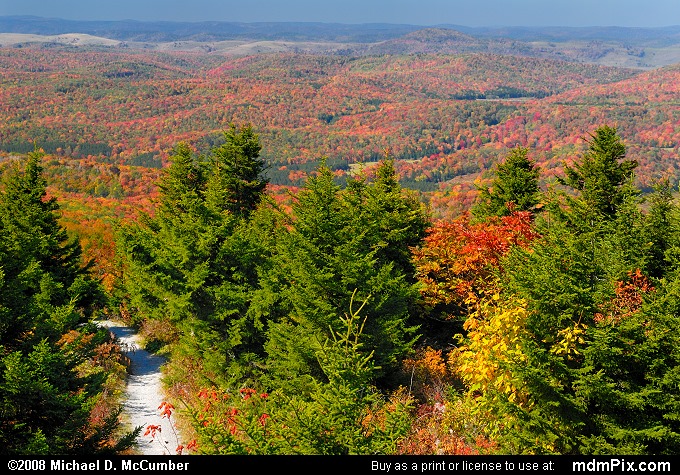 This is a picture of some of the trees on Spruce Knob. These trees only grow branches on one side of the trunk because of the harsh wind and weather conditions that they experience. 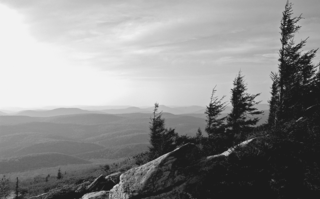 The Summit Observation Tower allows one to see all around the view of the knob. It also has toilets, benches, and grills for visitors to use. 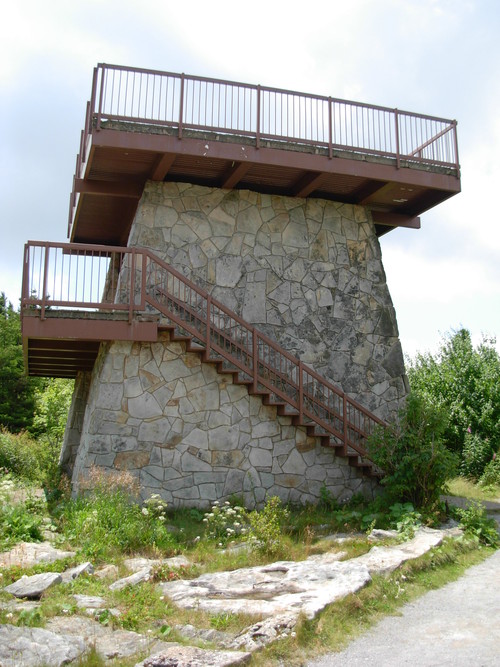 Spruce Knob is a very popular natural attraction in Pendleton County, West Virginia. Its location is in the Monongahela National Forest near the cities of Whitmer and Harman, WV.1 This landmark is part of the Allegheny Mountains that stretch across the state of West Virginia. What makes Spruce Knob so different than the other peaks of land around it elevation is at 4,863 feet, or 1,482 meters. This makes Spruce Knob the highest point in West Virginia.

Spruce Knob is not only the highest point in West Virginia, but it also holds many other rankings. It is also the highest peak in the Allegheny Mountains and the Appalachian Plateaus. It  'is also the 13th-most isolated peak (with approximately 175 miles of isolation) in the contiguous United States, the 14th-most isolated U.S. State Highpoint, the 23rd-most prominent (with 2781' of clean prominence) U.S. State Prominence Point, the 24th-highest U.S. State Highpoint, the 25th-most prominent peak in the United States located east of the Mississippi River, and the 28th-highest County Highpoint located east of the Mississippi River."3

The Knob's records are not the only interesting thing about it landmark. The land gets its name from the red spruce trees that are all over its surface. The wind and weather are extremely harsh on Spruce Knob, because of how high it is. Because of this, not much vegetation but the trees can grow on its surface. The plants can range from dwarf cornel to wildflowers that are more sparse with their flowers. These can only grow on the parts of the Knob with a lower elevation, because of the wind. The wind has also given the trees an interesting look to them. All of the trees on the highest point of Spruce Knob only grow branches on the side of the tree in which the wind blows. This makes them look like they only have half the branches. In some places, the trees only grow to shrub height, because of the conditions. Only few wildlife can thrive on Spruce Knob also, but the snowshoe hare, red fox, and many types of birds live there.4

Those interested in going to Spruce Knob could get to look at the marvelous landscape in a few different ways. One of these is to go to the Summit Observation Tower. This is a tower that is made of stone and steel where you can walk up and look over the entire area of the peak. The tower also provides guests with toilets, grills, and picnic tables.1 The best way to get up to the Knob is by taking the Whispering Spruce Trail. This half-mile trail loops around the entirety of Spruce Knob and allows one to view a panoramic view over the mountain. The gravel trail is more scenic with all of the vegetation and wildlife on the way up.1