New Orleans folklore is full of witches, voodoo, and the history of witchcraft. Marie Laveau, supposedly born September 10, 1794, is possibly the most famous "Voodoo Queen" in history. Many of the details about Marie's life are ambiguous, though her reputation was great both in and after her lifetime. Through her work as a hairdresser, Laveau gained access to many wealthy households, learning their woes and secrets along the way. As a Voodoo practitioner, she began to offer advice and potions to her clients, and a reputation of success quickly developed around her. Later her reputation only grew when she grew ill and bedridden. People began to discuss seeing the same Marie Laveau walking out and about, only with an eternally young face resumed. It is now believed to have been her daughter, and Marie Laveau II is believed to have held further assemblies and events after her mother's death. Her final resting place was supposedly in a tomb in the St. Louis Cemetery No.1 (though this is contested as actually being the resting place of a different Voodoo queen named Marie Comtesse). Nevertheless, many people of all ages still visit the tomb, both for entertainment and to make their own wishes to Marie Laveau.

The most popular depiction of Marie Laveau today. 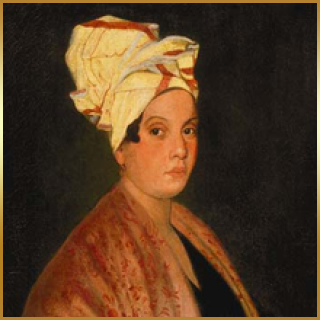 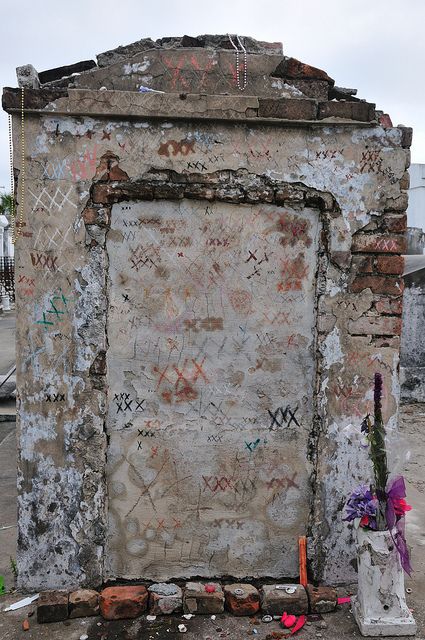 The plaque on the tomb. It tells the history of the crypt and the woman who might be inside of it. 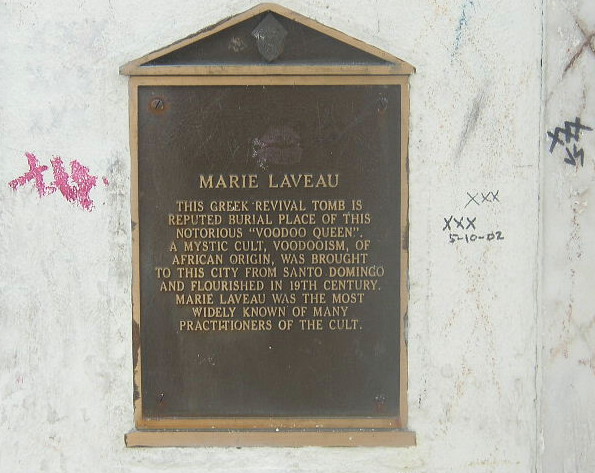 In December 2013, a mysterious vandal painted the tomb of Laveau bright pink with latex paint. The cemetery had to begin the process of removing it quickly, because the latex would not allow the old plaster to breathe, thus destroying the tomb. 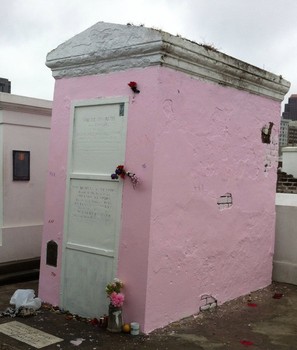 The tomb of Marie Laveau is a very interesting place with a great history. Marie was known all throughout the south, because of her practice in voodoo. Her life started out back in 1794. Marie Laveau was born a free woman of color on September 10, 1794. Marie's father was a rich Creole plantation owner named Charles Laveaux and her mother was her father's mistress, Marguerite, making her Charles's illegitimate daughter. Not much is known about Marie's childhood, possibly because of this fact.1 Many actually thought that her father was a rich white plantation owner, but in reality, he was a free man of color who owner a plantation.2

Not much is really known about Marie's life in general. We do know that Marie grew into a beautiful young woman. She was said to have dark skin and large, bright, hazel eyes. Her dress was very gypsy-like and had many dark colors. Most of the time she was seen with hair up in a bandana on her head and showy jewelry.2 She was also a devoted Catholic and attended mass daily.4 By the time she was in her 20's, she was married to a man named Jacques Paris who was a carpenter. It is not known whether or not they had children before his disappearance years later. It is unknown what happened to Paris and he was just presumed to be dead. Marie took on the name "Window Paris."

After becoming a window, she became a hairdresser who helped many wealthy, white and Creole women.2 This is when she began her voodoo practice. These women confided in Marie with their secrets and she gave them great advice about family, love, and finances.3 Because of the information that she had, she made people believe more and more about the powers that she had. The news of her voodoo started to spread. She started having private consolations and made what she called "gris-gris." These were physical objects that became mystified with incantations. These objects could have been voodoo dolls, love potions, or money that she cast a spell on. She sold these things to her clients and they were supposed to work in the ways that she enchanted them. Her voodoo specialties were romance and finances4, but she also made gris-gris for luck, legal matters or to uncross hexes.2 She also gave palm or fortune readings.

After this, she became interested in Msr. Louis Christophe Duminy de Glapion and they had a relationship until his death in 1885. The two never married but they had 15 children together, which caused her to have to give up her job as a hairdresser but did not give up her voodoo. At the age of 70, she performed her last act of voodoo and announced she retiring, but never really retired. It is said that she continued to visit the sick and give readings in her home. She died at the age of 87 peacefully. She is still known today for all of the charitable things that she did.3

The location of Marie Laveau's tomb is a debate that has not yet been solved. Many say that her remains are in a tomb in the St. Louis Cemetery No. 1 marked Laveau-Glapion tomb, but others argue her final resting place was in St. Louis Cemetery No. 2 in a tomb called the “Marie Laveau Tomb.” This controversy was sparked because her daughter, Marie Laveau Glapion II was also buried in one of the two crypts. Her daughter was also into voodoo and was well known while alive. There is more evidence marking that she was buried with her late lover in the Laveau-Glapion tomb, even though it does not explicitly say her name on it.1

Every day, people go to Marie's supposed tomb and make wishes. Folklore says that if you want a wish granted you must "knock three times (to wake her from her sleep of the dead) upon the face of Marie Laveaus' tomb. Mark the tomb with XXX in chalk or brick, knock three times again then make your wish. Then you must leave an offering."5 Another one states that one must break a piece of brick off of another tomb, and put three X’s onto the tomb. Next, you would spin around three times, scream your wish, and then leave an offering. If your wish is granted, then you go back to the tomb and circle your  X’s.6,7

In recent years, the cemetery has been trying to get people to shy away from the folklore. This is because, in December 2013, a mysterious vandal came into the cemetery and painted the tomb a bright pink color with latex paint. Many of the police believed it was a "mentally unstable" homeless man who believed that he was doing a service to the tomb by covering up the defacement of property. The cemetery could not leave the tomb pink, because the latex paint would cut off the release of moisture and cause the plaster to deteriorate. The staff was not sure how long it would take to remove the paint, because of the already deteriorating tomb was falling apart, but they got lucky. The day had not been very warm, so the paint had not adhered very strongly, causing some of it to be easily flaked off. After several light power washings and paint layers, in 2014, the tomb has been fixed. Tour guides are now advising visitors to not mark on the tomb and are offering alternative ways to get their wishes granted.