Businessman and civic leader Walter Sondheim, Jr. is best known for his support of social justice and leadership of the Baltimore city schools in the wake of the Brown v. Board decision. 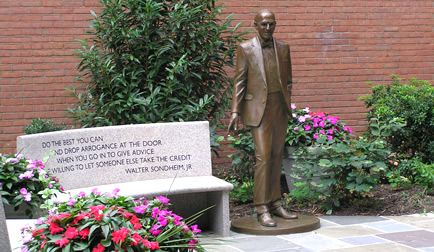 Sondheim was the president of the city's school board in 1954 when the Supreme Court declared that racial segregation was a violation of the 14th Amendment. Despite strong opposition, Sondheim worked to make Baltimore the first major city in a Southern state to integrate its schools. The businessman and school board leader used his influence to push for changes to the status quo that seem modest in retrospect until one looks at the experience of neighboring cities that explicitly maintained a system of segregation for years to come. Demonstrating the unpopularity of the Jewish leader's decision, he and his wife Janet endured threats, including a cross that was set on fire in front of their home.
Sondheim is also known for his efforts promoting the waterfront development of the Inner Harbor that spurred urban renewal of a formerly blighted area of Baltimore. During his 15 years as chairman of the redevelopment project, Sondheim accepted a salary of $1 per year.