Situated in Marshall County, West Virginia, on Big Grave Creek Road is Rosby's Rock. It marks the spot where the last spike was driven that completed the Baltimore and Ohio Railway. This was the first rail line linking the Atlantic Ocean and the Ohio River Valley. The final spike in the rail line was driven on Christmas Eve in 1852.

Rosby's Rock marks the location where the Baltimore and Ohio Railroad was completed in 1852. 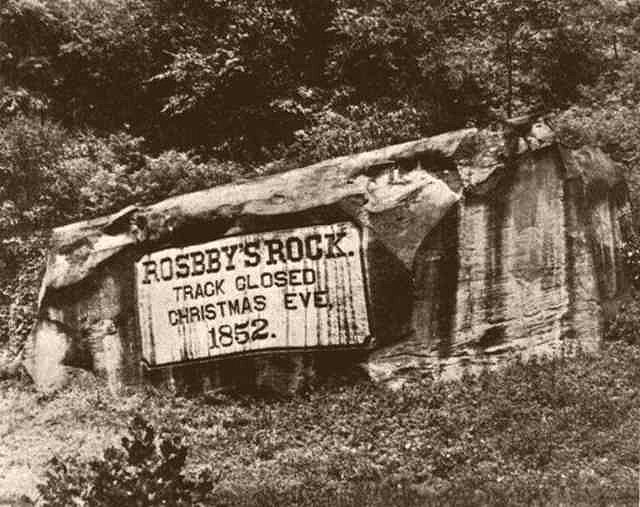 The rail tracks were removed in 1974. 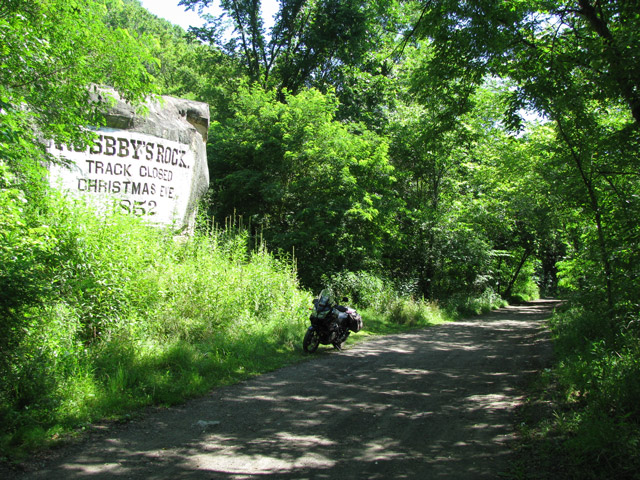 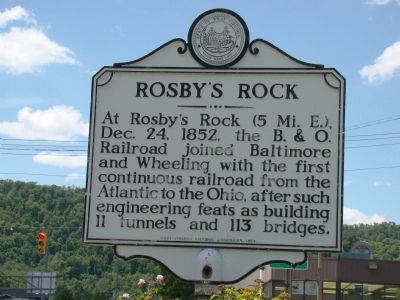 The Baltimore and Ohio Railroad was incorporated in February 28th, 1827 and the construction began on July 4th, 1828. The first stone was laid with much fanfare by Charles Carroll, the last surviving signer of the Declaration of Independence. The new railroad was not without competition, as ground was broken on the same day for the Chesapeake and Ohio Canal, by former President John Quincy Adams.

The first thirteen miles of the B&O Railroad ran from Baltimore, Maryland to Ellicott's Mills, Maryland and opened in 1830. It was along this stretch of railway that Peter Cooper's steam locomotive, the Tom Thumb, ran demonstrating that steam locomotion was feasible. During the Civil War, the railroad moved many union troops and a large number of supplies and came under constant attack. By the 1860s and 1870s, the railway had reached Chicago, Illinois and Saint Louis, Missouri.

The final spike of the B&O Railroad completing the line between the Atlantic Ocean and the Ohio River Valley was driven on Christmas Eve 1852. To commemorate the historic event the words, "Rosb(b)y's Rock track closed Christmas Eve 1852," was carved into a sandstone boulder approximately 60 feet long by 20 feet thick. To celebrate the linking of the Atlantic Ocean and the Ohio River a celebration was held in Wheeling, Virginia (this was before the forming of the state of West Virginia).

Rosby's Rock saw 122 years of passenger and freight trains pass it every day. The line was closed and the tracks removed in 1974.