This artistic phenomenon is created by using a completely darkened room, a sunny day, and a simple pin hole. By putting a hole in the material that keeps sunlight out a reflected image of the view in front of the hole will be projected behind you, only upside down. A man by the name of Floyd Jennings took this idea and ran with it, making a camera like building that you can walk into to see the full effect of the Camera Obscura.

Camera Obscura was built in 1946 and is likely the last one in the country over 50 years old. 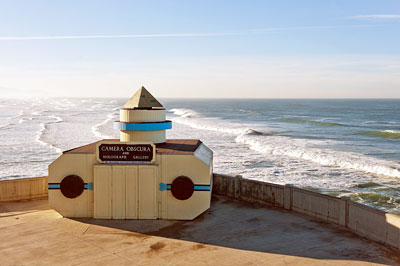 The Camera Obscura, a Latin term that means, "this dark room," has been a phenomenon that many of the world's greatest minds have studied and made changes to that have made modern day inventions like the camera possible. Men like Leonardo Da Vinci, Aristotle, and the Arabian scholar Alhazen of Basra. The basis for the Camera Obscura is a room with very heavy darkened curtains to block out the light, a sunny day outside, and a pin. To create the effect of the camera obscura you simply put a hole in the heavy material. With the hole in the material you can see the outside world normally, but on the flat horizontal surface behind you the image is projected upside down, but just as clearly as looking through the pinhole. This was the level of simplicity to it until the 16th century when inventions like the mirror and lenses came into play.

Previously stated, the camera obscura phenomenon made inventions that we all know today possible. The camera obscura formula was studied and one inventor placed a thin material that reacted to bright light. When a button was pressed the light came through the lenses and burned an image that you want captured on to the light reactant paper. This was the basic blueprint of the camera in the late 17th century.

A man by the name of Floyd Jennings had also heard of this artistic phenomenon and took it upon himself to make the camera obscura idea into a building. Floyd Jennings was not the first to build a camera obscura building. In fact, there was a previous camera obscura in the location where Jennings made his. The original was one of the tourist attractions to get destroyed in a fire along with the Cliff House on September 7th, 1907. Floyd Jennings' Camera Obscura building is one of the two in San Francisco. Jennings placed his building right off of the Playland-at-the-beach to get more tourist rolling in to see this artistic wonder.