The Versailles Castle, Bed and Breakfast

The Versailles Castle, also known as the Martin Castle, is a castle in Kentucky near the Woodford County line. It can be seen to the right of Versailles road. The Versailles Castle overlooks the Elkhorn Creek on the Woodford/Fayette county line. Construction began in 1969 by its original owners. It has since changed hands undergoing a major renovation in 2004. Today it operates as a bed and breakfast and special functions venue.

The Castle before the fire. 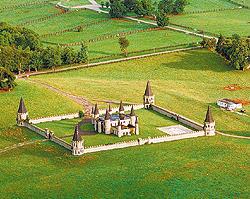 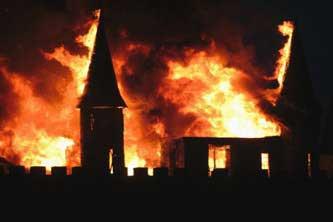 The Castle after renovations from the fire. 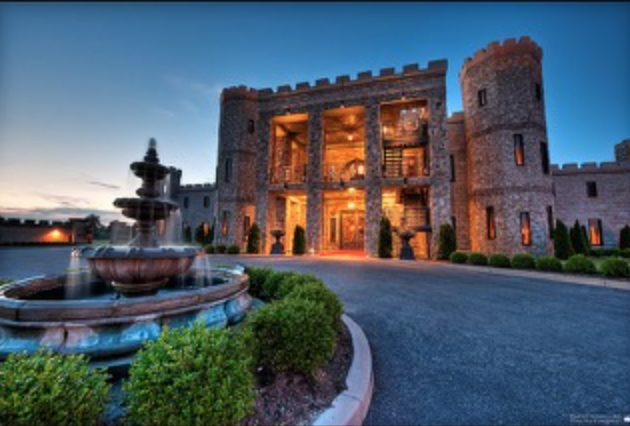 The Versailles Castle, also known as the Martin Castle, is a castle in Kentucky near the Woodford County line. It can be seen to the right of Versailles Road. The Versailles Castle overlooks the Elkhorn Creek on the Woodford/Fayette county line. Construction on the castle was started by Rex Martin and his wife Caroline Martin in 1969. They had just returned from a trip to Germany and became inspired by many famous buildings they had seen in Europe. When finished, it was to include seven bedrooms, fifteen bathrooms, a fountain in the driveway, and a tennis court.

In 1975, the Martins separated, and the castle was left unfinished. However, it became a popular roadside photo opt for tourists. In 1988 Rex Martin put it up for sale, but died before it was sold. In 2003 the so-called "Versailles Castle" was sold for 1.8 million to Thomas Post, a lawyer from Miami who graduated from the University of Kentucky, and the name was changed to "The Castle Post". It had been rumored to be turned into a medieval restaurant/museum – however, nothing was ever confirmed.

On May 10, 2004, after various renovations had taken place, the newly installed wood and wiring caught fire in the building. Post, who was at his home at the time of the fire, tried to salvage as much as he could. He had already spent hours renovating the castle and was now dedicated to rebuilding it. By the end of the renovations, the total cost of the reconstruction project was enormous totaling almost half the original cost of the castle itself. Hence, it was put up for sale once more.

The Versailles Castle or “Post Castle” became a landmark in Kentucky. People driving Versailles Road were surprised by the sight of a stone castle with extensive walls and turrets along the side of the highway. However, no one knew much about it. No one lived there, and no one answered the phone if you called the number on the sign. The Versailles Castle sat empty for more than thirty years.

Additional features and rehabilitation projects were finally finished in 2008. New additions included twelve suites, a library, music room, dining area, grand ball room, swimming pool, garden, basketball area, bar, and a tennis court. It is used for tourism, fund raisers, special events, and corporate functions. It has sixteen bedrooms, including four in the original round corners. Their on-site restaurant sources ingredients from local farms. However, their goal is to create as much food as possible on their own 55 acres, and they’re working towards that goal.

In November, 2010 the castle was listed at a price of what was believed to be 30,000,000. Post said he would continue to operate it as an inn while it is listed. The castle eventually sold to its current owner, a group of investors, in mid 2017 for roughly nine million dollars. Although after many interviews, the official names have yet to all be released, it is now being operated by the company Castle Catering – a rather telling name for the rich piece of history in Versailles, Kentucky.