The Capitol of Williamsburg 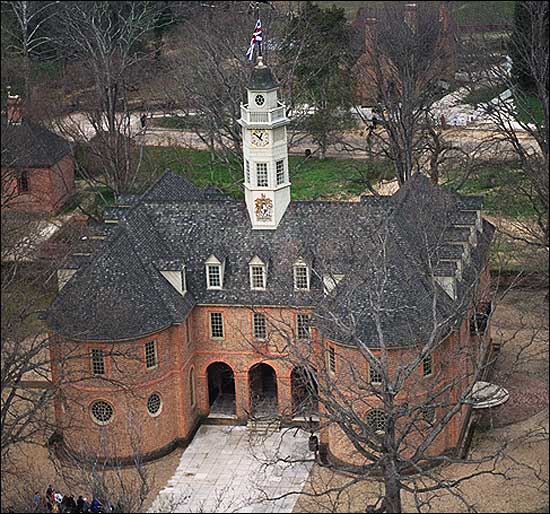 The Capitol of Williamsburg is the former capitol of the Colony of Virginia and housed the colony's legislative body, the House of Burgesses. The building acted as the capitol until 1779 when the legislature moved to Richmond, Virginia. The building standing today is the third to be built on the site and is open to public tour daily. The area is surrounded by historical Williamsburg.

Williamsburg was a settlement near the first English settlement in the New World, Jamestown. Williamsburg developed into a prosperous town and grew in size, leading to the movement of the capital from Jamestown to Williamsburg. The capitol at Jamestown had burned down three times and instead of rebuilding, the House of Burgesses was moved to Williamsburg in 1698. Another reason for the move was to get further inland and away from the swamps surrounding Jamestown. The first Capitol building in Williamsburg burned on January 30, 1747 due to chimneys that were added in 1723.

The second Capitol Building was built and the House of Burgesses met there for the first time in 1753. The Capitol building would be a backdrop for the coming revolution as George Washington, George Mason, George Wythe, Richard Henry Lee, Thomas Jefferson, and others all played a role inside this building. On May 29, 1765, Patrick Henry gave his famous Caesar-Brutus speech against the Stamp Act. George Mason also gave his Virginia Declaration of Rights in early 1776. The Virginia legislature met at the building for a final time on December 24, 1779 and the capital of Virginia was moved to Richmond. The building was later occupied by the British and was allowed to fall apart until the early 20th century.

The building standing today is the third and was built from funding by John Rockefeller Jr. The new building, based more on the first capitol, was opened to the public on February 24, 1934. The building is listed on the National Register of Historic Places as part of the Williamsburg Historic District. It remains open for public tours.