A small number of officials in Kansas began to recruit African American troops in the summer of 1862--a time when the War Department forbid Black enlistment in the army. The First Kansas Colored Volunteers, and African American infantry unit that was raised prior to the Emancipation Proclamation, fought to defend the Union against Confederate partisans at the Battle of Island Mound, Despite the fact that the United States government did not recognize their service, the men of the First Kansas Colored Volunteers defended the state of Kansas against an invasion of Confederate partisans at Island Mound. Although it was a small battle, Island Mound was the first battle of the Civil War featuring an organized regiment of Black soldiers.

This marker pays tribute to the First Kansas Colored who fought for a government that would not recognize them as soldiers until after the Emancipation Proclamation authorized the recruitment of African American troops. 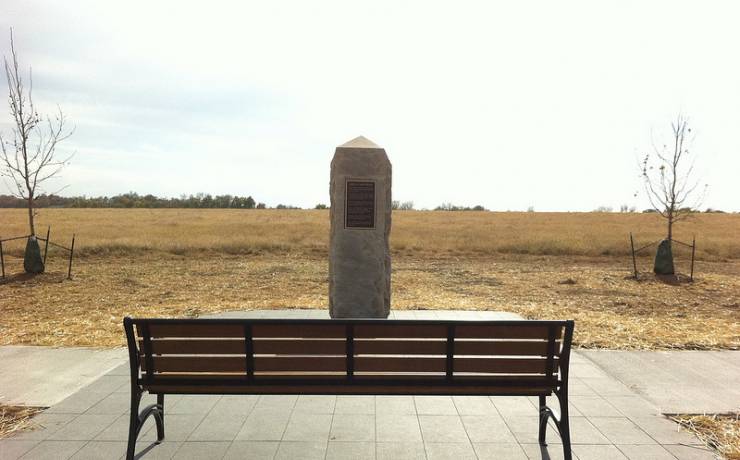 The 1854 Kansas-Nebraska act allowed states to choose whether they wanted to become slave states or free states. This led to an attempt by Missouri to make Kansas a slave state. Inevitably Kansas decided to become a free state and join the Union in the war against the south. Missouri then began to take to violence and Kansas responded with violence which almost began a civil war between the states before the Fort Sumter in 1861. The attack of Fort Sumter led to African American refugees filing into the state of Kansas.

In 1862, Kansas began making colored regiments and training them to fight. The first Kansas Colored Volunteer Unit was formed by August of 1862 and featured 500 trained soldiers. In October, orders came to send 225 troops to and cavalry to break up “bushwackers” in Bates County, Missouri. This resulted in the skirmish of Island Mound near the town of Butler, Missouri, just south of Kansas City. Seven Kansas enlisted men and one officer were killed, while an unknown amount of guerilla warriors were killed but it is estimated at 30.

Although it was a small skirmish, Island Mound was the first instance of African American troops engaged against Confederate aligned forces. It proved to the nation the former slaves were ready and willing to fight for their freedom. Reports of the troops became national attention and increased the number of enlisted colored soldiers. A monument is set to commemorate the bravery of the first Kansas Colored Unit. Nearby is a barn were the soldiers camped out and proclaimed it as “Fort Africa” the day before the battle took place.