Doak Campbell Stadium, located in Tallahasse, Florida, is the home of the Florida State University Seminoles. Built in 1950, the stadium has grown from seating 15,000 to 82,300 fans. Nicknamed "The Doak", the stadium is the pride of FSU's campus. In 64 years, the Seminoles have brought home to Doak Campbell 21 bowl game wins and three National Championships. 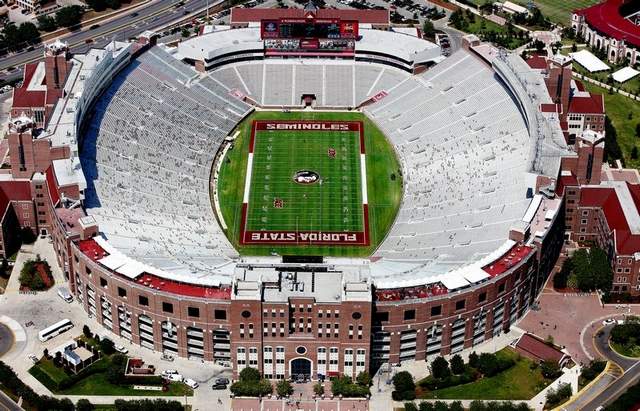 Nighttime at The Doak.

Langford Green, the courtyard in front of Doak Campbell Stadium.

Chief Osceola and Renegade storming the field before a game. 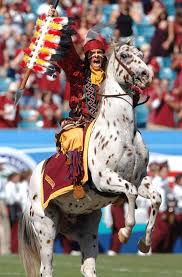 Doak Campbell Stadium is home to one of the most successful football teams in college history, the Florida State Seminoles. Located in downtown Tallahassee, Florida, the stadium is the pride of Florida State University and attracts hundreds of thousands of football fans every season.

Home of the Seminoles since 1950, Doak Campbell Stadium, nicknamed The Doak, has changed dramatically. From accommodating a mere 15,000 occupants to now being able to seat 82,300 fans, its size alone shows how much the Seminole fan base has grown. Over the years, renovations and changes have been made to the stadium, the most remarkable occurring in the 1990s when over 3 million bricks were laid over the existing steel framework, making The Doak one of the largest continuous brick structures in the country. These changes have made Doak Campbell Stadium to be the largest football stadium in the ACC with a final standing-room capacity of 84,500 people (Newcomb).

Florida State University named their football stadium after former university president, Doak S. Campbell. The first game ever played in The Doak occurred on October 17, 1950 when FSU played Randolph Macon, resulting in a win for the Seminoles and a final score of 40-7 (“Doak Campbell Stadium”). The same year, the FSU fight song debuted at the Seminoles’ homecoming game (FSU Traditions).

Former Florida State University head football coach Bobby Bowden was honored on November 20, 2004 in a ceremony where the field at Doak Campbell Stadium was named after him. Bowden had a home record of 156-26-2, making him one of the most victorious coaches in college football history. He coached the Seminoles to an astonishing 21 bowl game wins over the course of his 33 years at FSU, in addition to two National Championships in 1993 and 1999 (a third National Championship was won in 2013 under the coaching of current FSU head coach Jimbo Fisher) (“Bobby Bowden”) .

The Doak Campbell Stadium is the home of not only an incredibly successful college football team but is also the birthplace of several distinct Florida State University traditions. Before the start of each home game, a student dressed up to portray Seminole Indian Chief Osceola charges the field on a regal Appaloosa horse named Renegade and throws down a flaming spear near the 50 yard line. A 1965 FSU graduate named Bill Durham came up with the concept and after being granted permission by the Seminole Tribe of Florida, Chief Osceola and Renegade became a regular tradition of home games. The first time Chief Osceola stormed the field on Renegade was at the 1978 season opening game against Oklahoma State University. Women from the Seminole Tribe of Florida still hand make the regalia that is worn by Chief Osceola (played by a current student each year) and Renegade, and the Appaloosa horses used for the tradition are still supplied by Durham and his family (“FSU Traditions”).

The Florida State Seminoles also boast one of the most recognizable traditions in college sports history, their distinctive War Chant. The War Chant started during a 1984 game against the Auburn Tigers when members of FSU’s marching band, the Marching Chiefs, began doing a version of it. A group of students seated behind them caught on and added in the famous “War Chop” arm motion and continued to War Chant even after the Marching Chiefs had ceased. The rest of the season and throughout the 1985 season, the War Chant became a regular tradition in the student section and with the Marching Chiefs and by the 1986 season, the entire stadium was participating (“FSU Traditions”).

Florida State University has been the home of three Heisman Trophy winners, Charlie Ward (1993), Chris Weinke (2000), and Jameis Winston (2013) (“Past Heisman Trophy Winners”). Many other notable football players got their start at The Doak, as well, such as Fred Biletnikoff, Warrick Dunn, Derrick Brooks, and Deion Sanders.