John P. Parker was born in Norfolk, Virginia in 1827. His father was a white man, and his mother a slave. By the time Parker was eight years old, he was sold at a slave auction, ending up in Mobile, Alabama where a doctor bought him. The following eight years he worked as a house servant. Parker learned how to read and write, eventually going off to college with his masters’ sons. However, out of fear of him running away, the doctor brought Parker back to Mobile where he apprenticed at an iron foundry. In 1845, at the age of eighteen, Parker bought his freedom for $1800. Parker headed for Indiana, though he settled in Cincinnati. By 1853, Parker moved to Ripley where he operated an iron factory by day and was a conductor for the Underground Railroad at night. Ripley, Ohio served as a terminus for the Underground Railroad and abolitionists. A respected man in Ripley, Parker also invented a mechanism that pulverized tobacco, becoming one of the few African-Americans to obtain a patent in the nineteenth century. A hard-working man by day, Parker also worked fearlessly at night making many trips across the Ohio River to help runaway slaves. 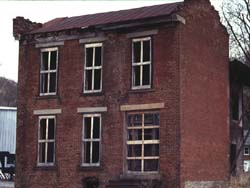 “For nearly fifteen years, John P. Parker rescued fugitive slaves, leading the Cincinnati Commercial Tribune to write, shortly after Parker’s death, 'a more fearless creature never lived. He gloried in danger. . . . He would go boldly over into the enemy’s camp and filch the fugitives to freedom.'” 1  According to his autobiography, His Promised Land: The Autobiography of John P. Parker, Former Slave and Conductor on the Underground Railroad, Parker did not work within the religious community involved with the Underground Railroad. However, Parker did on occasion work with other notable abolitionists and conductors on the Underground Railroad. The Reverend John Rankin, whose rescue of a runaway slave girl and her baby served as the inspiration for Eliza in Harriet Beecher Stowe’s Uncle Tom’s Cabin, also lived in Ripley, Ohio. From 1853 to the outbreak of the Civil War, Parker continued to smuggle slaves from Kentucky to Ohio, and the war enabled Parker to shield fugitive slaves further. He worked as a recruiter for the 27th Colored Regiment during the war years, enlisting the fugitive slaves he helped to escape.

Much of Parker’s life and dangerous exploits on the Underground Railroad came from a series of interviews conducted by Frank Moody Gregg, which comprise Parker’s autobiography, His Promised Land. It is noted that Parker rescued anywhere from several hundred to 1,000 runaway slaves. In one of Gregg’s interviews with Parker, he stated: “I had kept a diary giving the names, dates, and circumstances of all the slaves I had helped run away, which at that time numbered 315. As I had accumulated considerable property, as a matter of safety I threw this diary into the iron furnace, for fear it might fall into other hands.”1  Regardless if an accurate number will ever surface, Parker saved countless lives during a perilous time, considering he operated well after the Fugitive Slave Act passed in 1850.

John P. Parker lived a remarkable life, from starting out as a slave to becoming a respected entrepreneur. Working and employing people in his iron factory by day, and risking his life by night to help runaway slaves, Parker helped people whether in his community or trying to obtain their freedom. Parker’s life illustrates a crucial point in the history of the Underground Railroad. For a long time, historians have focused on white abolitionists and their roles in the Underground Railroad. Recent scholarship, however, has brought light to the crucial roles African-Americans played in the Underground Railroad. John P. Parker passed away in 1900 stating in his will that none of his six children were to inherit his iron factory and woodshop. All of Parker’s children went on to college, started families of their own, and joined the ranks of middle-class America.