The Googleplex is the corporate headquarters complex of Google inc., and the massive physical building serves as a manifestation of the growth of the company from its humble origins at Stanford University in 1996 to the present. Google's rise is also a symbol of the rise of the internet as a form of communication between computers and the humans that design and use them. Google in its 2012 year-end annual report said it had 3.5 million square feet of office space in Mountain View. However, a 1.1 million square-foot Bay View addition, which overlooks San Francisco Bay, began in 2013.

Google's corporate headquarters is known as the "Googleplex" 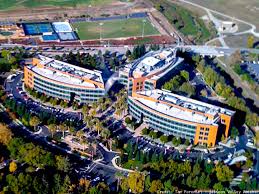 In January 1996, Stanford University PhD candidates Larry Page and Sergey Brin developed the initial idea that would become the Google Search Engine. Prior to that time, traditional search engines tabulated how often search terms appeared on a page, and subsequently ranked websites based on those totals. Page and Brin, in contrast, imagined a search engine that analyzed relationships among websites. Their new "PageRank" system determined a website's relevance based on the frequency in which a website's pages linked back to the original site.

The two originally called the site "BackRub," but later changed it to Google, a play on the mathematical "googal," which is the number 1, followed by 100 zeroes. The idea being that Google could provide a wealth of information. Today, Google isn't just a search engine, but an entire computer, phone and electronics brand. However, the search engine grew so successful that "Google" grew to become a verb -- people often remarked, "Just Google it," meaning that one should seek information via the Google search engine.

Originally, Google operated on the Stanford University's servers through its academic website, but the Google name received its own registration on September 15, 1997. Almost one year later, on September 4, 1998, the two officially started Google, Inc. As is often the case in Silicon Valley, the story of Google starts in a friend's garage -- Susan Wojcicki in Menlo Park, California. Another Stanford PhD candidate, Craig Silverstein, became Google's first employee

Though Google has grown to become one of the most influential businesses of the 21st century, it took needed financing, and a rejection, to realized success. The initial investment came from the co-founder of Sun MicroSystems just prior to Google's incorporation. Moreover, three other investors, including the founder of Amazon.com, helped Google build its business. And then, in 1999, Page and Brin tried to sell their business for a mere $1 million to then-rival Excite -- one of the many emerging search engine sites operating at the time. Excite declined. As of 2017 Google is reported to be worth more than $100 billion dollars while Excite barely exists, having been accumulated by other internet ventures over time.

By 2004, Google had grown so successful that it decided to engage in an Initial Public Offering (IPO). The stock, as of March 2018, sells for more than $1,100 per share, a sign of Google's success, but also how technology has now become the the early 21st century what railroads, coal, steel and large retail was to the late 19th and early 20th century. In fact, in 2002, a television show, Buffy the Vampire Slayer, used the term "Google it," noting how Google had interwoven its way into everyday language. In 2004, Merriam-Webster added the verb, "Google," to its Collegiate Dictionary.

By 2016, Google acquired numerous other smaller companies, operated seventy offices in more than forty countries, and noted by several publications to be the most visited website in the world. In 2013, Google funded a new Bay Area office space that overlooks the San Francisco Bay. But, its GooglePlex remains the place where Google truly grew into, arguably, one of the most influential companies in the world as society concurrently grew ever more tied to its technology.

Castells, Manuel. "The Impact of the Internet on Society: A Global Perspective." Open Mind. February 23, 2014. . https://www.bbvaopenmind.com/en/article/the-impact-of-the-internet-on-society-a-global-perspective/?...