The Battle of Honey Hill was fought by the 55th Massachusetts, a regiment composed of African American soldiers, and Confederate forces from Georgia and South Carolina. General William Tecumseh Sherman wanted to separate Charleston, South Carolina and Savannah, Georgia. The skirmish took place outside of Grahamville, South Carolina. Confederate troops sent back many assaults by Union troops before the Union forces had to retreat. Union forces took on 754 casualties while the Confederacy took around 80-100 casualties. 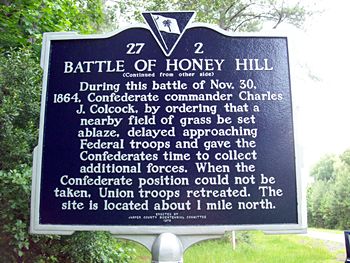 The 55th Massachusetts was a colored regiment comprised of the men left over from the 54th Massachusetts colored regiment. While some men were from Massachusetts, other came from Ohio, Pennsylvania, Indiana, and Illinois. The regiment spent most of their time in South Carolina, however their first battle was in Florida during the Union invasion of the state. The unit would return to South Carolina were they joined the Coast Division and fight at James Island and then Honey Hill.

The battle of Honey Hill was a battle fought just outside of Grahamville, South Carolina. Gen. Sherman wanted to cut off the railroad that combined Savannah, Georgia and Charleston, South Carolina. Units were deployed in November of 1864 and arrived at Hilton Head, South Carolina. Due to weather conditions, the march to cut off the railroad near Grahamville was delayed allowing Confederate troops to enter the area.
The 3rd South Carolina Calvary division sent for support of infantry. Georgia militia were the only troops in the area to help them defend. The 47th Georgia was sent to help support the militia and Calvary but had to endure a long march to the area. Union forces comprised of the 55th Mass, 35th United States Colored Troops (USCT), 25th Ohio, and the 4th Maine Calvary. The 3rd South Carolina and other skirmishers held the Union forces in time to allow Confederate troops to set up defenses on Honey Hill.

Battle began as the 35th USCT charged the hill and was repulsed. This charge was followed by three separate charges by the 55th Mass yet all were repulsed as well. The 25th Ohio followed with an attack on the north side of the hill yet was also repulsed. The 4th Maine Calvary didn’t engage the enemy, but was sent to scout the area north of the Confederate position. Union troops began to retreat around 5 pm that day. Confederate troops didn’t follow due to the fatigue of the troops. Union casualties amounted to 754 killed, missing or wounded. Confederate casualties were around 80-100 men.

Men of the Union forces felt a lack of leadership and coordination by their commanders. Captain Soule of the 55th Mass says, "The generalship displayed was not equal to the soldierly qualities of the troops engaged. There appears to have been a lack of foresight in the preparations." While Captain Mesnard of the 25th Ohio agrees, “Our troops were badly handled, no generalship, strategy or tactics. As a diversion in Sherman's favor the fight may have amounted to a little, but nothing to what it would have if we had brushed the rebs away and cut the Savannah and Charleston Rail Road, as we could have done under an efficient commander.”